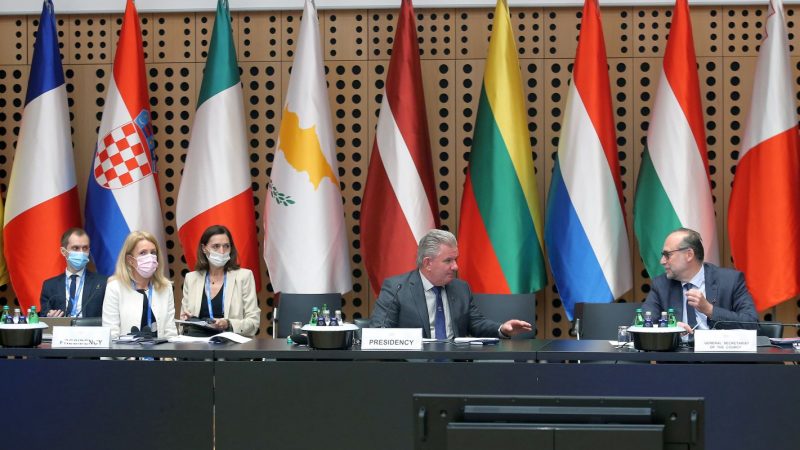 EU environment ministers meeting for an informal session at Brdo pri Kranju have discussed the UN climate conference COP26, to be held in Glasgow in November.

Slovenian Environment Minister Andrej Vizjak said the discussion on Tuesday sought to analyse the situation, the progress achieved and what more needed to be done ahead of the conference.

Vizjak, who chaired the meeting, described the talks, as well as a presentation by the COP26 president Alok Sharma, as exceptionally useful.

Addressing reporters after the afternoon session of the ministerial, Vizjak noted the COP26 conference’s four major goals in bringing about progress in international talks: mitigation, adaptation, finance and cooperation.

As is important the Fit for 55 legislative package, which the ministers discussed in the morning, so is progress at the international level of exceptional importance, Vizjak said.

“The political limelight will definitely be on global ambitions in the field of mitigation, as well as financing commitments and boosting the policy of adaptation to climate change,” said Vizjak.

He noted the role of the EU as the global leader pledging “we will do everything in our power” to achieve concrete results at the conference.

“We all agree that on the one hand, the Paris climate agreement rule book needs to be completed, while on the other hand, discussion will need to be set in motion on financial commitments beyond 2025, in view of the global situation and similar,” he said, calling for raising ambitions on all levels.

He also believes that by the time of the Glasgow conference all international events should be used to prepare and encourage the EU’s global partners as to this global agreement.

One such event will be the meeting of G20 environment ministers in Naples on Thursday with Vizjak calling on the countries to respond to moral authority and leadership by adopting ambitious measures to keep alive the goal of limiting global warming to 1.5 degrees Celsius compared to the pre-industrial age.

“All these events are a valuable platform for exchange of opinions between parties to the agreement at the political and expert levels, so we must do our best to seize the opportunity to enable the best possible outcome in Glasgow,” said Vizjak, pledging for Slovenia to work to the best of its abilities to contribute to concrete outcome of the COP26 conference.

Sharma said he saw the Glasgow summit as a key moment for the whole world. We will all need to prove we are up to the challenge and are on track to curb average rise in temperatures to 1.5 degrees Celsius, he said.

He added that the EU with its diplomatic skills would be key to achieving the goal. He lauded Slovenia for leading by example by publishing a long-term strategy in which it commits to achieve carbon neutrality by 2050.

Sharma called on donor countries during the debate today to increase their financial climate commitments by 2025. He would like countries to set out a clear path ahead of the conference on how to achieve the goal of $100 billion in annual contribution by developed countries to developing countries in climate financing.

Sharma invited Vizjak to a major ministerial in London this week which will aim to establish in more detail what outcome of the Glasgow conference is in fact wanted.