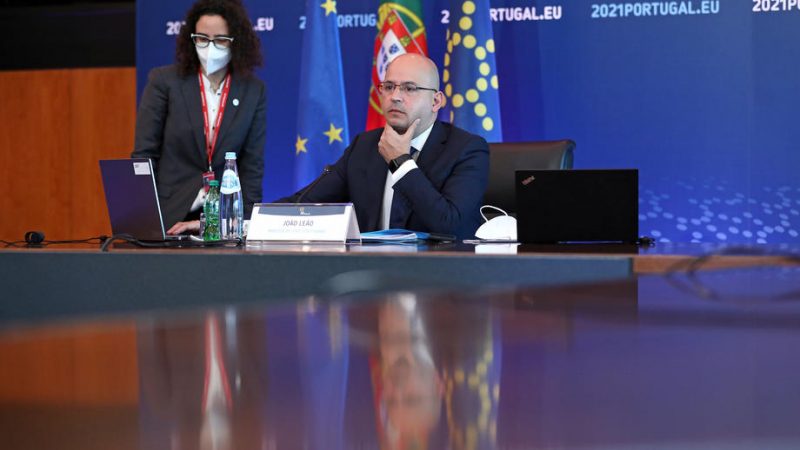 “There is a consensus that Europe cannot risk removing support for the economy prematurely”, he said, adding that since 2022 should still be a year of recovery, it would be logical to keep the escape clause from the budgetary discipline rules contemplated in the Stability and Growth Pact also triggered next year. [EPA-EFE/ANTONIO PEDRO SANTOS]

EU countries agree with the criteria proposed by the European Commission to determine how long budgetary rules should be suspended for and should decide in May to continue the suspension in 2022, Portugal’s finance minister João Leão said on Tuesday (16 March).

“There is a consensus that Europe cannot risk removing support for the economy prematurely,” he said. Since 2022 should still be a year of recovery, he added, it would be logical to keep the escape clause from the budgetary discipline rules in the Stability and Growth Pact also triggered next year.

Portugal holds the rotating presidency of the EU Council until July and Leão chairs the Economic and Financial Affairs Council (Ecofin) of EU27 ministers.

“Regarding economic recovery, member states’ expectations are for a strong acceleration of the economy from the second half of the year onwards, as vaccination campaigns gain pace and containment measures are progressively lifted. The next year, 2022, will also be marked by robust growth,” he said.

“But this will not be the equivalent of recovering the growth trajectory we experienced before the pandemic. We want more, which once again highlights the need to maintain policies that promote growth,” Leão added.

European Commission’s vice-president Valdis Dombrovskis said the level of economic activity in the EU or the euro area compared to pre-crisis levels at the end of 2019 should be the key quantitative criterion for the EU executive’s assessment of whether to deactivate or maintain the application of the derogation clause.

Dombrovskis reiterated at the press conference that the final decision, to be taken in spring, should depend on the overall assessment of the state of the economy, with the key criterion being whether economic performance has returned to pre-crisis levels.

Both officials also indicated that a final decision would be made based on the Commission’s next macroeconomic forecasts in the spring, which Brussels is due to release in early May.

“We will resume the discussion on the general escape clause to foster a consensus on this fundamental issue”, said Leão.

The minister reiterated the idea that the absolute priority in the current context is to help the European economy withstand the COVID-19 crisis, which is not possible without the states’ support.

He stressed that if support for the most vulnerable sectors was not maintained, the EU ran the risk of viable companies becoming insolvent and a temporary crisis leaving permanent scars on the Union’s economies.

“We will do everything we can to avoid this scenario”, Leão said.