In Slovenia, lawmakers from across Europe debate EU’s common foreign and security policy 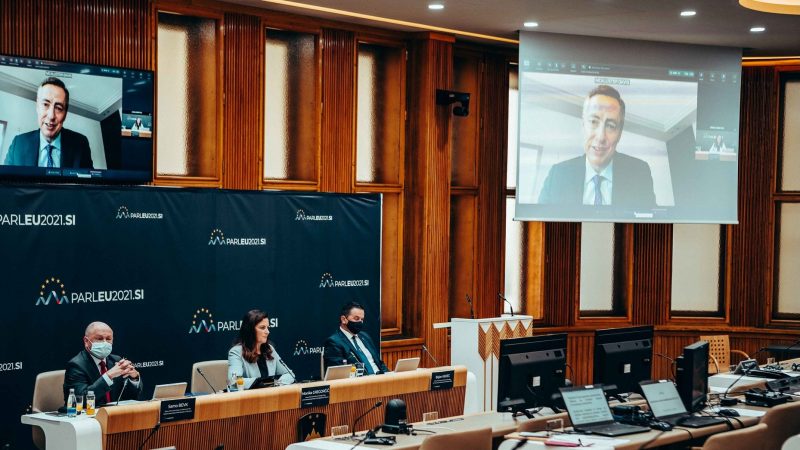 The CFSP/CSDP Interparliamentary Conference at the National Assembly was attended by delegations from EU national parliaments, candidate countries, and non-EU NATO members, as well as members of the European Parliament, and representatives from the European External Action Service (EEAS). [Slovenian Presidency]

An inter-parliamentary conference on the EU’s common foreign and security policy, organised on Thursday (9 September) as part of the Slovenian EU presidency in Ljubljana, heard calls for a united and active approach by the bloc to global challenges.

National Assembly Speaker Igor Zorčič said the EU had to leverage its might as an economic superpower and the largest donor of development aid, noting that no single member state had the ability to tackle global issues such as terrorism or pandemics alone.

National Council President Alojz Kovšca said a common response to crises was also an expression of solidarity between member states.

The importance of the EU reacting fast and effectively was highlighted by President Borut Pahor, who said this was possible only if integration deepens and the EU’s autonomy is strengthened. If the EU remains merely a community of nation states, its power and attractiveness will wane.

According to Pahor, the EU has a responsibility to mitigate conflicts around the world. Afghanistan is one such conflict, and it poses one of the greatest challenges to the bloc’s common foreign and security policy.

Josep Borrell, the EU’s high representative for foreign and security policy, agreed that the Afghanistan crisis could be a catalyst that makes the bloc’s foreign policy stronger.

Borrell stressed that the EU would not recognise Afghanistan’s new government, but said it was nevertheless necessary to engage in talks and coordination, in particular about humanitarian aid, since Afghanistan is facing a “humanitarian crisis of Biblical proportions”.

Both Pahor and Borrell argued that the EU’s strategic resilience had to undergo broad-based improvement in terms of stronger defence and cybersecurity capabilities, digital autonomy and security of critical infrastructure.

The hybrid conference features delegations of parliaments from the EU, member states and NATO members, with panels on the bloc’s foreign policy priorities, the role of the EU’s foreign policy in a multipolar world, and regional partnership with the Western Balkans.

In the panel on the role of the EU’s foreign policy, Foreign Minister Anže Logar said that “Afghanistan is one of the greatest challenges for the international community, which demands a resolute and coordinated response of EU member states.”

He added that the experience with battling the COVID-19 pandemic could be used to get better prepared for future crises, and stressed the importance of effective multilateralism in tackling global challenges, the Foreign Ministry said.

The panel on the Western Balkans featured Defence Minister Matej Tonin, who said it was necessary for the EU to show solidarity with the countries in the region and support them in the accession process.

On the other hand, these countries need to speed up reforms, he said, adding that long-term stability in Europe could be guaranteed only when they joined the EU, the Defence Ministry said in a press release.

One response to “In Slovenia, lawmakers from across Europe debate EU’s common foreign and security policy”