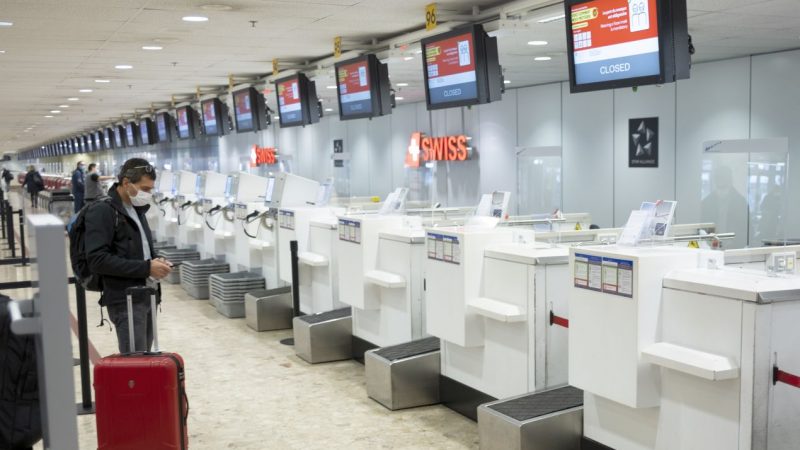 Passenger wearing a face mask waits for check-in at the counter of the Swiss International Air Lines at the Geneva Airport during the second wave of the coronavirus pandemic. [EPA-EFE/LAURENT GILLIERON]

Portugal’s minister of economy and digital transition on told an informal meeting of European Union ministers with responsibility for tourism that, as holder of the EU Council presidency, the country would propose measures to “resume as soon as possible movement” between EU member states.

Pedro Siza Vieira, who was speaking at the opening of an informal meeting by videoconference of EU ministers of tourism, said that measures would be proposed for “the short, medium and long term” aimnig to “resume as soon as possible movement within the European Union.”

These measures, he explained, would also have the aim of “supporting millions of companies, especially SMEs [small amd medium-sized enterprises], to resolve immediate solvency problems” and of helping the tourism sector “transform itself to the new paradigm of sustainability, digital and training of workers.”

Siza Vieira, who was accompanied in the meeting by Portugal’s secretary of state for tourism, Rita Marques, also stressed the need to come up with “clear ideas” to help a sector “that is being most impacted by restrictive measures.”

According to a note issued by Portugal’s presidency, Monday’s meeting was also to address joint efforts by EU members to restore travellers’ confidence as the pandemic is overcome.

The informal meeting was also attended by the EU’s commissioner with responsibility for the internal market, Thierry Breton, the secretary-general of the United Nations World Tourism Organization, Zurab Pololikashvili, and the president of the World Travel and Tourism Council, Gloria Guevara Manzo.