Portuguese FM: EU enlargement could be ‘great achievement’ for Slovenia 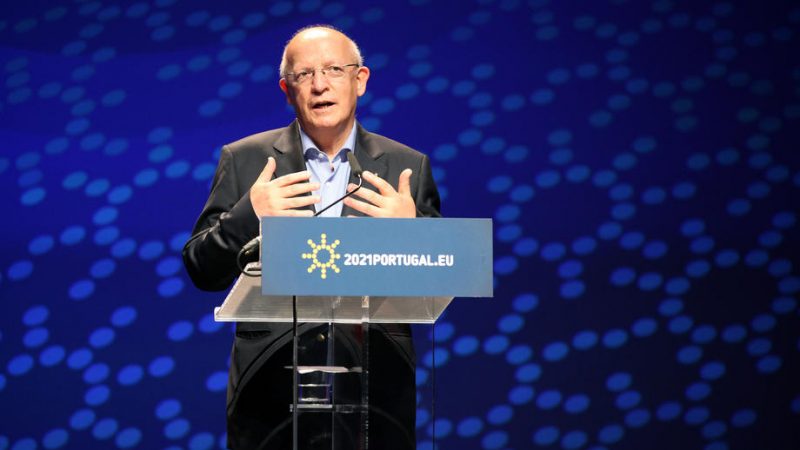 Slovenia, which takes over its second EU Council presidency from Portugal on 1 July, will have to "overcome some obstacles and conclude some negotiations" inherited from the Portuguese presidency. [EPA-EFE/ANTÓNIO PEDRO SANTOS]

Portugal’s foreign minister, Augusto Santos Silva, said on Thursday (24 June) that the launch of EU accession negotiations with North Macedonia and Albania would be “a major achievement” of Slovenia’s upcoming EU Presidency.

Slovenia, which takes over its second EU Council presidency from Portugal on 1 July, will have to “overcome some obstacles and conclude some negotiations” inherited from the Portuguese presidency, Santos Silva said, pointing to the issue of the enlargement of the European project as an example.

“The most important of these processes is enlargement […] We still have a process to conclude to approve the framework for negotiations with North Macedonia and Albania. I believe this will be a great achievement of the Slovenian presidency,” the minister told a joint press conference with his Slovenian counterpart, Anze Logar, in Ljubljana, broadcast on the Internet.

The Slovenian presidency will also be responsible for “finalising processes that are proceeding at a smooth pace”, Santos Silva added, highlighting that “the most important of these processes is the approval of the national recovery and resilience plans” (PRR).

“We expect that the first set of national plans can be formally approved in July. And, of course, the implementation of these processes has to be monitored by the Slovenian presidency, in close cooperation with the European Commission,” he indicated.

Asked about his assessment of Portugal’s fourth presidency of the Council of the EU, Santos Silva pointed to “some results” achieved by Portugal in the five priorities he had defined.

He highlighted “the holding of the Porto Social Summit and the social commitment made there with the European institutions and all the European social partners” as part of the commitment to a social Europe.

As for the digital Europe priority, the minister underlined the inauguration of the ‘Ellalink’ submarine cable, which links Europe to South America, from Sines in Portugal to Fortaleza in Brazil, and which he said represents “a significant advance for the digitalisation of the economy and societies”.

In the context of global Europe, Santos Silva recalled the meeting of EU leaders with India in Porto on 8 May, culminating with the “decision to continue economic negotiations” between the two regions and the “new impetus for transatlantic relations”.

Concerning the Green Europe priority, the minister highlighted the approval of the new European Climate Law, “the first world law that establishes a mandatory commitment in terms of climate action for Europe”.

Santos Silva said he was confident that the Slovenian presidency would be “very successful” and that Portugal would be Slovenia’s “number one supporter” in the next six months.

2 responses to “Portuguese FM: EU enlargement could be ‘great achievement’ for Slovenia”