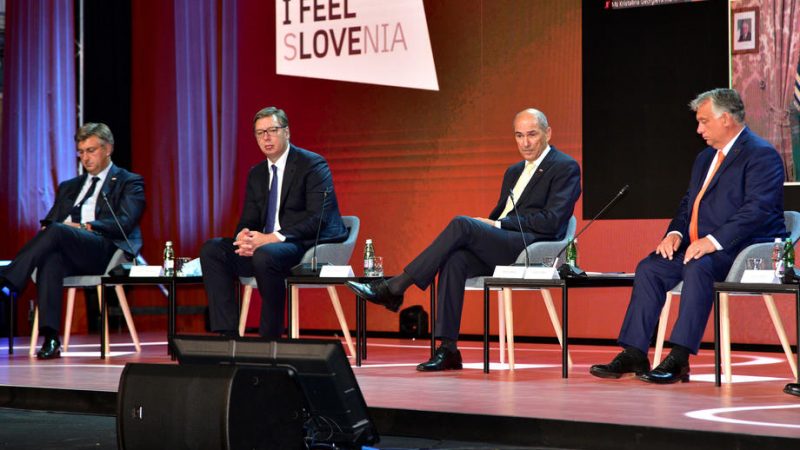 Slovenia’s EU presidency will host an EU-Western Balkans summit in early October and its desire is to make these summits a regular annual event as a means of accelerating the EU enlargement process, Foreign Minister Anže Logar has said.
Such regular summits would represent “an important type of pressure” on countries in the region to achieve headway in accession, while at the same time putting the onus on the EU to make significant steps, Logar told press at the Bled Strategic Forum on Wednesday (1 September).

The comment came in response to the question of what Slovenia had achieved as the presiding EU country to push enlargement ahead and to overcome Bulgaria’s blockade of North Macedonia opening accession talks.

He acknowledged there was a lot of criticism about the EU’s failure to keep its word, but noted that these decisions were adopted by consensus in the EU, which required a lot of diplomatic effort.

“We are doing everything in our power to achieve headway,” he said, but noted that the absence of a government in Bulgaria exacerbated the situation since “one interlocutor is missing.”

Since April, Bulgaria has held two elections and has been unsuccessful in electing a regular government. A third election is looming before the end of the year.

Slovenia will host the EU-Western Balkan summit in October in the framework of its EU presidency.

While stressing the importance and benefits of the EU enlargement to the Western Balkans as a strategically important issue, leaders at a panel on the future of Europe and enlargement agreed that integration of the region into the EU will be crucial.

“The enlargement is a process that has its stages. It is more of an administrative than a political process. However, what we should discuss is how the Western Balkans will become a part of the EU, how it will be integrated politically, economically, in terms of societies and the security architecture. These are the issues for Western Balkans,” said European Commissioner for Enlargement Olivér Várhelyi.

He stressed that countries in the Western Balkans had to be motivated to join the EU. “We have no more time to waste.”

Várhelyi said the Commission envisaged a substantive economic and investment plan for the region.

“We are proposing roughly one-third of GDP of the whole region to invest, almost €30 billion for the entire region to come and deliver in the next four to five years foundational change on the ground for the people and economy – to link up capitals with highways and railways, phase out coal, bring in renewable energy, invest in SMEs, create attractive investment climate, bring broadband internet,” he said.

“This is what Europe is offering. Nobody else is offering this. The implementation of this plan will start this semester,” he said.

Slovenian Prime Minister Janez Janša noted that when the EU was being created, the founding fathers had not spoken about the east and west, but of Europe as a whole. “The enlargement is a tool to achieve this goal,” he said.

He warned against a future without enlargement. The Bulgarian and the Croatian presidencies both wanted to put the enlargement forward during their spells at the helm of the Council of the EU, but other issues were treated as a priority at the time. “That was crisis management, now we need to focus on the strategic issue of enlargement,” he said.

According to Janša, enlargement has to be on the EU agenda all the time, like it had been before Slovenia joined the bloc. “We will do our best to take at least some steps forward.”

Polish Prime Minister Mateusz Morawiecki also called for enlargement as soon as possible, pointing to the alternatives of having Turkey, Russia and China increase their presence in the region.

Albin Kurti, the prime minister of Kosovo, added that the enlargement would make the outer border of the EU smaller by thousands of kilometres, which would be a big plus security-wise. He also said that the enlargement would reunite countries with their diaspora in Western European countries, noting that one in three citizens of Western Balkan countries lived in a Western European country.

Slovenian President Borut Pahor was critical of the lack of progress in the case of North Macedonia, which in his words had done everything to move forward on its EU path but received nothing in return.

The prime minister of North Macedonia, Zoran Zaev, stressed that for his country, there was no other alternative to joining the EU. “We do not have any other family, this is our family,” he said, pointing to the shared values. “We need next steps, for our motivation.”

Šefik Džaferović, a member of the Presidency of Bosnia and Herzegovina, said that a large majority of the people in his country hoped they would join the EU. The reasons are economic, ecological, social, political etc., but there is another very important reason – shared by all six Western Balkan countries.

“We are surrounded by EU members. The enlargement to the Western Balkans will relativise some issues – such as borders and would make life easier for the people. I would say the same goes for NATO membership, although not everyone agrees with this,” he said.

Albanian Prime Minister Edi Rama said he was happy that Western Balkan countries had finally been invited to a talk on the future of Europe in Bled. “We are not seeking a licence to be Europeans. We are Europeans, no matter what Europeans think … We are not talking about membership. But just open accession talks,” he said.

Bulgarian President Rumen Radev said the integration process was a matter of dialogue and consensus. Reforms in various fields are of course a must, but the fundamentals of the EU are the European values, he said. “So when we talk about the enlargement, we must not forget the values. This must be a stable, irreversible process. And to make sure of this, we must return to the values.”

The EU should first offer the perspective of Schengen area membership to Western Balkan countries before they go through the process of EU accession, which is a complex one, Czech PM Andrej Babiš told the Bled Strategic Forum on Wednesday, the Czech News Agency reported.

Babis reiterated his opinion that like EU countries such as Croatia, Bulgaria and Romania – who are currently not part of the Schengen area – Serbia too should be admitted.

According to him, Serbia should be the first Western Balkan country to be admitted because it is on the illegal migration route and actively fights it.

Babiš also said he considered it absurd that Bulgaria has been waiting for 10 years for Schengen enlargement, although it guarded the border in a better way than some Schengen member countries.

He said he believed decision-making in the EU would not be more difficult because of enlargement but noted that reform of EU institutions would be needed.

The first day at the Bled Strategic Forum was accompanied by anti-Janša protests, with protesters unfolding an anti-fascist flag on the Bled island.

“With this, we want to send a clear message that we do not agree with the abuse of power by Janez Janša and his government,” the protesters said, calling on EU leaders and institutions to protect the rule of law in Slovenia.
[Edited by Georgi Gotev]