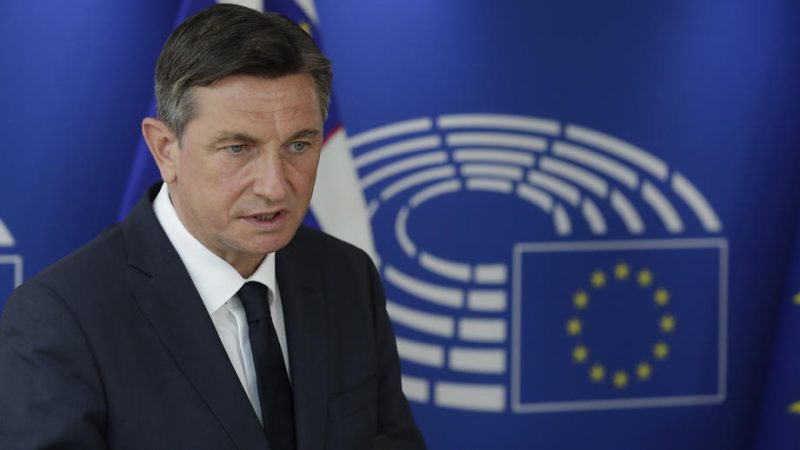 Slovenian President Borut Pahor has said that politicians and public personalities were obliged to refrain from words that could be construed as insulting. [EPA-EFE/OLIVIER HOSLET]

Slovenian President Borut Pahor has criticised Interior Minister Aleš Hojs for using the term “swine” in a comment interpreted as targeting a senior member of the EU Commission, urging the minister to apologise.

Hojs made the comment at a government briefing for Brussels correspondents on Friday (2 July), with the journalists interpreting one of his comments as taking aim at European Commission First Vice President Frans Timmermans.

The journalists confronted Hojs about the “do not cast pearls before swine” comment he made on Twitter about the Yellow Jackets, a far-right group linked to neo-Nazis which was removed by police from recent anti-government protests.

The minister responded by saying he did not refer to anyone as “swine” and later added that, taking into account what was said when the College of European Commissioners visited Slovenia, his comment might as well apply to a key player in the EU administration.

The journalists’ first impression was that this was probably an allusion to Timmermans, who boycotted the 1 July family photo because of Prime Minister Janez Janša’s comments about links between Slovenian judges and the Social Democrats (SD).

Pahor said that politicians and public personalities were obliged to refrain from words that could be construed as insulting.

“Especially when he speaks not only on his own behalf, on behalf of the government and our country, but on behalf of the Council, he must be extra careful […] We don’t need to agree, he does not need to present a position that is necessarily acceptable for all, but it must be uttered respectfully,” the president added.

Hojs retorted that all explanations and apologies had been communicated to the Commission and that additional input was not necessary. He said he had not compared anyone personally to a swine and had definitely not had Timmermans in mind.

Subsequent statements by Hojs on Twitter indicate that his comment was targeted at Slovenia’s member of the European Commission, Janez Lenarčič, whom Hojs as well as the pro-government broadcaster Nova24TV have accused of having acted against the interest of the country by trying to hold up funding under the national recovery and resilience plan.

The Commission has said the plan, which was formally confirmed on 1 July, was endorsed unanimously and there had been no opposition to it.