By Sarantis Michalopoulos and Sebastijan R. Maček | EURACTIV.com and sta.si 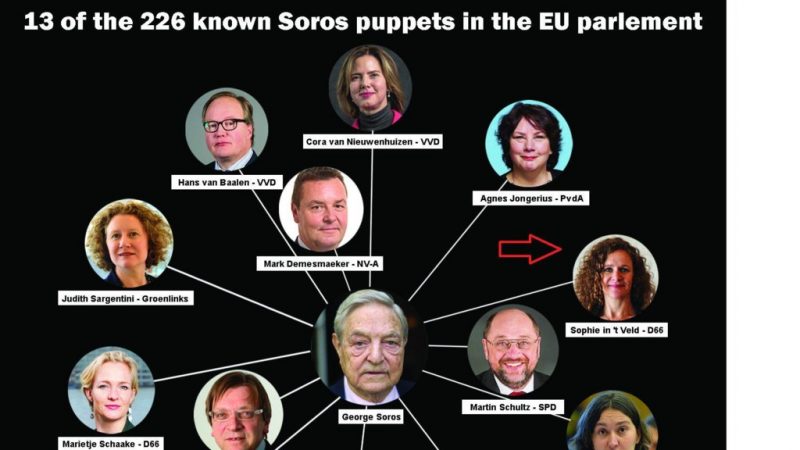 Janša, who has often accused political opponents of being on Soros’s payroll, has since deleted the tweet. [Photo by Twitter]

Prime Minister Janez Janša is facing criticism after tweeting that some MEPs are “Soros puppets”. The MEP’s under attack included Sophie in ‘t Veld, the chair of a fact-finding mission currently examining Slovenia’s compliance with the rule of law and media freedom covenants.

“A constructive collaboration with the rotating Council Presidency can only be based on mutual trust and respect,” he said.

The statement came after Janša tweeted an image with the heading “13 of the 226 known Soros puppets in the EU parliament”, referring to Hungarian billionaire George Soros.

Janša, who has often accused political opponents of being on Soros’s payroll, has since deleted the tweet.

Twitter sleuths have traced the image he tweeted to a radical hate blog.

Some of the people in the image are no longer MEPs and one, Hans van Baalen, passed away in April.

Dutch Prime Minister Mark Rutte described it as “tasteless” adding that “the government just conveyed this same sentiment to the Slovenian ambassador in The Hague.”

Liberal EU lawmaker Guy Verhofstadt called on Janša not to spread anti-semitic, anti-democratic, and anti-EU conspiracy theories that are “boosted by people whose strings are pulled by Putin”.

“This has no place in any democracy and certainly not in the EU!” Verhofstadt tweeted.

Janša is a ‘coward’

Before his ‘Soros puppets’ tweet, Janša also attacked the leftist opposition LEVICA party on Twitter, saying its members represent “the political wing of the terrorist #antifa”.

Leftist MEP Kostas Arvanitis from GUE-NGL described the attack as “creepy and brazen” and called Janša cowardly for not answering EU lawmakers’ questions on the rule of law in Slovenia.

Arvanitis said the Slovenian PM cancelled, at the last minute, his participation in a meeting with MEPs from the EU Parliament’s Working Group on Democracy, Rule of Law and Fundamental Rights Monitoring Group (DRFMG).

“It’s a cowardly attack, because in the prospect of being confronted with the questions of the DRFMG in which I participate, regarding the accusations of corruption, interference in the Judiciary and attempts to manipulate the press, the Prime Minister cancelled the scheduled meeting at the last minute,” the MEP said.

He added that in the past, Janša also avoided joining a similar meeting and instead sent a pre-recorded video.

“The elected by EU citizens representatives do not accept bullying neither via videos nor via Twitter. We would expect the Slovenian PM to have the courage to tell these things in person,” Arvanitis concluded.

The EPP group was already preparing to vote on Fidesz suspension after years of disagreement on several issues.

Orbán has always created headaches for the EU centre-right family, and critics suggest that Janša intends to play the EPP’s “black sheep” role.

Last week, the Slovenian PM backed Warsaw in its legal spat with the EU.

A Polish court has challenged the primacy of EU law over national law, and Janša accused the European Commission of political abuse over the rule of law.

In the EPP, many pro-European politicians fear that after the defeat of Germany’s conservatives in the last elections, ultra-conservatives such as Janša will seek to take advantage of the momentum and push the EPP further right