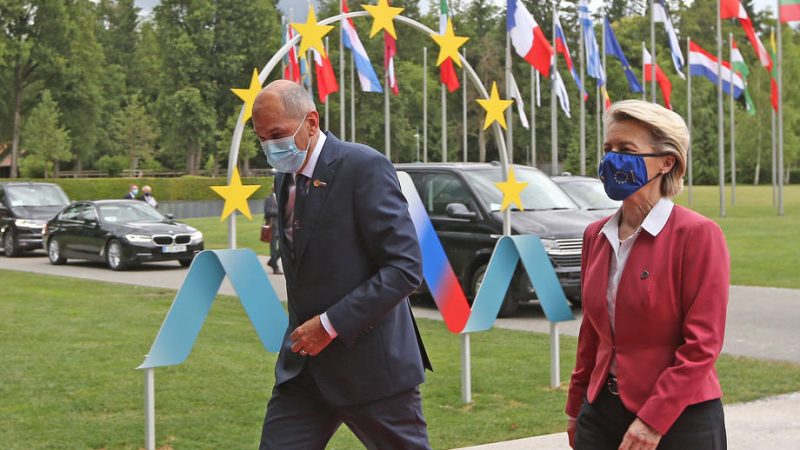 Slovenian Prime Minister Janez Janša: "The EU must talk about this and face the fact that soft power alone does not help here." [EPA-EFE/TOMI LOMBAR]

Slovenia’s Prime Minister Janez Janša has told the country’s parliament that the EU must come up with strategic answers to strategic challenges, working both on its soft and hard power to become a major player regionally and globally.

The bloc has for years been dealing mainly with the consequences of a lack of strategic answers and the time had now come for the EU to “refocus on looking for strategic answers to strategic questions,” Janša said as he presented the presidency’s agenda to MPs on 5 July.

He said Slovenia’s goal for the Conference on the Future of Europe was an exchange of views on open foreign-policy and security issues that are key “if the EU wants to become the main regional player in Europe, its neighbourhood and the Mediterranean, where its role is currently significantly challenged, and in particular if it wants to become a global player.”

Noting that Europe was becoming demographically weaker while birth rates in sub-Saharan Africa were surging, Janša said Europe faced “a very simple dilemma: either it helps these nations in Africa and helps create a system where these people see a future […] or it builds walls and sets up maritime blockades in the Mediterranean, for these people will look for a better life.”

“The EU must talk about this and face the fact that soft power alone does not help here,” he added.

Janša said debates on whether the EU needed its own army and whether it also needed hard power had been going on for too long,” Janša said.

“It has turned out that if the EU is incapable of combining the potentials of soft and hard power, such as in Africa, suffering and poverty will spread. If the EU does think in a half-baked way – like it did in Libya, where the country was shattered – and does not provide for people’s security so that they can democratically decide their own future, we do more evil than good,” the prime minister said.