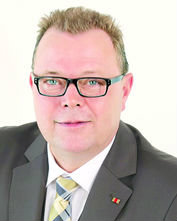 Michael Stübgen, the European affairs spokesman for Germany's Christian Democratic Union (CDU), downplayed expectations that Germany will shift right in the European elections, but did agree that populist currents would be more strongly represented in the next European Parliament. He spoke to EURACTIV Germany in an interview.

Michael Stübgen has been a member of the German Bundestag since 1990, and chairman of the CDU/CSU faction’s European affairs working group since 2005. He spoke with EURACTIV Germany’s Daniel Tost.

Note: The text below is a translation. Click here to read the original German version.

The CDU’s draft agenda was not sparing on its criticism of Brussels. The document said it was unreasonable for EU officials to decide whether olive oil dispensers are allowed on restaurant tables or what parasols in beer gardens should look like. Is this your party’s way of reacting to growing Euroscepticism in Germany?

We always had a detailed subsidiarity article in our European election agenda as well as in our Bundestag election agenda. The parasol topic was already mentioned five years ago. And those are only examples. We consciously chose these examples because, in the case of the olive oil dispensers as well as the parasol case, legislation was proposed but not implemented. Either it did not get through the European Parliament or in some cases even failed beforehand.

These examples demonstrate that impractical things do come up but they also serve as a reminder that such wrong suggestions can be prevented. Other than that, I cannot determine whether we are being more critical with our European election agenda than we were before.

The AfD could cost the CDU a considerable amount of votes in the upcoming European elections. Is the European election agenda also an attempt at taking a clear position regarding the eurosceptic AfD?

We’ve already done that! On the issue of the eurocrisis in particular, we have taken a clear course and are simply confirming this again in the agenda. In the agenda we can also demonstrate, contrary to the opinion of sceptics and those who have repeatedly predicted the demise of the euro, that the course we have taken in the German government on the eurocrisis has stood the test. This is not overly spectacular, but we are presenting it once again and are focusing on that point.

Europe’s political agenda in the coming years is that we must fight the crisis in crisis countries so that growth can be restored there, youth unemployment is reduced and so on. Those are the main points that are included in our agenda. But these are not primarily a reaction to the AfD, instead they are reactions to the crisis and a response to the current situation in Europe.

In many places, populist parties are on the rise. Fear is growing over the possibility that right- and left-wing populist parties could gain decisive influence following this year’s European elections. Is a clear commitment to the euro currency enough to differentiate oneself from populists and sceptics?

With regard to Germany, I do not believe we will have a shift to the right in the European elections. Given the results of the Bundestag elections, that can be analysed quite closely: all across Germany, the AfD was very loud, very critical and very populist.

But I have seen the AfD’s draft for their European election agenda and it is by far not so populist as before. Even they are rerouting somewhat.

Furthermore, if you look at the election outcome and consider the fact that we had a four-year eurocrisis with considerable exaggerations and critical news reporting in the media, the AfD’s results in the Bundestag elections are rather modest. I assume that it will be similar in the European elections.

Meanwhile, it must be understood that we cannot yet be sure if we still have the 3% threshold. Traditionally, the European elections have had low voter participation rates. This means that radical movements always come out stronger than in the Bundestag or regional elections, for example. That could mean a bit more or a bit less for the AfD, percentage-wise. But there is no sign whatsoever that it would change Germany’s European policy with double-digit-percentages.

A second point which is important to recognise: Of course the fact is that in countries like Greece, Portugal or Italy and Spain – that have been crisis-ridden for years – Euroscepticism is stronger among the people because the population continues to be unsettled. Thus, it is likely that populist currents will be more strongly represented in the next European Parliament.

The European Commission should work more effectively, the CDU draft agenda says. Decisions must be “streamlined and become comprehensible”. But that would imply treaty changes, which could possibly lie in the distant future. How can this be a defining topic in an election campaign?

According to the German agenda, which is significantly guided by the CDU and Merkel, we must first take a look at the implementation of the European semester, the growth pact and the banking union before considering where treaty changes are necessary.

But this is only concerning small treaty amendments. They must be implemented in the foreseeable future. The larger goal of treaty reform is farther off in the distance. Still, we offer a few pieces of advice on what can be done.

In the meantime it is now 28 countries that must agree on this and there, long-term agreement is needed. That is not directly on the agenda. That is why the term “major treaty reform” is kept rather on the edge of our agenda as a more distant goal.

With its draft, the CDU is breaking away from its sister party the CSU, which is calling for a 50% reduction in the number of EU Commissioners. What is behind the CDU’s considerations?

The drastic reduction of the Commission was laid out in the Lisbon Treaty. Albeit with a clause stating that the European Council could lift the requirement. That is just what it did last year. I observed that move quite critically, but such is state of our treaty for now.

In contrast to the CSU, we are choosing a different path in our agenda that, based on experiences of how the Commission works, will enable us to approach the goal of a necessary streamlining of competences and more transparency of competences. On the one hand we are saying: The member states want to have their Commissioner. Incidently, that is also the case in Germany.

On the other hand, it won’t be the case that every Commissioner is just allocated any competence in any given way, and then it only appears to be a competence. After all, this could be more concentrated on particular fields.

That too, is already an old thought. I think a concept like this will help us approach streamlining the Commission’s work even quicker and even better than if we open up the [CSU’s] topic “we need considerably less Commissioners”. In that case, small member states would be the first to rightfully fear that they no longer have a Commissioner.

To strengthen closer engagement with citizens, the draft says it must “be possible to return competences to the national level”. Which competences are you thinking of?

There is a discussion over this return of competences in Europe and we are picking up on this in our agenda. It has enjoyed the sustained support of the United Kingdom for many years.

At the same time, one must keep in mind that they are in the phase of making a fundamental decision: Do they want to stay in Europe or not? For me it would be important that they stay there. But the same discussion is going on in many places and I think we are right to address this.

Here, I do not have a concrete competence in mind. In the case of olive oil dispensers or parasols or countless other examples it is not about Europe having too much competence. Instead it concerns the fact that, in many draft proposals, the competence has been incorrectly, amateurishly and absurdly carried out. That is the more deciding factor. During a major treaty reform, one can certainly consider whether certain things are better taken from Europe.