Bart De Wever will struggle to form a Belgian government 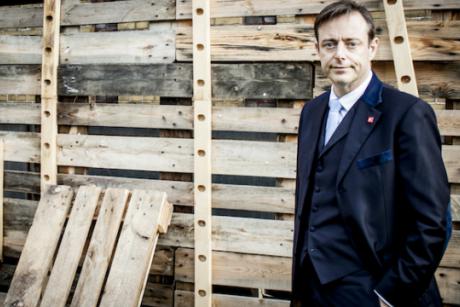 King Philippe of Belgium has given the Flemish separatist, Bart De Wever, more time to set up a federal government. Local coalitions are well under way, but common ground at a federal level will be difficult to find. EURACTIV France reports.

“As requested by the informer, [Bart De Wever’s] mission has been extended. He will present his conclusions to the King on 17 June,” the Belgian royal palace told the press on 10 June.

Two weeks after the start of his mission, the President of the N-VA, a Flemish separatist party, requested more time. Bart De Wever’s objective is to gather all opinions and political wills from different Belgian parties in order to establish a new government. Called the “informer,” this is no easy job.

The country is split. The Flemish in northern Belgium voted for right-wing parties, while francophones in the south of the country voted for the left. The N-VA, which advocates a liberal and conservative political programme, received 30% of the Flemish vote. The Francophone Socialist Party (PS) came out on top in Wallonie and Brussels (see background).

It is unlikely that the PS or the N-VA will be able to form a coalition government together. The political programmes pushed by both parties are diametrically opposite. The N-VA wants to stop unemployment benefits when someone has been unemployed for a certain amount of time, and suspend automatic index-linking in setting wages, two areas where the Socialist Party will not budge.

Bart De Wever has tried to go around the socialists by building a centre-right government. However, the former Speaker of the House of Representatives, André Flahaut (PS), said that it was crucial for the federal government to receive support from a majority of francophone representatives.

“Francophones must bear in mind that entering a government which is not supported by a francophone majority would lethally reduce the political influence of francophones, Walloons and the people of Brussels,” he said on the Belgian TV.

Thanks to King Philippe’s decision, Bart De Wever can continue talks towards establishing a centre-right government with the N-VA, the liberals and the Christian-Democrats, but not the socialists.

At a local level, things are well under way. The German-speaking community was the first to set up a government on 29 May, when Olivier Paasch became its new Minister-President.

The PS announced on 5 June that it would try to establish a Walloon government with the centrist party, CDH, in an attempt to stop it becoming isolated at federal level. These two parties are also strong in Brussels, as well as the FDF, a political movement to defend the interests of French-speakers.

When the next mandate comes to an end, the liberal party (MR) will have spent a total of 15 years as opposition at a regional level. Its President, Charles Michel, expressed concern during a TV debate on 8 June: “The PS and the CDH, with the help of the FDF, are undermining the stability of the country.”

The N-VA and the CD&V responded the next day by announcing that they would unite to form a Flemish government. The Flemish liberal party, Open Vld, would also remain in the opposition. The Party’s President, Gwendolyn Rutten, told a Belgian news agency (VRT) that she would either work with the Flemish and Federal governments or the opposition.

“We have definitely chosen to pursue talks without the liberals even though there was the possibility of forming a government with the centre-right by leaving out the PS,” she said.

With 531,030 preferential votes and a personal score of 12.6% in his constituency, Guy Verhofstadt, the European liberals’ main candidate, was the most popular Belgian candidate in the European elections.

Like numerous European countries, Belgium lost seats when the total number of MEPs reduced from 766 to 751. There are now 21 Belgian MEPs.

The N-VA, who is part of the European Greens, saw its number of MEPs jump from one to four. The newly elected MEP for the Greens, Bart Staes, told EURACTIV that the N-VA will leave the European Green group. The Flemish separatists are likely to join the conservative ECR group, but all options are still on the table.

>> Read: Will Flemish separatists save the Tories in Europe?

The 25 May 2014 was an important date in Belgian politics. Belgians voted in the European, federal and regional elections.

As the polls predicted, the N-VA, Belgium's Flemish separatist party, came out on top. Bart De Wever's party won over 30% of the Flemish vote. Others profited from the fall of the Flemish far-right and Eurosceptic party, Vlaams Belang. The governmental parties (socialists, liberals and Christian-Democrats) saw a return to relative stability after the elections. The francophone Green party lost half of their electorate, whilst two representatives from the far-left won a place in the Belgian parliament for the first time.

Government coalitions are taken shape on all three levels. King Philippe gave Bart De Wever the mission of sussing out what coalition was possible at a federal level. The difference in results between the north and the south of the country and existing political disagreements will make his job extremely difficult.