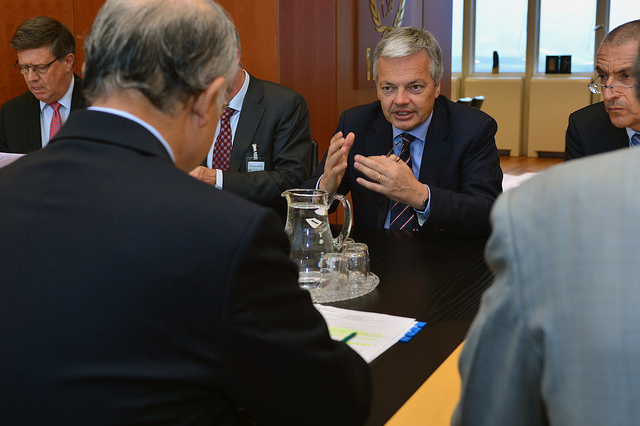 Didier Reynders is Belgium's outgoing deputy prime minister and foreign minister. He is also a former finance minister but, crucially for Jean-Claude Juncker, he is not a woman. 12 May 2013. [Dean Calma/IAEA/Flickr]

Belgium will defy Jean-Claude Juncker tomorrow (4 September) by nominating outgoing Deputy Prime Minister Didier Reynders as its next Commissioner, despite the European Commission President-elect’s wishes for a female candidate.

Juncker will punish Belgium with the peripheral job of education, multiculturalism, multilingualism and youth, according to sources close to Reynders’ rival for the nomination Marianne Thyssen. The post, currently held by Cyprus, would be a major snub for a country putting forward its outgoing deputy prime minister and foreign minister.

Juncker is pushing for Thyssen, a Flemish Christian Democrat (CD&V) MEP, to be selected as he struggles to get enough women commissioners in his new team.

Thyssen was hotly tipped to take the extremely influential competition portfolio, if selected, according to reports in today’s Financial Times (3 September).

Belgian media reported earlier this week claims by rival politicians that Juncker “hates” Reynders. The men are alleged to have clashed when Juncker was head of the Eurogroup meeting of eurozone finance ministers and Reynders was Belgium’s finance minister.

Juncker was forced to promise top jobs and Commission vice-presidencies to countries putting forward women to join his team. He currently has only seven female candidates, while the outgoing Commission had nine women Commissioners.

The European Parliament has warned it will not approve an executive that is not gender balanced and a campaign for “ten or more” female Commissioners is ongoing.

Juncker is interviewing candidate Commissioners this week. The European Commission said today he would publish a list of candidates next week.

Thursday deadline to make it official

Earlier this week, Juncker set a Thursday deadline for Belgium to make its choice, reportedly accusing the country of “paralysing Europe” by dithering over the nomination. The choice for Reynders was reported today in Belgian media, citing high-ranking sources in the parties currently negotiating to form a coalition government.

While not yet officially announced, the deal will reportedly be rubber-stamped tonight, ahead of tomorrow’s deadline.

Horse-trading over top jobs in Belgian politics between those parties led to Reynders’ nomination, despite his alleged turbulent history with the former Luxembourgish PM.

The commissioner post is up for grabs in the midst of ongoing negotiations to form a government.  The possible centre-right coalition government could involve Thyssen’s Flemish CD&V, the Flemish nationalist N-VA, the Flemish liberal Open VLD and Reynders’ liberal party, the French-speaking Mouvement Réformateur (MR).

The CD&V were behind Thyssen, arguing that gender and the party’s good relationship with Juncker  would guarantee her a top job.

But the MR gave the CD&V a choice, either supply the commissioner or the prime minister in the new Belgian government.

The prime minister’s job was too good to pass up for a party with less than 20% of the vote in May’s national elections, and the CD&V agreed to sacrifice Thyssen to benefit Kris Peeters.

Reynders’ nomination also suits the MR. MR Chairman Charles Michel, leading the coalition talks, and Reynders have fought for control of the party for many years.

The Brussels job neatly solves the problem of what to do with a high-ranking big beast, who is unlikely to want to be demoted to just a minister and who could cause trouble down the line.

He was put forward again by the Flemish liberals the Open VLD. The Open VLD is the smallest party in the putative coalition, and lacks the influence to force through his nomination.

Commission President-elect Jean-Claude Juncker is expected to announce the full list of Commissioners next week but he is struggling to get enough female candidates in his team.

Belgium's nomination Didier Reynders, the result of horse-trading in talks between national parties to form a coalition government, is set to be announced tomorrow. He will be picked ahead of Marianne Thyssen at a meeting tonight (3 September).

Juncker will next present a second list outlining who gets which portfolio.  Currently member states are putting pressure on him to obtain important portfolios for their commissioners.