Choosing the future President of the European Commission only motivated 5% of voters in the May 2014 elections. Germany, Luxembourg and Austria were the only countries to show slightly more interest in the presidential race between the two main candidates, Jean-Claude Juncker and Martin Schulz. euractiv.fr reports.

The democratic innovation of the Lisbon Treaty failed to inspire a majority of eligible European voters during the EU elections in May 2014. In a post-electoral survey on voter motivation, only 5% of those questioned across the 28 member states said that they were motivated by the chance “to influence the choice of the President of the European Commission”.

Interest was above average in Luxembourg and Germany, the home countries of the two main candidates for the European Commission presidency, Jean-Claude Juncker and Martin Schulz, reaching 10% in both countries. In Austria, 12% of those surveyed said the presidential race was at least a part of their motivation to vote. In France the figure was 5%, equal to the European average, while in the United Kingdom, it was only 1%. 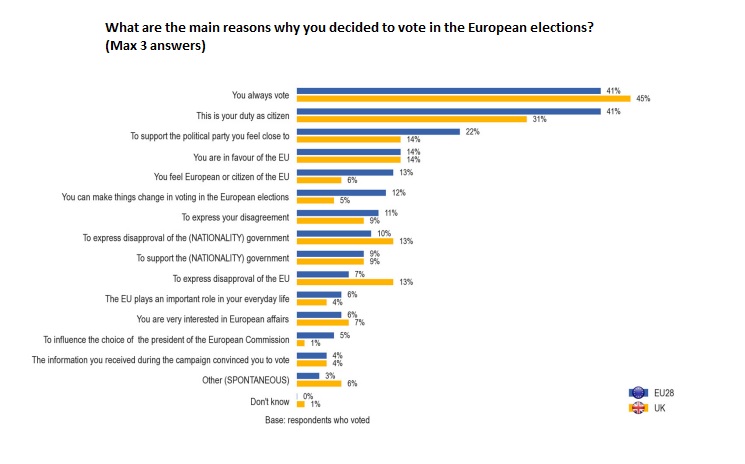 This survey was carried out for the European Parliament by TNS Opinion, who questioned 27,331 European voters in order to determine the democratic impact of the 2009 Lisbon treaty.

In line with the European Council proposal, the Parliament elected the President of the Commission, taking into account the results of the European elections. Political parties seized on this new system in the run-up to the elections, presenting their presidential candidates in an attempt to trigger an increase in voter turnout. 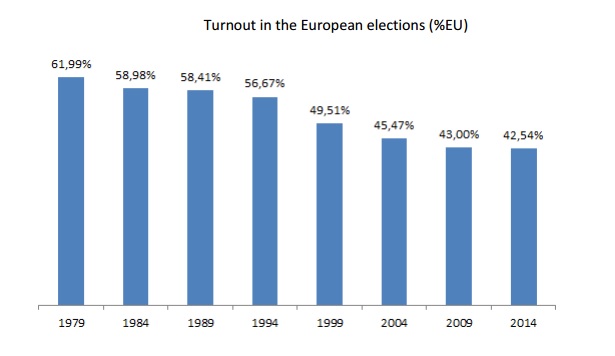 The European average hides significant disparities between the member states. Topping the turnout table with 89.6% is Belgium, where voting is compulsory. 76.5 points behind in 28th place is Slovakia, with 13.1%.

As in 2009, the main reasons citizens gave for voting in the 2014 European elections were that they always vote (41%), they felt it was their duty as a citizen (41%), and that they wanted to support a particular political party (22%).

The Eurobarometer reveals a decline in “purely European” reasons why people went to the ballot box. Only 14% ticked the box to say they were “in favour of the EU”, a fall of 2 points since the 2009 elections.

The number of voters citing the reason that they “can make things change in voting in the European elections” also fell by 7 points, to 12%, and feeling “European or a citizen of the EU” played a role in only 13% of citizens’ decisions to vote.

Dwindling confidence in the institutions

If the majority of those questioned tend to view the European Union in a positive light, the survey exposed an erosion of confidence in the European Institutions.

Confidence is now lower in 15 member states than it was in 2009, with the greatest differences visible in those countries worst affected by the crisis, like Greece, Spain, Italy and Portugal.

Of all the countries to have received financial assistance from the EU, Ireland is the only one not to have suffered a significant loss of confidence.

Turnout played an important role in the results of the 8th European elections. Turnout fell from almost 62% to 43% between 1979 and 2009.

Confidence in the EU has also hit historical lows in recent years. The European Parliament led a large-scale social media campaign to encourage more citizens to use their vote.

The selection of candidates for the presidency of the European Commission was also publicised as part of the same campaign.