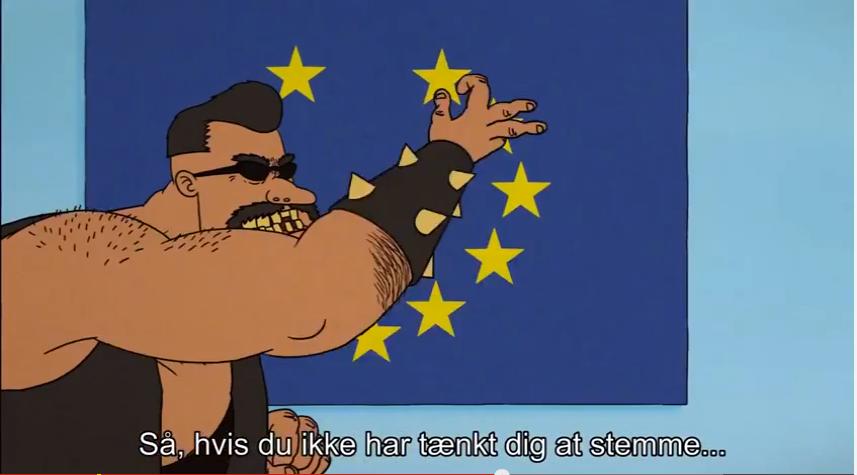 The Danish parliament has withdrawn a cartoon video featuring a scene of group sex and a non-voter being punched in the face that was aimed at motivating young people to vote in European parliamentary elections.

The cartoon, posted on the parliament’s Facebook and YouTube sites, had led to protests both from politicians, and users of social media.

The video portrayed a “superhero” named Voteman. First pictured in bed with five women, he then rushes off using dolphins as skis to ensure people vote in the election.

Voteman punches and throws one non-voter into a poll booth, and interrupts another couple in bed before throwing them out of the window.

“It’s extremely degrading to women, and I don’t understand what it is they want with this video. I want to know how much money they have spent on it,” said Özlem Cekic, a member of the Socialist’s People’s Party, speaking on Danish news channel DR.

Anders Samuelsen, the leader of the Liberal Alliance party, said the video didn’t make any sense, and criticised the chairman of the Danish parliament, Mogens Lykketoft, for having giving the green light to produce it. “You are talking down to people with this video. It’s at such an amazing low level, and I’m shocked that the Parliament chairman has approved it,” Samuelsen told the Ritzau news service.

Lykketoft later wrote an email to the members of parliament explaining the decision.

“I acknowledge that the parliament as an institution, should be more careful in the future about what we put our name on,” he said. However, he added the Parliament’s administration had discussed the video before its publication and found it harmless. The message is more important than the means, he argued.

“It’s meant for young people who like watching these kind of cartoons and don’t care if there is an election. It’s very important that we get a higher turnout, especially among young voters. We need to use whatever means we can,” Lykketoft told DR.

The Danish Parliament’s EU Information and Communication unit was behind the video. Martin Jørgensen, the unit’s coordinator, told Denmark’s TV2 that the aim was to hit first-time voters.

“The idea is to make young people aware of the election and the election date. This is a target group which is really difficult to reach and if this can work virally, it can be both surprising and original. This is what we have wanted with this video,” Jørgensen said.

The Lisbon Treaty states that the European Parliament shall elect the Commission President on the basis of a proposal made by the European Council, taking into account the European elections (Article 17, Paragraph 7 of the TEU). This will apply for the first time in the 2014 elections.