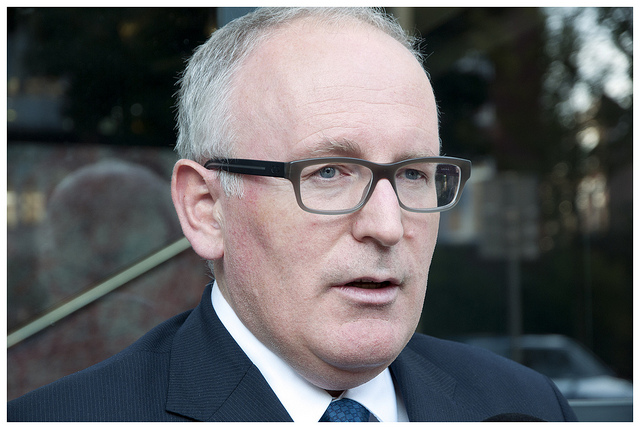 The Netherlands has named Frans Timmermans as the next Dutch Commissioner, after the centre-left foreign minister was interviewed by Jean-Claude Juncker in Brussels today (2 September).

Timmermans gained international prominence after he pronounced a widely-admired speech at the United Nations, following the crash of Malaysian Airlines flight MH17 in Eastern Ukraine on 17 July. The plane, shot down by Russian-backed separatists with a surface-to-air missile, had 196 Dutch nationals on board.

The speech was credited with convincing many EU countries to back tougher sanctions against Russia. Those sanctions appear set to be hardened again after increased Russian aggression towards Ukraine last week.

Mark Rutte, the Dutch prime minister, confirmed Timmermans’ nomination and said the politician has the qualities to hold an influential position in Juncker’s new Commission. The Dutch hope that by sending one of their big beasts, they can secure a vice-presidency in the Commission.

”The nomination is part of the government strategy to receive an important post in the Commission. I am convinced he will play an important role,” Rutte said.

Juncker is meeting the nominees of each EU country before he decides on the portfolios allocation. Competition for the top jobs is intense as each of the 28 member states puts forward a commissioner.

Timmermans’ background in foreign affairs and the fact he is a fluent Russian speaker could be given a new eastern policy “super Commissioner” role.

But he would rank second after the newly appointed EU foreign policy chief, Italian Foreign Minister Federica Mogherini, who will also be a vice-president of the Commission.

Timmermans, foreign minister since 2012 and a former diplomat at the Dutch embassy in Moscow, is being linked with the institutional affairs portfolio, currently held by Slovakia’s Maroš Šef?ovi?.

He has worked at the European Commission before as assistant to Dutch Commissioner Hans van den Broek and will be the first Dutch Labour Party commissioner in many years, after a long line of conservatives.

Some analysts believe the Dutch put forward their candidate too late to get one of the top jobs and Juncker’s struggle to find female candidates for his new team may count against Timmermans.

European Parliament President Martin Schulz has repeatedly warned that MEPs would reject a Commission that did not have enough women. Timmermans’ predecessor, outgoing commissioner Neelie Kroes, signed an open letter to Juncker to nominate at least ”ten or more” women.

“This doesn’t have much chance of succeeding, especially because Juncker is having a problem finding enough female candidates.”

Jeroen Dijsselbloem, who heads the Eurogroup of eurozone finance ministers, was mentioned earlier as a possible candidate, as was Lilianne Ploumen, the trade and development minister.

Commission President-elect Jean-Claude Juncker is expected to announce the full list of Commissioners within the next week.

The second step is that Juncker will present a second list outlining who gets which portfolio.  Currently member states are putting pressure on him to obtain important portfolios for their Commissioners.