Elections 2014: Liberals vow to stand-up for Europe, keep UK ‘in’ 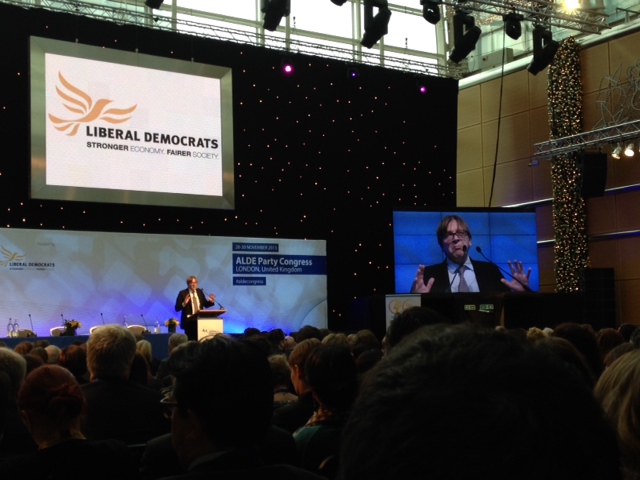 Gathering in London for a three-day Congress over the weekend (28-30 November) to set the tone for the European election campaign, European liberal democrats have promised to crusade against the "cheap" populists and stand up for a united Europe, with the UK ‘in’.

Liberal leaders made the case for a change in Europe, underscoring the need for a forceful campaign that would present the party's vision for the future, showcase its recent achievements and rebuff populistic claims.

“We are entering into a very challenging campaign,” said Guy Verhofstadt, the leader of the ALDE liberal group in the European Parliament, who started gearing up for the campaign trail.

Verhofstadt is one of the two liberals who have already informally thrown their hat in the ring for the Commission presidency.

Rising euroscepticism on both sides of the political spectrum is pushing mainstream parties to adopt dangerous populistic discourse, he said. “But between the eurosceptics of the Tories and the eurofrigids of Labour, we shall win."

Liberals vowed, however, to attempt to reform the 28-country bloc into a more democratic union, approaching federalism. Verhostadt spoke of federalism somewhat in jest, trying to smooth the edge off his initial vision and bring on board those in his party that opposed the idea of a "superstate".

His push for federalism has indeed divided the party. Recently, the Dutch liberal politician and former EU commissioner Frits Bolkestein launched a scathing attack against Verhofstadt, saying that he was a greater danger to the European Union than eurosceptics.

In London, Verhofstadt tweaked his vision, telling fellow delegates that his obsession was not federalism.

He continued: “My obsession is not to create a superstate, more centralisation, more bureaucracy. I am fighting for the opposite: a democratic union, efficient, accountable union.”

The leader of the ALDE group said that the added value of the EU rested on the fact that some challenges could not be tackled by the nation state alone. Yet, the Union of today was not fit to tackle global challenges.

“We are stuck in a model of the past, looking for the answer of the challenges of tomorrow in the textbooks of yesterday,” he insisted.

However, if the past can point to future trends, the liberals could do well at the next elections, if they manage to convince the traditional base of voters that they are the ‘real reformers’ they say they are.

Currently they have eight commissioners, three prime ministers and are in coalition governments in 12 EU countries, including the UK. They have also influenced many EU policies in the last five years, having often been the kingmaker of the larger political groups in the European Parliament.

In the European Parliament, they have pushed both for budgetary restraint and structural reforms to stimulate growth and jobs in crisis-hit countries. They fought for more funding for research and development and played a role in demanding a responsible banking system that takes on the burden of its failure, rather than resting on European taxpayers. They also formed part of the Parliament group that demanded a response to NSA spying.

Many of these actions are reflected in the manifesto adopted on the weekend (30 November) and will be used as arguments to battle eurosceptics on a ‘reformed Europe’.

Clegg: Leaving Europe would be ‘unpatriotic’

“We have to make the case for a united Europe, over and over again,” said UK Deputy Prime Minister and UK LibDem leader Nick Clegg.

Remembering the fall of the Berlin Wall, Clegg underlined the remarkable power of attraction that the idea of pooling sovereignty had on countries that were once behind the iron curtain.

“The European Union is the most sophisticated response to the challenges of globalisation. A challenge that did not exist in the 40s and 50s. But it is now by far the most powerful agent for change in the world,” he said.

Underscoring the ravaging consequences of the economic crisis, Clegg insisted that the only way forward was openness.

“As millions of our citizens are suffering from probably the greatest crisis the world has ever seen, the response to that should be more cooperation”, rather than to turn inwards, Clegg said making the case for the UK to remain in the EU.

“It is beguiling when you have parties say: We can remove all of these anxieties by turning the clock back [..] but if we were to follow their remedy the country will become poorer, unemployment will go up, crime would go up, influence of Britain will go down, investment in this country will go down. In other words, it would be deeply unpatriotic, far from standing up for Britain and betraying the vital interests of this country,” he said to journalists in a press conference after the opening of the congress.

Populist parties are doing well in opinion polls, fuelled by high unemployment and a widespread distrust of the EU institutions. The news that populist right-wing parties of The Netherlands, France, Belgium, Austria and other countries will form a coalition towards next May’s EU elections, have also raised the stakes of the election campaigns for mainstream parties. In the coming months, these parties will clarify the common programmes or ‘manifestos’, on which to base their common campaign and for national parties to use in national campaigns.