Daniela Vincenti in Brussels and Laurens Cerulus in Maastricht 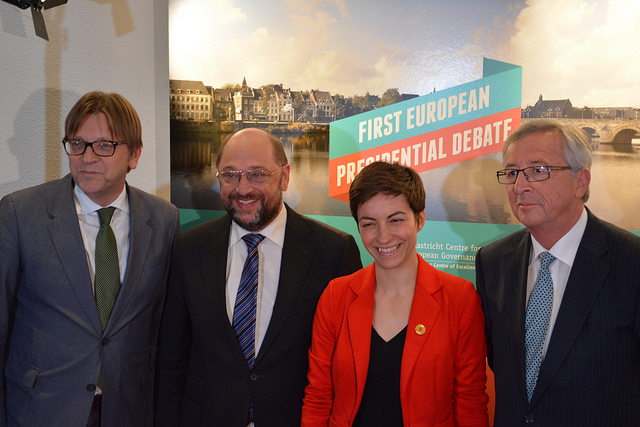 European Commission President candidates ahead of the presidential debate in Maastricht

The first European presidential debate on Monday evening (28 April) in Maastricht turned out to be more of a warm-up session than a real contest of ‘visions’ for the future of Europe.

With less than four weeks to go before polls open on 22-25 May, the parties’ main candidates for the EU Commission presidency faced each other in the first of a series of ‘Presidential Debates‘.

Aired by Euronews, in partnership with the Dutch Maastricht University, the European Youth Forum and EURACTIV, among others, the first debate was not as groundbreaking as anticipated, and seemed more of a cozy parliamentary debate among old rivals, than a genuine presidential contest.

“There was perhaps some overlap between the different candidates, and not so much differences in their positions. But at least you see the different candidates – the human faces behind the campaign – and I think that is important,” said Professor Thomas Christiansen of the European Institute Politics and member of the steering committee for the now dubbed ‘Maastricht debate’.

In the past, the Commission president has been appointed in horse-trading between the EU’s 28 governments. For the first time, five European parties have nominated a campaign figurehead, or ‘Spitzenkandidat’, who serves as their candidate to head the EU executive.

Putting such ‘faces’ on the pan-European campaigns is hoped to counter decreasing voter turnout.

However, despite the novelty of the exercise, the candidates failed to impress. “For the ordinary voters, a lot of things may remain obscure,” said Christiansen.

“It is a bit of a political show – it is entertainment to some extent. But [these elections] won’t influence the overall policy line. That is not how the EU works. People will have to compromise. That is perhaps a bit of a shame, and could create some disillusionment further down the road,” he added.

The debate revolved around issues that interest voters. It started with jobs, and ended with foreign policy and energy security.

Even though differences blurred, the four candidates tried to reassert their leitmotif for the campaign.

“I am campaigning for a Europe that creates jobs and growth without spending money we don’t have,” said Jean-Claude Juncker, the former Luxembourg prime minister, representing the centre-right European People’s Party, which is marginally ahead of the centre-left Socialists and Democrats, in polls.

The centre-right candidate, who chaired the euro zone’s finance ministers’ meetings during the crisis, a role that opened him up for criticism, tried to clear his legacy by saying that he did not have a project of austerity. “I am in favour of sound public finances because there is no growth without sound public finances.”

European Parliament President Martin Schulz, the Socialists and Democrat candidate, insisted instead that more money should be spent helping young people find jobs, pushing for a credit programme that would allow companies to employ young people, an argument that was also underlined by Green candidate, the 32-year old German MEP Ska Keller, who sees investing in the green economy as a way to boost employment.

“It is not just about jobs – jobs are very important. But it also matters how the voices of people are being heard,” Keller said.

Despite their eagerness to impress, the candidates failed to reassure, at least on tackling unemployment. “The crucial question, the first question, on youth unemployment disappointed me. I had expected a little bit more than them saying what is in their programmes,” European Youth Forum’s secretary general, Giuseppe Porcaro, told EURACTIV.

Despite no clear winners in the debate, the liberal candidate and former Belgian prime minister, Guy Verhofstadt, seems to have been the one that was able to clarify best his vision for the future of Europe.

“I was quite impressed with Guy Verhofstadt and his unashamed defence of a federal Europe,” said Christiansen.

Verhofstadt repeatedly said he advocates a more integrated Europe, but not the creation of a superstate. Winking an eye at centre-right voters, Verhofstadt stated, “We need less regulation on the single market, but at the same time we need more common policies,” mentioning the banking union, the energy community and a defense common policy.

In his closing remark, Juncker, who seemed to let the others take centre stage during most of the debate, reasserted his intention to ‘reunite Europe’ by further developing the social dimension of the single market, and the monetary union.

Schulz, who said he wanted to be the president of people not governments, stressed there was a need for reversing the policies of the centre-right, which has been in power for the last five years, and contributed to the rise of populism.

Commenting after the debate, the candidates complained about the format and time constraints, which did not allow for further developing ideas.

“I have looked at the social media attention and it seems that people looked and listened, and they understood the core messages,” Schulz told EURACTIV.

“We talked about foreign policy, energy, immigration. At times, it was vivid. You have to debate in a way that the audience doesn’t fall asleep. I don’t think that the two candidates from the largest parties Schulz and Juncker] would have succeeded in doing that. I think the audience wouldn’t have stayed awake,” added Verhofstadt.

The next presidential debate will take place in Florence on 9 May.

Guy Verhofstadt, leader of the ALDE group and liberal candidate for European Commission President warned EU leaders against choosing another candidate than the one campaigning in the EU elections: “If the heads of state chose someone else, I say: no way. We’ll close down the European Parliament if that happens. It will not pass.”

“In the past ten years, the political leaders haven’t put forward Europe [as a solution] against what eurosceptics are saying. Public opinion is also shaped by political leaders; when they are successful in doing that, they win elections, if not they lose.”

“I attacked Jean-Claude Juncker [on Berlusconi being a member of the EPP party] because I like him. I agree with him, but his party has in the family Berlusconi who is against the euro, Orban who is changing the constitution every five minutes. Then it is difficult to come here and say you’re serious about Europe. And I feel people have to know this.”

“What I tried to do is say that conservatives and socialists don’t have the vision for Europe any more. My programme has elements saying we don’t need new debt, but we need more integration in the banking market, the capital market, the energy market, the market of digital services. Use this leap forward in integration as an engine for growth. Delors did it with the internal market.”

Ska Keller, the Green candidate, added: “I don’t think there is a consensus on digital rights. All the other parties really want to have the free trade agreement with the US, TTIP. Even if they’re careful in this debate, if you look at their voting behavior they are very much supporting it. And they are not mentioning the NSA spying scandal.”

“On an issue like Ukraine, it is important that we’re not starting up a whole campaign. This is a very serious issue and I’m happy that all of us said: peace and dialogue are the main points. Those should really be at the core of our foreign policy.”

Julian Priestley, campaign adviser to Schulz hoted:  “The previous Commission [if led by Martin Schulz] would have been much more sensitive of the social consequences and would not have allowed the troika to pursue a policy to cut public spending, whether it is good or bad.”

"It is time for Europe to change. People are frustrated by the policies of the past five years. We have talked for 5 years about billion euro bailouts and million euro mechanisms. But want to change the lives of ordinary people who are worried about their next 1000 euros”, said Martin Schulz.

Schulz gave a tough verdict on the legacy of the conservative decisions of the last 5 years and the austerity policies overseen by Jean-Claude Juncker as Chair of the Eurogroup:
"We don't need a democracy that adapts to a market as Ms. Merkel wants but rather a market that serves democracy", said Schulz.

European parties’ single candidates for the next European Commission presidency face each other in five televised and one radio debate in the weeks preceding the EU elections on 22-25 May. The debates aim to galvanise attention on mainstream parties and possibly boost turnout.

Apart from Martin Schulz and Jean-Claude Juncker, the debates will involve (depending on the setting) the liberal candidate Guy Verhofstadt, the two Green candidates Ska Keller and José Bové and the candidate of the Party of the European left Alexis Tsipras.

The debates with at least four candidate are held in Florence, Maastricht and Brussels, while the two frontrunners also debate in Brussels, Hamburg and Berlin. The European Broadcasting Union (EBU), the alliance of public service media across Europe, is organising a debate at the European Parliament in Brussels on 15 May, dubbed #TellEUROPE.

>>For an overview of all presidential debates, please read our infographic.