Far right MEP: ‘A parliamentary group is on the horizon’ 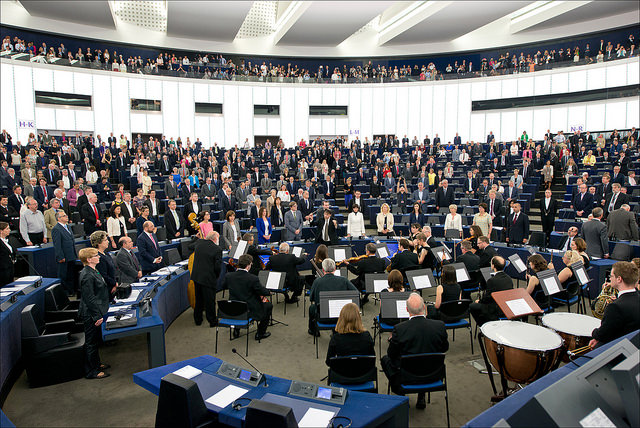 Marie-Christine Arnautu and her fellow National Front MEPs refused to stand for the European anthem at the opening of the new European Parliament (1 July). In an interview with EURACTIV France, she explained why and stressed that a far right parliamentary group is on the horizon.

Marie-Christine Arnautu is part of the National Front’s new and stronger delegation to the European Parliament. Voted in by France’s South-West constituency, she is not new to France’s most popular far right and now largest European party. Jean-Marie Le Pen is the godfather of her child and she is an old family friend.

Both of the EU election‘s big winners, UKIP and the National Front, stood out on the opening day of the European Parliament. Nigel Farage’s UKIP caused a stir when they turned their back on the orchestra playing the Europe’s unofficial hymen, Beethoven’s Ode to Joy.

“I don’t think anyone from the delegation would have had the reflex to do anything else,” added the new MEP. She admits that the National Front is prone to causing “polemics”. Gilles Pargneaux, a French Socialist MEP, called the stunt “totally disrespectful.”

Group on the horizon

The National Front triumphed in May’s EU elections, which saw the party win 25% of the vote and increased their delegation from four to 24 MEPs. Yet, there are still question marks over the influence the Front National will be able to exert on the European centre stage.

Parties had until 24 June to file requests to form a group, which would have increased the parties’ influence in negotiations and secured more financing from the Parliament.

Le Pen and Geert Wilders, leader of the Dutch Party for Freedom, had managed to garner more than the required number of MEPs to be part of their group but only had parties from six countries. They needed seven. The Front National did not manage to form a group in time, but Marine Le Pen has vowed to continue her efforts.

Arnautu echoed that and said that forming a group was not just a matter of maths. Although the National Front could have allied with the Polish Party KNP, their political differences were too great to overcome.

“I cannot tell you that it will happen in a few days, weeks or months,” she said.

Some believe that if forming the group takes too long, some Eurosceptic MEPs may leave their party behind and join other groups. Arnautu played down the risk of mutiny within her party.

Yet the risk is real. Joelle Bergeron, 64, left the party two days after the EU elections. Marine Le Pen asked her to leave her seat in favour of another candidate. Bergeron refused and chose to join Nigel Farage’s new Europe of Freedom and Democracy Group as an independent instead.

‘National Front has never been sectarian in its voting’

Arnautu worked on the Ile-de-France Regional Council for more than ten years, and said she is used to finding common ground with other parties, even if other parties do not always return the favour. She does not rule out voting for left wing amendments in order to form majorities in parliamentary committees.

She will be sitting on the committees for transport and tourism, and employment and social affairs.

>> Read the full interview in French

Newly elected MEPs sat in the Brussels on 1 July 2014. This was the first time since the May 25 European elections, which saw a surge in support for Eurosceptic parties.

Their first session focused on re-electing Martin Schulz as the President of the European Parliament.

0 responses to “Far right MEP: ‘A parliamentary group is on the horizon’”