Few differences between Schulz and Juncker in German TV debate 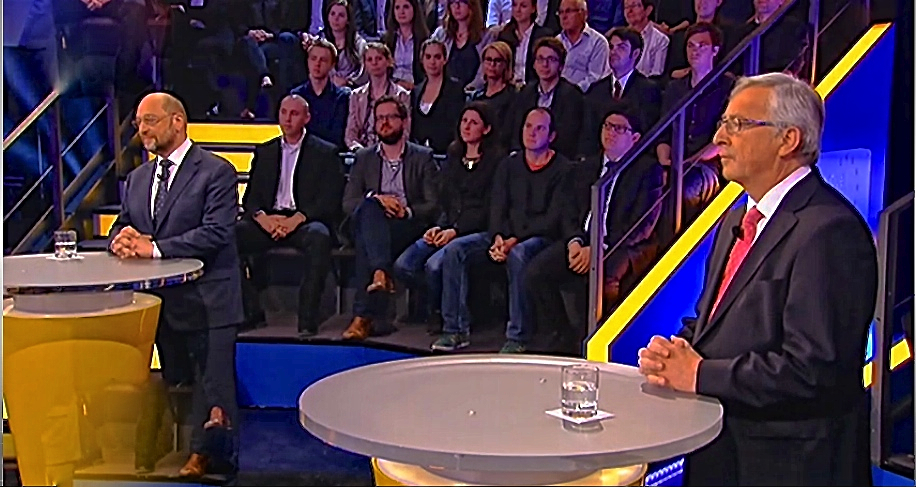 During the first German TV duel between Martin Schulz and Jean-Claude Juncker, the search to find differences between the two candidates for Commission Presidency continued. EURACTIV Germany reports.

On Thursday evening (8 May), centre-right Jean-Claude Juncker and Social Democrat Martin Schulz faced off in Berlin for the first TV duel in German broadcast on German and Austrian public television. Similarly to their first debate in Brussels one month ago, the candidates had a hard time trying to carve out policy differences between each other.

Initially, both candidates were asked to explain why the other should not become Commission President. Schulz, outgoing president of the European Parliament, stated that Juncker stood for a Europe “holding meetings behind closed doors where the powerful come together and discuss far into the night only to subsequently tell their subjects on what they have not reached an agreement.”

He had only first met Schulz behind closed doors, replied Juncker, former Luxembourg prime minister and chairman of the Eurogroup, adding that he had always made an effort to tell “the true story”.

In the debate about the current crisis in Ukraine, it turned out to be hard to find any disagreement between the two politicians. “On the question of war or peace, there is no difference between us,” Schulz explained. “Why should we act as if we do not agree,” Juncker asked. After all, an election campaign was not to be mistaken for the organizing of a mass brawl without reason.

Thus, unity was also the overall theme on the topic of enlargement. Both opposed the admission of new member states. “We cannot cope with any enlargement rounds in the foreseeable future,” said Schulz. “I am against admitting further members into the European Union in the next five years,” Juncker added. “We are not ready for admission.”

The debate turned somewhat more confrontational when Juncker directly asked Schulz if he was for or against Turkey joining the European Union. “Mr. Schulz, it would be good if you could get used to the idea that some problems in Europe need to be looked at in a more differentiated way than just with a yes or no.”

During the topic of the ECB’s current policy of low interest rates, one of the moderators pointed out that “we would really like to carve out where you both are not so close together”. The sharpest contrast came up during the debate about fiscal policy. Juncker explained that Europe needed minimum rates for the taxation of companies but that there was also a necessity for tax competition. Schulz immediately interrupted: “I strongly disagree.” Competition among member states for the lowest tax would only lead to profit for “big capital owners”.

Finally, the candidates were asked what their main project as Commission President would be. For Schulz, it is tackling youth unemployment. “It is destroying the fabric of the countries where it is rampant. If these countries fall then we all fall with them,” he said. Juncker kept it short: “Enduring growth, ergo stable public finances.”

According to a recent survey, Schulz has an approval rating of 41 percent in Germany, Juncker 24 percent. There is hardly time to debate about who won the TV duel in Berlin. Juncker and Schulz will be facing off again this evening at 18.30, debating the state of the European Union in Florence Italy, together with Guy Verhofstadt for the liberals and José Bové for the Greens.

In France, candidates for the European elections are many, especially due to few obstacles that prevent participating. Political parties just have to present 20 candidates (10 candidates and 10 extras) and respect the rules of parity. In other countries, like Germany, parties have to obtain a certain number of signatures to be a validated candidate. However, lists in France that receive less than 5% are automatically removed from the race, which limits the amount of small parties that enter the European Parliament.