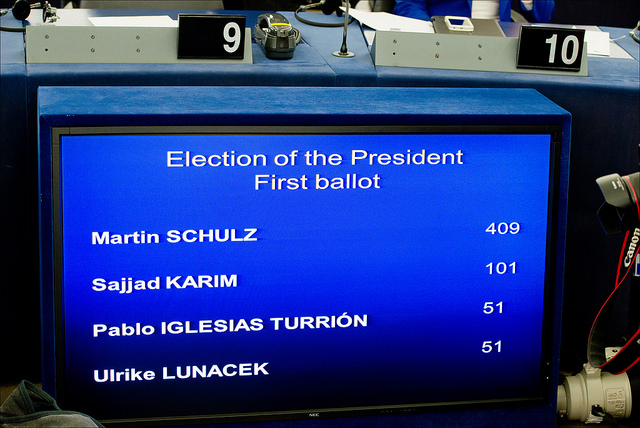 Martin Schulz was re-elected as President of the EU Parliament, followed by Sajjid Karim from the ECR group. [European Parliament/Flickr]

France only managed to secure two committee chairs, compared to four during the last legislature. France’s biggest delegation, the National Front, did not take part in the bargaining process because they failed to form a parliamentary group, whilst the Tories’ Conservative group increases its bargaining position. EURACTIV France reports.

The distribution of key jobs in the new European Parliament should be completed on Thursday (3 July) when the Assembly votes on the parliamentary committee jobs.

The distribution has to be approved by the MEPs, but deals have already been struck. France has definitely come out worse for wear.

The budget and fishery committees are important for France, but they will come as little consolation.

Alain Lamassoure: “There are less of us than the Poles!”

During the last term, there were four French legislators presiding over committees.

Pervenche Béres from the French Socialist Party was chair of the employment and social affairs committee, Alain Lamassoure in charge the budget committee, the Green’s Eva Joly for the development committee, and Arnaud Danjean (EPP) for the sub-committee on security and defence.

This time around, the French Socialist did not get any committee chairs, choosing instead to concentrate their efforts to make Sylvie Guillaume one of the 14 vice-presidents of the Parliament. The number of French Green MEPs dropped significantly and they failed to secure a committee chair. There is still hope that they may get one at the half-way point of the legislature.

“We have a real lack of influence at the heart of the European institutions,” said Alain Lamassoure, president of the French European People’s Party delegation.

The centre-right MEP Jérôme Lavrilleux, who has been mixed up in the Bygmalion Affair and accused of fraud in the financing of Nicolas Sarkozy’s presidential election campaign in 2012, will take his seat in the European Parliament and benefit from parliamentary immunity. He will be a member of the employment and social affairs committee.

The rise of the British conservatives

The European Conservatives and Reformists Group (ECR), which has replaced ALDE as the third largest group in Parliament (with 70 MEPs), took over a significant number of key jobs.

“ECR is Eurosceptic, but is playing by the Parliament’s rules,” said Alain Lamassoure. It now has a good bargaining position for the negotiations between parliamentary groups.

Thanks to greater influence, it has secured chair of the interior market and consumer protection committee and the security and defence committee.

Poland’s Karol Adam Karskin was nominated as one of the five Quaestors, those in charge of administrative issues which directly affect MEPs.

Head of the ECR group and candidate for President of the Parliament, Sajjad Karim impressed everyone by winning more votes than the number of MEPs in his group (101). This put him in second place after Martin Schulz, who was re-elected for a second term at the helm of the Parliament thanks to a coalition with the Socialists (S&D), the right (EPP) and the liberals (ALDE).

After electing their president, MEPs also had to elect 14 vice-presidents. Germany got two vice-presidencies, as well as the presidency with Martin Schulz. Italy and Romania also secured two seats, whereas France only got one with Sylvie Guillaume.

ALDE negotiated their way to two vice-presidencies (for Olli Rehn and Alexander Graf Lambsdorff) by backing the Socialist and EPP coalition.

In exchange, ALDE, now the Parliament’s fourth largest group with 67 MEPs, agreed to support Schulz’s presidency bid and an EPP candidate in the mid-term presidency election in 2017.

Despite their rise in numbers after successful EU elections, none of the 100 Eurosceptic MEPs secured a top job in the Parliament.

Having failed to form a parliamentary group, the National Front’s MEPs will continue to sit with the 52 non-affiliated MEPs, of which they make up about half. This means they have been left out of negotiations which are key in reconstitution sessions.

Even though the National Front is the largest delegation of French MEPs, not one of their members will be chair of a committee or sub-committee.

Things are not much better with Nigel Farage’s Europe of Freedom and Direct Democracy (EFDD). With 48 MEPs, the EFDD secured the presidency of just one committee: the petitions committee, in charge of examining petitions submitted by European citizens. France’s Joelle Bergeron, who ran as a National Front candidate, but left to join Nigel Farage’s group, will sit on this committee.

Newly elected MEPs gather in the Brussels on 1 July 2014. This is the first time since the May 25 European elections. Their first session focuses on electing the President of the European Parliament.

In the case of the Parliament presidency, this is often shared between the two largest European political factions: the centre-right EPP (221 seats) and the socialist S&D (191 seats).