French and Austrian MEPs earn the most from external activities

The EU must stop treating the rule of law and democracy in its member countries as a taboo subject. It should be discussed openly and impartially, writes Michal Šimečka. [European Parliament/Flickr]

Transparency International has published statistics on declarations of financial interests made by the 751 Members of the European Parliament. The Parliament’s centre and right wing are the highest earners. EURACTIV France reports.

Transparency International’s database is the first resource to shed light on the earnings of MEPs from activities outside their European Parliament mandate. While the average monthly income of the members from external activities is €646, the highest earners, according to Transparency, are the Austrians, with an average of 2400 euros, followed by the French, with €1821 on average.

4 of the 12 MEPs declaring an income greater than 10,000 euros per month from external activities come from France. These are Michèle Alliot-Marie, Rachida Dati and Renaud Muselier from the European People’s Party, and Sylvie Goulard from the centrist ALDE.

This list can be partly explained by looking at the criteria for declarations of financial interests: the European Parliament only takes into account income from the previous 12 months. Michèle Alliot-Marie and Renaud Muselier only discovered they were on the list for the European elections in January 2014, and were both otherwise employed at the time.

Renaud Muselier, a doctor, declared the highest potential income range of the 751 MEPs: his shares in a medical clinic earn him between €12,000 and 35,000s euro per month.

Rachida Dati declared a monthly income of at least €10,000 from her activity as a lawyer and her second mandate as mayor of Paris’ 7th arrondissement.

The former minister Michèle Alliot-Marie, who has served in several French governments, has the distinction of being the only MEP to declare that she would lose money by taking up a position in the European Parliament. She declared an income of at least 15,000 euros per month. “The financial interests only concern the last 12 months, and of course Michèle Alliot-Marie has stopped taking part in international conferences in 2014, which were previously her largest source of revenue,” her parliamentary assistant stated, adding that Ms Alliot-Marie’s income would suffer a further cut as her French parliamentary and ministerial pension would be suspended during her term in Brussels.

The French MEP is one of the rare politicians to earn money from writing, declaring a monthly income between €5,000 and 10,000 euros from “contributions to several publications,” according to her collaborator. Her book A Woman at the Heart of State Power sold 7000 copies.

The ALDE MEP Sylvie Goulard is part of an American think tank, the Nicolas Berggruen Institute, whose aim is to promote the interests of Europe across the Atlantic. This position, she stressed, is “compatible” with her mandate. Ms Goulard also pointed out that she had mistakenly declared her gross income, not the net income that was required.

Even the wealthiest of the French MEPs are left far behind by Parliament’s highest earners. The Italian Renato Soru, who was the head of telecoms operator Tiscali until his election, and who continues to hold a token position in the company, and the Romanian Daniel Buda, who is a notary and a university professor, are two notable examples. Also among the MEPs with the most lucrative external activities are three Austrians with dual elected mandates in their own country.

The non-aligned MEPs, of which almost half belong to the French National Front, are the highest-earning parliamentary group, with a monthly average of at least €1361 per member from activities not related to their parliamentary mandate. This is twice the average of the EP as a whole and eight times higher than the Greens, at the other end of the rankings with 170 euros per member.

In second place is the centrist ALDE group, with an average of €1079 per month, followed by the centre-right EPP, with €887.Members of the eurosceptic EFDD group, led by Nigel Farage, earn an average of €505 per month from external activities. The average is €376 for the social-democrats of the S&D group and the conservatives of the ECR, and €231 for members of the radical left GUE/NGL group.

The principle problem with this study of parliamentarians’ income is the accuracy of the data. Transparency International obtained their information from the European Parliament’s declarations of members’ interests, whose accuracy leaves a lot to be desired. Unlike the declarations of interest made by Members of the French Parliament, which are examined by the High Authority for Transparency in Public Life, those made in the European Parliament tend to be taken at face value.

Former French Minister for Education Vincent Peillon declared his European Parliament salary in the category of external activities. Others appear to have suffered from amnesia: 7 MEPs made no declaration at all, implying that they had neither employment nor income before their election to the European Parliament. 46 members declared revenues below €1000 per month, of which 8 had been members of the previous legislature with monthly salaries of almost 8000 euros.

“The problem is that some members play the game and others simply do not… in certain countries they hardly fill in their declarations at all, so comparisons are not necessarily worth a great deal,” an MEP told EURACTIV France. According to the European Parliament’s code of conduct, members are “personally responsible for submitting a declaration of financial interests”. Measures can be taken against those who violate these rules, although in practice this is very rare.

“We can see some broad tendencies: the Danish, German and Dutch members give very accurate declarations, while the Belgian, French and Austrian members take the process less seriously,” Daniel Freund from Transparency International stated.

The case for reform

The system of declaring members’ interests in the European Parliament can only be of limited use while the rules are not observed by all 751 MEPs.

Transparency raised questions over the way in which the declarations are carried out and the imprecision of the financial data, saying “the most import conclusion we can draw from this database is that the MEPs’ Code of Conduct needs to be reformed”.

For some purists, a declaration of interests will only be complete when accompanied by a properly examined declaration of members’ assets. The only MEPs currently subjected to this level of scrutiny are the French, whose assets declarations are still being examined and so remain unavailable. 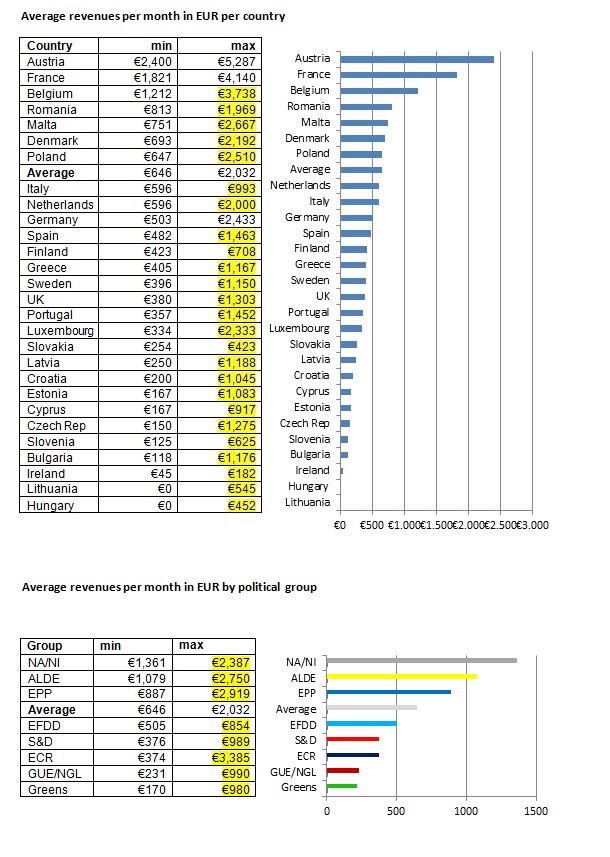 The Members of the European Parliament elected in 2014 are subject to a more rigorous code of conduct. In order to avoid conflicts of interest, the MEPs are required to declare their external activities.

In addition to their initial declaration, MEPs must also give details to the European Parliament of any invitations, presents or expenses-paid trips they accept, as well as the names of their hosts, no later than one month after the event.