Aline Robert for EURACTIV.fr in Paris - article translated from the French 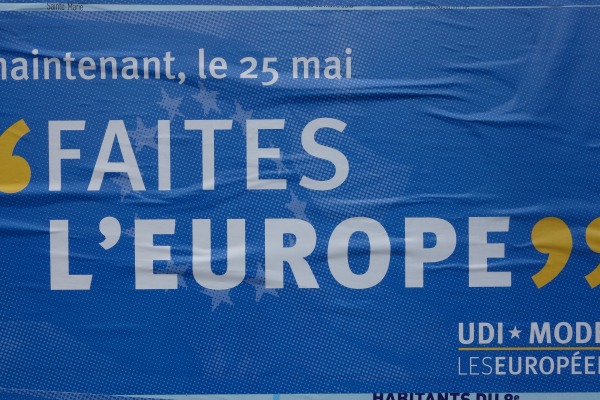 French centrists opened their campaign, by proclaiming their allegiance to Europe. This is a risky venture, as euroscepticism is on the rise. EURACTIV France reports.

The UDI-MoDem alliance, between the Union of Democrats and Independents and the Democratic Movement, quickly hung their “Faites L’Europe” (Make Europe) posters on boards left over from last week’s local elections. “Make Europe, not War?” The campaign clearly starts with a contentious tone. The centrist alliance, rebranded “the Europeans”, is prepared to cross swords.

“We are the only legitimate candidates who are clear on Europe. Therefore, we are the only real opposition to the National Front. The debate will take place between us and them”, claimed MEP Marielle de Sarnez.

The alliance’s objective is clear: whilst the National Front campaigns against Europe, the centre will mobilise all those who defend it.

The MEP also says that “one day, we would like to see a President of Europe elected by universal suffrage. This is the best way to embody Europe, instead of having a president of the Commission, president of the Council, plus the rotating European presidency system… It all waters down responsibility.”

The question of Europe is dividing the UMP, whose list for the European elections is still being hotly debated. Disagreements are rife. Last week, Henri Guaino, the former advisor to Nicholas Sarkozy, confirmed on French television that he would not vote for the UMP Ile-de-France list.

Guaino, who voted against the Maastricht Treaty, will not vote for pro-Europeans Alain Lamassoure, and MEP Rachida Dati. Guaino claimed that “I will not vote for the embodiment of a political line contrary to my beliefs and the interests of my country.” The UMP is a divided party.

Similar tendencies can be seen in the French Parti Socialiste. The new Prime Minister, Manuel Valls, is not known for his pro-European views.

The centrist alliance admits that there have been disappointments with Europe. “There is a demand to renew the European political landscape, and this is normal, motivation for Europe has come to a standstill. We must reintroduce politics in Europe: France has a vision to defend, but she does not defend it.”

When asked about European federalism, Marielle de Sarnez rejected this term: “It is a complicated word. It does not have the same meaning in France as it does elsewhere. Our proposal is simple: Europe must be made better, and work towards a Eurozone government. Of course the election of a president by universal suffrage would have a huge impact.”

Ambitions for the European Parliament

Marielle de Sarnez believes that the Belgian Guy Verhofstadt would make an “excellent president”. However, the charismatic centrist leader has little chance of being elected. The UDI and MoDem alliance plan to sit in the next legislation with the centrist group Alliance of Liberals and Democrats for Europe (ADLE), as the UDI currently sit with the centre-right European People’s Party (EPP).

“Our group will play a crucial arbitrary role” claim the French centrists, who aim to secure 12% of votes in the European elections. According to the latest surveys, they are ranked fourth behind the UMP, the National Front, and the socialists.

At a European level, estimates place the ALDE at 8.26% of votes. With 62 MEPs out of the total of 751, the group could indeed play an arbitrating role between the Socialists & Democrats, and the EPP.

However the merging of the European centre-right and the centre-left, orchestrated by Martin Schulz, has not done enough. The rise of extremist movements, which might set a new record for the amount of far-right and far-left parliamentarians in the European Parliamant, could push the large parties to form a grand left-right coalition. In this case, the centre would be hardly audible.

The French centre parties have been divided for a long time, and have to date mostly participated in centre-right governments.  The UDI, formerly led by Jean-Louis Borloo, tends to lean to the right, whereas the MoDem of François Bayrou backs a more independent political line. Europe is their common denominator, which pushed the two parties to unite in order to propose common candidate lists for the European elections.