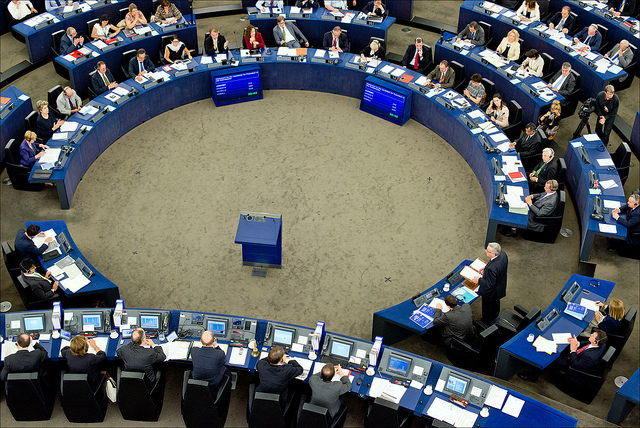 Only a minority of French MEPs voted in favour of Jean-Claude Juncker becoming President of the EU Commission. The EPP, S&D and ALDE coalition is already showing cracks. EURACTIV France reports.

French MEPs did not hand the new president of the EU Commission a blank cheque. A majority of the 74 French MEPs voted against him, or abstained. Only 20 MEPs from France’s right-wing UMP, and the seven centrist MEPs, voted in favour of Juncker. This goes against the trend in the European Parliament, where 422 out of 751 MEPs voted for the Luxemburg candidate.

MEPs from the far right, the far left, and the left chose to vote against or abstain. The French Socialist Party abstained, and by doing so, exposed the frailty of the coalition which brought Juncker to power.

“There were mixed feelings, so we proposed abstaining. We don’t want to put all our cards on the table. We must now make the most of the Transalpine dynamic to demand the reorientation of Europe,” said Pervenche Beres, head of the French Socialist delegation to the EU Parliament.

>> Read: MEPs flex their muscles ahead of Juncker approval vote

The Socialists’ choice can also be explained by national politics. They would struggle to explain to their electorate why they supported a right-wing candidate.

Juncker’s programme, which he presented to the Parliament on Tuesday (15 July), did not convince everyone.

“Jean-Claude Juncker focused on social themes. However, he failed to mention revising the European budget, which we deem important. He didn’t outline mechanisms for flexibility either. Finally, he mentioned an investment plan of €300 billion without saying where he would get this money,” said Guillaume Balas, a Socialist MEP from the Ile-de-France constituency. Balas often questions, and even defies, the political choices of his own party.

Of the three parties that formed a coalition to support Juncker’s rise to power, the Socialist MEPs ignored party guidelines. No one can deny the math. The coalition combines 479 MEPs, yet 57 chose not to vote for Juncker. This means that one in ten MEPs in the coalition voted against or abstained.

Both the EPP and ALDE claimed they voted for Juncker, although the Hungarian MEPs of the EPP did not.

“By voting for Mr Juncker today, we are consolidating European democracy and the fact that the voters got to decide who leads the European Commission,” ALDE group leader Guy Verhofstadt said, adding that “our continued support for Mr Juncker remains conditional on his ability and determination to return to the community method, to stop the slide to the intergovernmental arrangements of recent years and to work closely together with the European Parliament.”

Of the 57 MEPs that did not follow party guidelines, at least half were French (13) and Spanish (approximately a dozen) MEPs from Parliament’s Socialist and Democrats group.

Gianna Pitella, the new president of the S&D, criticised this analysis, and said that, “no one was in the ballot box”. Indeed, the election of the Commission president, like the election of the EU Parliament president, was done by secret ballot and there is no way of determining for sure who voted for or against Juncker.

Pitella said that members of his group will be “combative, loyal and demanding,” and stressed that the Hungarian right wing party, Fidesz, also voted against Juncker.

The weak cohesion of the coalition will not make Juncker’s job any easier, and his heated exchange with Marine Le Pen reminded everyone of the far right’s new influence within the assembly. Juncker drew applause by saying he was happy that she would not vote for him, as he didn’t want any approval from “those who exclude”.

The French Socialists’ stance in the European Parliament has put the French government in a delicate situation, as it claims to support Juncker’s political programme. This defiance in the Parliament and opposition across Europe will hinder France’s chances of getting the much sought-after economic affairs portfolio in the Commission.

In a press conference, Juncker said, “I have not promised a portfolio to anyone, contrary to what was understood by some French media,” making reference to Pierre Moscovici, French candidate for EU economic affairs commissioner.

He also repeated his call for more women candidates. He urged national governments to appoint more women in his new team of commissioners, and promised to reward those that do so with a big portfolio or vice-presidency. The members of the new Commission should be decided by the end of July.

In consultation with the President-elect, the Council then adopts the list of the other members of the Commission. These people are chosen on the basis of suggestions made by the governments. The Commission is subject, as a body, to a vote of approval of the European Parliament. The College of Commissioners is then formally appointed by the European Council acting by qualified majority.