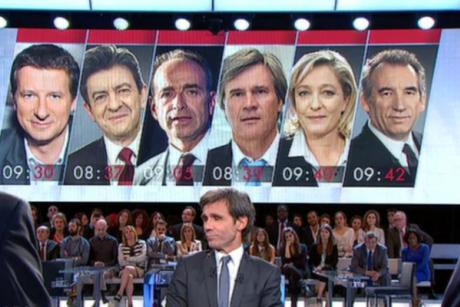 Party leaders focused on France instead of the EU during France’s final televised debate before the European elections (25 May). Immigration took centre stage. EURACTIV France reports.

The debate was televised on France 2, France’s public national television channel, just three days before the elections. As expected, it focused on France. The channel chose to feature Stéphane Le Foll, spokesperson for the French government, and François Bayrou, leader of the MoDem party, instead of Martin Schulz and Guy Verhofstadt, candidates to be EU Commission president.

A debate between two non-candidates

France 2 purposely chose two party leaders instead of candidates for the EU elections, which prevented much debate about Europe. Out of the six participants, only half were running in the upcoming elections (Jean-Luc Mélenchon for the Left Front, Yannick Jadot for the Greens and Marine Le Pen for the National Front).

French television already caused controversy earlier this month when it refused to air the debate between the two main candidates to be President of the European Commission, Martin Schulz and Jean-Claude Juncker.

“It was a strange decision not to choose EU election candidates for a debate on the EU elections,” said someone close to Martin Schulz.

Journalists asked four questions about Martin Schulz to Stéphane Le Foll. They asked him why “the Socialist Party wanted to Europeanise” the debate. By doing this, they hinted, like Jean-Luc Mélenchon did later in the debate, that “Europe was an idea of the left”.

Stéphane Le Foll rejected this, insisting that a social Europe and a European minimum wage were necessary to secure the future of Europe.

Immigration and Schengen, issues for France

The French right wanted to put France at the heart of the debate. They ensured the second half of the show revolve around the issue of immigration. The issue caused heated debate and some name-calling, especially between Jean-François Copé and Marine Le Pen.

François Bayrou from the centrist alliance struggled to stand out from the UMP, while the leader of the UMP, Jean-François Copé, emphasised that the UDI and the UMP believe the same thing. The UDI-Modem alliance is making constant efforts to move away from this comparison.

No lessons to be learnt from the vote, warns the Socialist Party

The Government’s spokesperson called on everyone to vote on Sunday, while at the same time, they are preparing their reaction to the results of Sunday’s election. “There are no lessons to be learnt from the European elections. In 2009, the Socialist Party had 16% (…) this did not stop it from winning the following presidential election.”

There was a small victory for Europe. Viewing numbers indicated that there is interest in France, as 2.2 million people tuned in to watch the debate, equal to 10.5% of public viewing numbers.

The Lisbon Treaty also strengthens the powers of the European Parliament, consolidating its role as co-legislator and giving it additional responsibility. It elects the president of the Commission on the basis of a proposal by the European Council taking into account the results of the European elections (Article 17.7) of the Treaty on European Union.