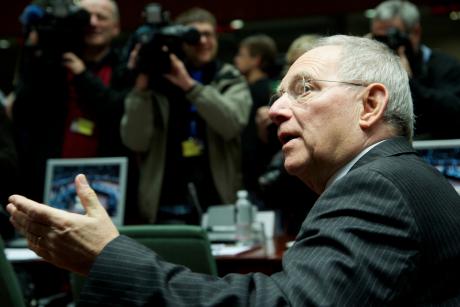 German Finance Minister Wolfgang Schäuble is alarmed by European election results in France and the victory of the right-wing populist Front National. [The Council of the European Union]

Wolfgang Schäuble expressed his concern over election results in France. One fourth of French voters opted for a “fascist and extremist” party, he said on Tuesday, also calling for stricter observation of eurozone budgetary policies. EURACTIV Germany reports.

“The European election is a clear signal”, said German Finance Minister Wolfgang Schäuble in a speech on Tuesday (27 May) at the Hertie School of Governance in Berlin. By choosing the National Front with Marine Le Pen, one fourth of voters in France not only opted for a “right-wing” but for a “fascist and extremist” party, he said.

Schäuble expressed his concern over possible effects on Europe: “Europe is not possible without France. Not only France, but all of us in Europe must ask ourselves what we can do better”.

Voter participation is something else that should be taken more seriously by politicians in Europe. “In Slovakia, for example, only around 13% went to the polls. That is shameful,” said Schäuble. But back-pedalling does not help fix the Eurosceptic trend, he emphasised.

Germany’s own Eurosceptic party the Alternative für Deutschland (AfD) was able to win 7% of the vote and 7 seats on Sunday (25 May), despite only being in existence for less than one year. Now, the AfD’s party leader Bernd Lucke is seeking out “moderate” allies in the European Parliament, decidedly ruling out cooperation with the Front National.

“We must make Europe better and not become Eurosceptic ourselves”, said Schäuble, who hails from Merkel’s centre-right Christian Democratic Union.

“The Commission president must be directly elected”

The finance minister criticised that the election campaigns continually broached the issue of whether one is for or against Europe. “As long as that is the key aspect, of course political content will not be looked at,” said Schäuble.

Further integration steps need to be taken to give the EU more democratic legitimacy, he said. “We need a directly elected Commission president,” said the finance minister.

By selecting top candidates to compete for the Commission presidency post, Schäuble said, an important first step has been made. “This step was successful – at least more successful than many heads of state and government expected in the advance. I am certain that it will go smoothly,” he explained.

The EU must promptly discuss the content of European policy planned for the next 5 years, said Schäuble. Only in this way can Euroscepticism be confronted and European integration be more convincingly continued. Tackling the crisis and job creation have priority.

“The jobs which have been lost will not come back in identical form. We need new, different jobs,” said the finance minister, referring to the digital market.

According to Schäuble, the Transatlantic Trade and Investment Partnership (TTIP) offers important initiatives for innovation and growth.

Negotiations between US and EU representatives over the planned TTIP agreement concluded their fifth round of talks in Arlington, Virginia on 23 May. But a study released in April showed German citizens do not trust EU negotiators to effectively promote their country’s economic interest and consumer standards.

Schäuble advocated for more flexibility from the EU side: For successful negotiations with the United States the EU must be ready “to change its living standards”, he said in Berlin on Tuesday.

In light of the economic crisis, Schäuble warned against an overly loose fiscal policy from the European Central Bank (ECB).

It is an unusual time for monetary policy at the moment, he said, but it should remain unusual, and come to an end soon. An overly high money supply will create “false incentives” and open the floodgates for “reckless investments”, the German finance minister warned.

The ECB reference rate currently lies at the historically low level of 0.25% and, according to observers, could be reduced to a minimum of 0.1%.

High liquidity could take the pressure off countries in the eurozone to implement reforms, said Schäuble. “We must continue our efforts; we must ensure that we do not hide behind monetary policy.”

In addition, Schäuble called for stricter observation of budgetary policies. Euro-area countries which do not comply with the requirements of the Stability and Growth Pact should be penalised by a newly created “budget commissioner”. Such a commissioner could be given an influential role similar to that of the existing Competition Commissioner in the field of competition law, Schäuble suggested. This “budget commissioner” could then prohibit bailouts for certain states, he said.

The German finance minister was certain that a change of the treaties would not be necessary to achieve this. Protocol No. 14 of the Lisbon Treaty, he said, allows the possibility to determine certain rules for the eurozone: this would still be far from interference in budgetary authority.States would still be able to decide for themselves how to reach their budgetary goals.