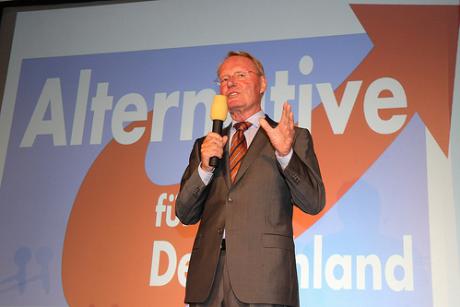 A candidate from the anti-euro Alternative for Germany (AfD) party sharply criticised French President Hollande, accusing the social democrat of “doing nothing” to turn the French economy around, as German competitiveness suffers under the “egalitarian” effects of euro zone bailout policies. EURACTIV Germany reports.

“Hollande is not doing anything”, criticised the AfD’s European election candidate at a political event on Monday (28 April) evening in Berlin.

In his view, France is the biggest problem in the eurozone. “Even a new prime minister who would try to play Gerhard Schröder would not be successful,” said Henkel.

But, Henkel remarked cynically, that is not even necessary. While the “south” continues to grow stronger under the euro bailout, the “north” is becoming weaker – and at some point the two will meet at the French level.

Henkel called this the “dramatic side effect” of the euro bailout policy. “They continue to save the euro at the expense of the Germans,” Henkel warned the attending party members and sympathisers.

A former head of the Federation of German Industries (BDI), Henkel was particularly tough on the German government. He accused the government of holding fast to the common currency, thereby jeopardising Germany’s economic strength.

Even with its social and energy policies, Berlin is doing Germans a disservice, Henkel argued. Retirement age at 63, the minimum wage, the energy transition (Energiewende) – all of these benefit the preservation of the euro, because they weaken Germany’s international competitiveness. Henkel believes these measures simply show that Angela Merkel and her government are completely following the euro bailout trend.

“The new fashion word in saving the euro is called ‘harmonisation’, which does not mean anything except egalitarianism,” said Henkel whose party campaigns for Germany to leave the euro.

Unsurprisingly, the AfD candidate is also not satisfied with the European Central Bank (ECB). Just as Ulrich van Suntum, who spoke before him –  the self-proclaimed “well-meaning” economist of the AfD – Henkel also castigated the discrepancy between the high financial share the Federal Republic contributes to saving the euro compared to its relatively low voting weight in the ECB.

“We are already in the trap. We are already being outvoted,” warned Henkel. “The fact that Malta or Cyprus have the same voting weight as the Germans is completely undemocratic.”

For clarification, Henkel draws a parallel to the German federal financial equalisation scheme (Länderfinanzausgleich). Under the German system, there are three net-donor regions – Bavaria, Hessen and Baden-Wurttemberg – which contribute financially to the remaining 13 net-receiving regions. The system serves to level out regional financial asymmetries across Germany.

For example, for every euro that Bavaria saves it must hand over 97 cents to Berlin. From the opposite perspective, 97 cents of every euro Berlin spends comes from a contributing region in Germany.

“The means that it does not pay off for the contributors, nor for the receivers, to save,” Henkel concluded, applying this logic to the European level. Germany and the other donors like Austria, the Netherlands and Finland have long since become victim of this “system of organised irresponsibility”, he said claiming it has doomed the entire economic area to ruin.

But the AfD politician’s criticism does not stop at the ECB, its traditional target. Not only is Henkel pessimistic about the German economy and the eurozone. He also senses danger for peace and stability as such in Europe due to the euro rescue policy.

“If one creates a European central state under a heading that idolises the euro, one will create centrifugal powers which can endanger peace in Europe,“ Henkel said, warning against developments similar to those which occurred 20 years ago in the former regime of the Soviet Union and Yugoslavia.

When the common ideological clamps of communism and socialism fell away, the AfD candidate said, the entire multinational entity broke apart and led to war. Henkel said he fears a similar situation is threatening the eurozone.

In his view, such a development is already emerging: Germany was the most-favoured nation in Europe before the crisis. But during her last visit to Greece in April, Angela Merkel had to be protected by thousands of police officers, Henkel recalled, and the “German-French relationship is also in a worse state than ever before, just because of the euro.”

In light of these conditions, Henkel said he has complete understanding for the United Kingdom, a country which is much-maligned in EU circles at the moment. Euroscepticism on the island is justified, he said.

At the same time, Henkel dreads a 2017 scenario in which the British could choose to leave the EU. “In that case, the EU will lose the last country with a shred of healthy common sense. Then we will be lost.”

0 responses to “Germany’s anti-euro AfD: ‘Hollande is doing nothing’”