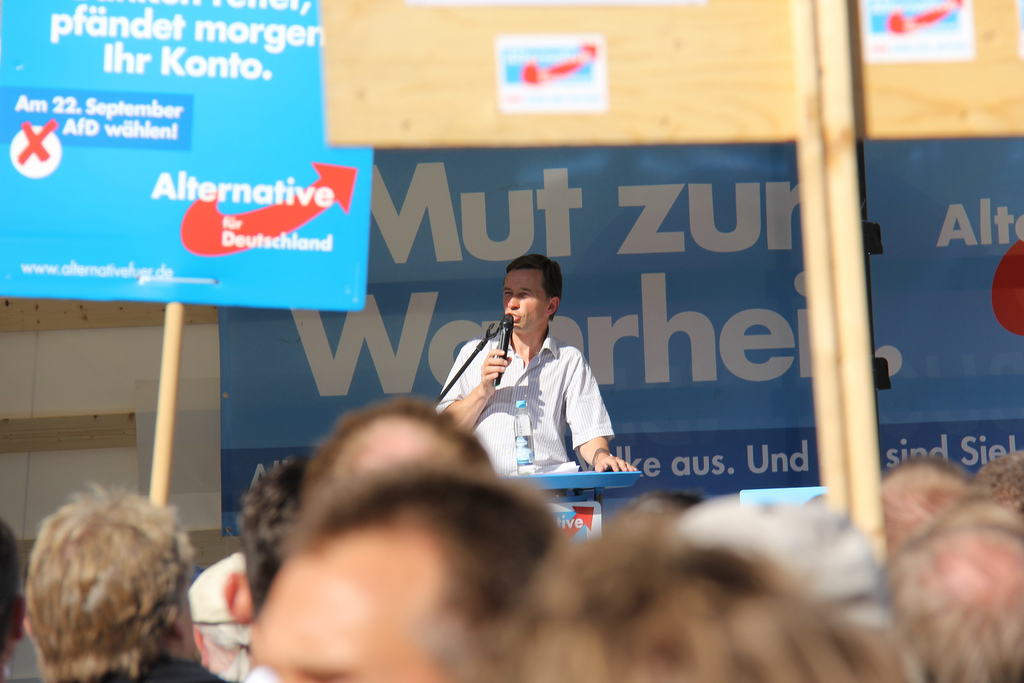 Germany's new Eurosceptic party launched its campaign for the European Parliament elections on Saturday (25 January) with an attack on EU federalism and a defence of national sovereignty, in an attempt to mend divisive infighting, EURACTIV Germany reports.

About 300 delegates from the Alternative for Germany (AfD) gathered at a party congress in the Bavarian town of Aschaffenburg to elect its candidates for the European vote in May, where fringe parties are expected to do well.

“We can only win if we stick together,” AfD leader Bernd Lucke said in his opening speech, comparing his party’s plight to that of David against Goliath.

The mainstream parties on the left and right were too “cowardly” to address Europe’s conflicts and problems, said the economics professor, who was elected lead candidate for the AfD’s European campaign.

The upcoming European elections could be a godsend for right-wing populist parties in Europe like the AfD, which aim for influence within the European Parliament. Other parties are either frantically trying to differentiate their positions from that of the radicals or else adopting Eurosceptic policy themselves.

Four months after the German Bundestag elections, the Eurosceptic party Alternative for Germany (AfD) has fallen behind in opinion polls.

The AfD’s popularity among voters dropped from 5% back to down to 4%, according to German news network stern-RTL. If there was a vote today, the AfD would again miss the 5% minimum required for representation in the German parliament, just as it did in September’s election, with only 4.7%.

But for the European elections, which take place on 25 May, the percentage is sufficient, as the European Parliament threshold for representation is only 3%.

Emboldened by the Bundestag failure, the AfD has been actively preparing for its European elections campaign. In early January, the former president of the Federation of German Industries (BDI), Hans-Olaf Henkel, announced he was joining the party.

“The AfD is the last liberal party in Germany”, said Henkel in a jab at the Free Democratic Party (FDP). Once a strong ally of Merkel’s Christian Democrats, the FDP failed to meet the 5% threshold in the last elections, losing its place in the German government.

Henkel himself recently chose to give up his seat on the supervisory boards of several major enterprises in Germany and Switzerland. While he refused to be the top candidate in the European elections, Henkel still said he wanted to play a prominent role in the AfD.

EU parliament seats would give the AfD a platform from which to campaign at home and draw support from other parties.

“From Brussels, we will aim and fight for our party to finally be represented in the German Bundestag,” said Henkel.

Regardless of where one places the AfD on the political spectrum, the party could profit from a low participation rate in the elections and become a magnet for dissatisfied voters from all sides.

And Germany is not the only European country where right-wing populism is on the rise. Countless events in Europe have focused on informing citizens in the hope of finding a miracle cure for the public’s disenchantment with politics. Analysts call for more participation in the May elections.

But demonising the AfD and Germany’s national conservatives as well as Eurosceptic parties in other countries is the wrong strategy, wrote Thomas Straubhaar, a Swiss economist and director of the Hamburg Institute of International Economics (HWWI).

Simply positioning oneself as the AfD’s main opponent, as the FDP did at its party convention one week ago, is less than convincing, Straubhaar wrote in the 22 January edition of Germany’s Welt newspaper.

Instead, he said parties should “aggressively and actively stress” the obvious advantages to Europe and the euro in the context of national solutions. This includes the four freedoms that have given Germany evident advantages, even if the conservative Christian Social Union (CSU) has a different opinion. The common euro currency is another development which, despite its problems, has brought significant benefits, Straubhaar argues.

Other than that, the Swiss analyst pointed out concerns with the wider economic policy situation. Since the financial crisis, the world has increasingly organised itself around two different poles – the United States and China. Europe can only stand strong if it speaks with a single voice, Straubhaar said.

“To claim that everything in Europe is good is ignorant because it contradicts empirical relevance”, Straubhaar admitted. But the facts clearly show that in almost every relationship, Europe is better off than the rest of the world, with the exception of North America, he wrote.

“Whatever is proven to work well in Europe, should be preserved and improved. Whenever deficits become apparent and require adjustments, a quick remedy should be created,” he said, citing the ongoing reform of the European banking sector.

Throwing the baby out with the bathwater, like the followers of renationalisation in Europe are demanding, is the wrong way, according to Straubhaar. Instead, he writes, much more must become Europeanised, so that as many things as possible can remain German.

>> Read more on the upcoming EU elections in our LinksDossier.