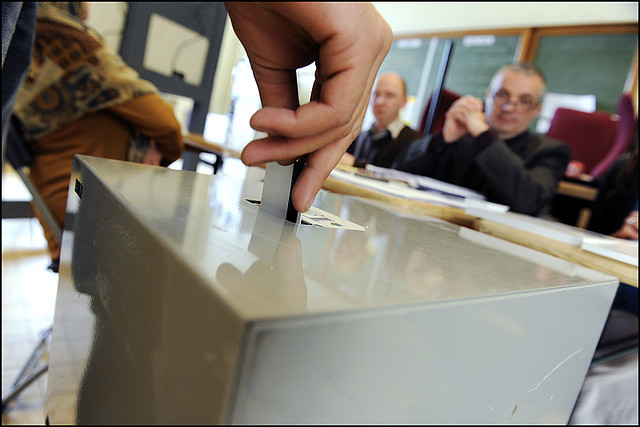 Voters take to the polls for the 2009 European elections. [European Parliament/Flickr]

The French Interior Ministry has released information on all candidates for the European elections, May 25. There are 193 lists competing for 74 French seats in the European Parliament. EURACTIV France reports.

There is no lack of European election candidates for French voters to choose from. A total of 193 lists will fight it out to win over the electorate in eight French constituencies, and secure their place among the 74 seats in the European Parliament reserved for French MEPs.

This is a substantial rise from the number of candidates in the 2009 European elections, when only 168 lists competed for the same amount of seats in the Parliament.

The Ile-de-France constituency, the area including Paris and its surroundings, counts the highest number of candidates with 31 lists. This is considerably more than the 2009 elections for which there were just 27 lists.

The hike in candidate numbers has not been restricted to Paris, and its affects can be seen across all French constituencies. The 22 lists in the Northwest constituency will compete for just ten parliamentary positions, compared to 18 lists in 2009. Candidates from the West also increased to 25 lists in 2014 compared to 20 lists in 2009.

The Southwest is the only constituency to have preserved a similar number of lists within metropolitan France. It increased from 24 lists in 2009 to 25 lists in 2014.

Out of the eight constituencies, only overseas departments have not experienced an increase in the number of candidate lists and presented 19 lists in both 2009 and 2014.

The proliferation of candidate lists from all political backgrounds does not always bring results.

Despite an increase in candidate numbers, by and large, only the main French parties manage to elect one or two candidates to the European Parliament in Strasbourg.

In 2009, the Ile-de-France constituency elected 13 MEPs, all from a major French party (the Greens, the UMP, the Socialist Party, the Liberals or the Left Front), while the remaining 22 lists were left on the sidelines.

The latest polls confirm that smaller parties will struggle again this year. According to a poll by OpinionWay carried out for Le Figaro from 23-25 April, the main French political parties will receive 85% of the vote in May.

In France, candidates for the European elections are many, especially due to few obstacles that prevent participating. Political parties just have to present 20 candidates (10 candidates and 10 extras) and respect the rules of parity. In other countries, like Germany, parties have to obtain a certain number of signatures to be a validated candidate. However, lists in France that receive less than 5% are automatically removed from the race, which limits the amount of small parties that enter the European Parliament.