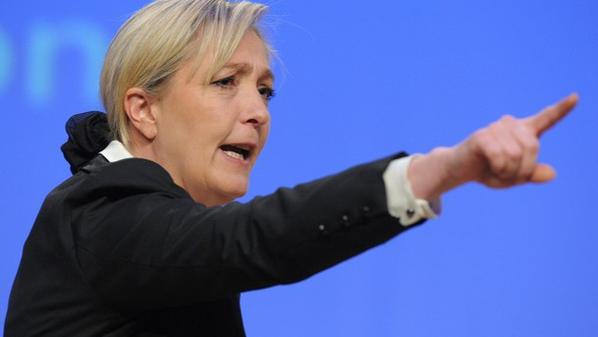 The Far-right National Front, which leads EU election polls in France and could send 16 MEPs to the European Parliament, is eyeing a vice-president role in the EU assembly. EURACTIV France reports.

The latest polls on the European elections forecast good results for France’s main far-right party. According to a poll by Ipsos-Steria for Le Monde newspaper, Marine Le Pen’s National Front could get 24% of the vote, compared to just 22% for the centre-right UMP, and 17.5% for the ruling Socialist Party.

Other parties are far behind: the alternative centrist alliance between the UDI and MoDem scored 8.5%, just ahead of the French Green Party (8%) and the Left Front (7%).

Always in the spotlight, Marine Le Pen, the President of the National Front, declared this weekend on French television that she wanted to be the vice-president of a new far-right group in the European Parliament.

“I will suggest a group with a vice-president similar to what exists in other European Parliament groups,” she said. “Considering the importance of France, especially because of the amount of French MEPs, I believe I could be the vice-president of this group.”

The outgoing MEP also declared that she wanted “to have a group, carry out amendments in plenary sessions and grant reports, all of which cannot be done when you are non-attached, especially if you are from the National Front.”

Current forecasts say that the National Front will win 16 seats in the European Parliament, out of 74 seats reserved for France. This would make it the biggest French party delegation in Strasbourg, and put Marine Le Pen in a strong position to form a far-right parliamentary group.

But other like-minded European parties have not yet stepped up to the plate.

Some parties have completely refused any alliance with the National Front, including the British eurosceptic party UKIP, and the German Alternatif für Deutschland party (AfD).

At the same time, the National Front has chosen to distance itself from other far-right European parties that it deems too extremist, such as the neo-Nazi Golden Dawn in Greece. And other parties are still on the fence, such as the Sweden Democrats.

One of the National Front’s main problems will be finding common ground between the seven nationalities required to form a group.

This leaves Marine Le Pen with a short list of likely allies, including the Freedom Party of Austria, the Vlaams Belang from Belgium, the Northern League from Italy, Order and justice from Lithuania or even the Slovak National Party. All those could ally with the National Front, which would ensure the minimum number of nationalities required to form a group.

Seven nationalities and a minimum of 25 MEPs are the two fundamental requirements to form a group according to the Parliament’s in-house rules.

22-25 May’s European elections are the first to be held under the Lisbon Treaty, which grants the European Parliament the power to vote on the president of the EU executive, the European Commission.

Five European parties have nominated a campaign figurehead, or 'Spitzenkandidat', that serve as their candidate to head the EU executive. Putting such 'faces' on the pan-European campaigns is hoped to counter the decreasing voters’ turnout. In the weeks before polls open on 22-25 May, the candidates face each other in a series of 'Presidential Debates'.

These debates are broadcasted by national and European media.

>> Follow our topic page for the EU Presidential Debates 2014 and in LinksDossier on the EU elections 2014.