Aline Robert for EURACTIV.fr in Paris - article translated from French 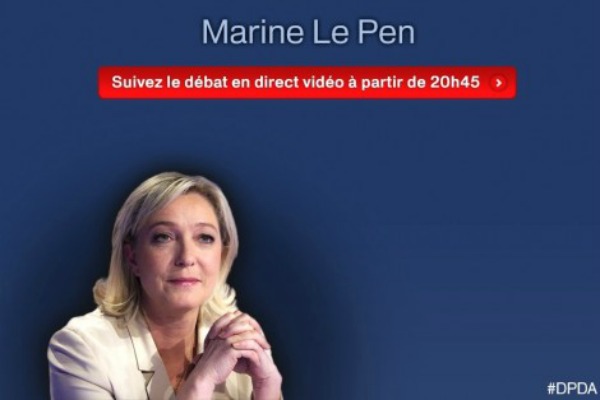 The leader of the Front National, Marine Le Pen, is under fire for her economic programme, and turning down a televised debate with Martin Schulz. EURACTIV France reports.

Marine Le Pen has turned down an invitation by France’s national television channel ‘France 2’ to a debate with Martin Schulz. The fact that France 2 bowed to her desires has triggered lively reactions. In particular from Martin Schulz himself, who accused her of leading a campaign that is “not European”.

“She refuses to debate with a European, because that means admitting that Europe exists!” the German candidate claimed.

He also insisted that Marine Le Pen had failed to rally together the European right wing movements. Subsequently, the scope of her discourse for the European elections was limited.

“In the goal to increase her party’s visibility, M. Le Pen tried to obtain from her European friends a mandate to present herself for the presidency of the Commission. She did not manage to do that. She now claims that her campaign is not European.”

Campaigns for the European elections began last week in France, and candidate lists from many parties were released, including for the centre, and the greens.

Marine Le Pen is benefitting from this platform to launch a campaign which hardly mentions Europe.

She stated on a French television programme that if she were to be elected as President of France in 2017, there would be a referendum on leaving the euro. “Every country would have its own national currency”, she assured, and there would be a “communal currency” with “fixed but adjustable exchange rates”.

Currency is at the heart of her programme: “I support saving money on immigration (…), on welfare fraud, on decentralisation, on metropolitan policy (…) but we cannot make reforms (…) while we refuse to devalue our currency.”

The National Front’s concise economic programme promotes what it refers to as “intelligent protectionism”, which includes imposing tariffs when faced with “disloyal international competition” but “not to tax imports of coffee as we do not produce this in France.”

Yet, France spends very little on tariffs on imported coffee.

Europe is the world’s number one roaster and trader of coffee. By definition, coffee imports are mostly bags of green coffee at 0% duty.

Even imports of roasted coffee beans are mostly tariff free.

“The list of countries that benefit from preferential duty of 0% due to bilateral agreements, regional agreements or a general preferential system, is very long” claims the European Commission.

Most coffee producing countries are exempt from customs, particularly those from Central America that export Arabica to France, and Colombia. Vietnamese and Indonesian coffee, the second and forth largest producers of coffee in the world respectively, are taxed at 2.60%. Roasted coffee beans from Brazil are taxed at 7.5%.

MEP Alain Lamassoure has criticised Marine le Pen for her absenteeism in the European Parliament, whilst the socialist MEP Yann Galut focused on more technical issues. Yann Galut, author of an anti-FN guidebook, criticised the National Front candidate for being neither left nor right. He claims that her economic programme contains “anything and everything”, and that the far-right can only offer France “the freedom of failure”.

According to the surveys, the far right and left will increase numbers in the European Parliament after the May 2014 European elections. The financial and then economic crisis engendered a lack of confidence across Europe, especially in Southern Europe and France, where the Front National has thrived.