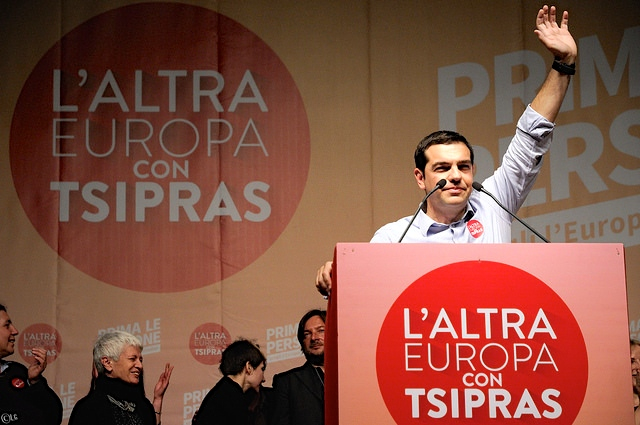 For the first time in the political history of Greece, a leftist party won the first position in the EU elections, beating the ruling center-right New Democracy, and putting into question its political legitimacy.

Opposition leader, and European Commission presidency candidate Alexis Tsipras, said that the current government has no political legitimacy to continue, and called for early general elections, a scenario fully ruled out by the Greek Prime Minister, Antonis Samaras.

The leftist Syriza got 26.6% of the vote, followed by ruling center-right New Democracy with 22.1%, granting 6 and 5 seats respectively, in the new EU Parliament.

Neo-Nazi Golden Dawn ensured the third position getting 9.4% of the vote (3 seats) while center-left Elia, a coalition of socialist movements led by the ruling Pan-Hellenic Socialist Movement (Pasok), is estimated to reach 8.1% (1-2 seats).

The newly established Potami party, which has not revealed which European political family it will be affiliated with, comes in fifth, with 6.6% (1 or 2 seats). Meanwhile, the Communist Party received 6.06% (1 or 2 seats) of the vote, and the Eurosceptic right-wing party Independent Greeks, 3.43% (1 seat).

The former junior coalition partner, Democratic Left, only received 1.21% of the vote, and will not be represented in the next European Parliament.

Another important characteristic of the EU elections in Greece was the increased participation of voters. The turnout late last night reached 58.22%, representing a slight increase, compared to the 2009 EU elections, when the rate was 52.54%.

The Greek PM, Antonis Samaras, commenting on the results of the EU election in the country, ruled out the scenario of holding early elections.

“With this vote Greek people sent a message to the government but simultaneously rejected the main opposition... I know what has to change and we will move on as quickly as possible”, noted Antonis Samaras.

“We passed the biggest test our country has ever been through in times of crisis, we are getting out of it and our economy is ready to recover […] we prevented the nightmare of going backwards”, he continued.

Opposition leader of the leftist Syriza and candidate for the presidency of the European Commission, Alexis Tsipras, called for early general elections.

“Today it’s a historical day for our people who clearly and decisively condemned Samaras’ government and the Memorandum. For the first time, the left got the first position with significant difference”, he said.

“European peoples are celebrating the defeat of Memoranda and austerity-driven policy”, he continued.

“Today’s results ruin the legitimacy of the government [...] and Samaras pretends not to understand it. With what moral and political legitimacy will he negotiate the debt of the country and impose new tough measures and a new Memorandum?”, he wondered.