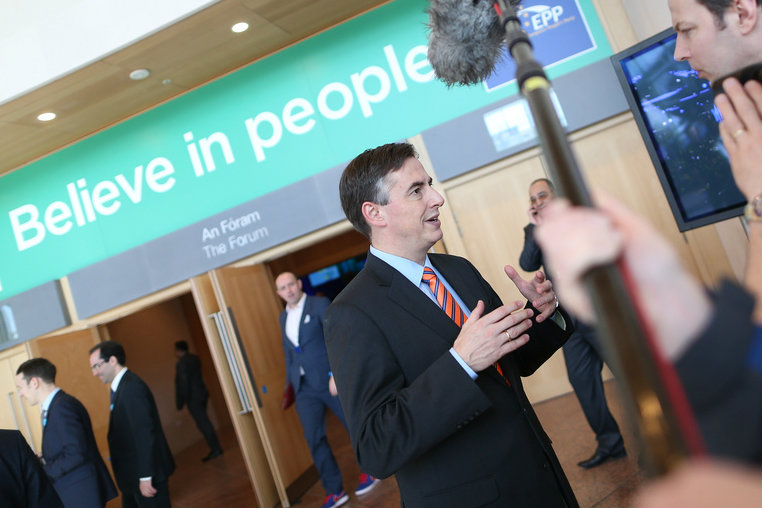 With European Parliament elections coming up in May, the fact that Germany’s ruling Christian Democratic Union (CDU) and its Bavarian sister the Christian Social Union (CSU) will run separate campaigns may stump some voters, who are used to seeing the two parties hand-in-hand during national elections.

“The CDU and CSU are sister parties, which would traditionally approach the Bundestag elections with a common election agenda”, explained David McAllister, the CDU’s top candidate for the EU elections.

“But in the European elections they traditionally proceed with different agendas,” he said.

Speaking to foreign correspondents in Berlin on Tuesday (15 April), the 43 year-old pointed out several differences between the CDU and the CSU in their Europe campaigns.

While there are “very many similarities” in their objectives, he said, the two conservative parties have several points of contention. The CSU, for example, wants to cut the number of Commissioners in half. This is not one of the CDU’s goals.

The CSU is also campaigning to introduce referenda in Germany over the country’s European policy – a goal the CDU clearly rejects, McAllister said.

The extent of freedom of movement and immigration policy are also sensitive issue between the sister parties. Here, the conservative CDU and CSU are actually in line with the Social Democratic Party (SPD), McAllister indicated, simply because of the grand coalition agreement. But the CDU’s support for freedom of movement is limited to qualified immigration.

“We also do not want immigration that involves exploiting social services,” McAllister said, but the CDU’s demands differ significantly compared to more radical plans from the CSU.

A CSU of varying ‘personalities’

“The CSU is a very diverse party with many different personality figures”, explained McAllister in Berlin, hinting at the CSU’s deputy party leader Peter Gauweiler, who has been known for disgruntled Euroscepticism.  “But after all, Gauweiler is only one of the CSU’s representatives,” the top candidate said.

In fact, the CSU’s own top candidate for the EU elections, Markus Ferber, belongs to the more pro-European side within the Bavarian party.

But McAllister also indicated that the CDU and CSU do have common expectations for the next Commission presidency, which will have to come up with a clear political work programme for the next five years.

The conservative parties’ biggest priorities are the stabilisation of the euro currency, completion of the banking union and the internal market, concluding free trade agreements, strengthening common security and defence policy and a common energy policy.

“We need a strong Europe and not a bureaucracy that strays to dealing with small-small things,” McAllister said.

No EU accessions in the next five years

The CDU’s top candidate also elaborated on his approach to EU enlargement. In his view, there should be no more EU accessions over the next five years. The EU must prioritise the solidification, deepening and strengthening of the latest accession cases, McAllister explained.

That applies particularly to Turkey, McAllister indicated. With its domestic policy situation, Turkey is constantly moving further away from EU standards.

Turkish accession would “overwhelm the EU in many respects”, he said. In that sense, full membership is inconceivable, McAllister said, even if the country is an important NATO and economic partner.

In McAllister’s opinion, Europe has not yet overcome the crisis. The EU must “be made absolutely fit for the future”, he said. For this reason, the EU does not have the strength to accept any new member states, the CDU politician explained. The Romanian and Bulgarian accessions still involve enough unique challenges for the time being.

Since 1949, Germany’s Christian Democratic Union (CDU) and its Bavarian sister party the Christian Social Union (CSU) have joined forces in a parliamentary group, renewing their alliance after each electoral term.

Parliamentary groups in the German Bundestag are a voluntary association of MPs from one or more parties who have similar goals and agree not to compete against each another in regional elections.

Currently headed by Horst Seehofer, the CSU’s following is almost exclusively in the Free State of Bavaria, where the party has consistently been active in the government since 1957. Chancellor Merkel’s slightly less conservative CDU represents centre-right interests in Germany’s remaining 15 “Länder”. Together, the two parties are often referred to as “the Union”.

After last year’s election results, the CDU/CSU alliance won 42% of the votes, a level not seen since 1990. As a result, the centre-right CDU/CSU parliamentary group currently holds the highest number of seats in the Bundestag with 311 MPs, 255 of whom belong to the CDU party and 56 to the Bavarian CSU.