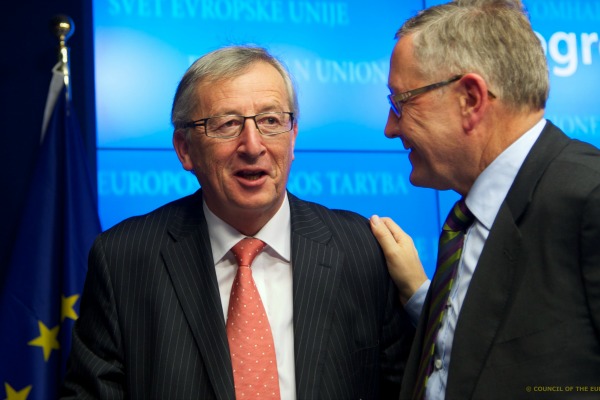 “All the signs are green for him to be the candidate for the EPP”, an official close to Juncker told the Financial Times (FT) regarding the former Luxembourg prime minister’s position on the top of the party’s candidate list in the upcoming EU elections.

As one of the highest-ranking conservative politicians in the EU, Merkel’s support is crucial for the appointment of any EPP frontrunner.

Already in early January, Luxembourg’s former prime minister and long-time head of the Eurogroup, Jean-Claude Juncker, expressed his willingness to accept the position of top candidate.

The EPP is set to officially select their lead candidate at a party convention in Dublin on 6 March, which is also likely to entail a nomination for the Commission presidency following the elections.

“Now we have to wait for the selection process to be completed, but I can assure you that Juncker is ready for the job and is ready to lead the campaign for the Commission presidency,” an official told the FT.

Until now, media reports indicated that it was doubtful that Juncker would gain the crucial support needed from Merkel, who leads Germany’s ruling conservatives, the Christian Democratic Party (CDU), a member of the EPP European Parliament group.

The news may prove a gamechanger for Juncker. According to the FT, “Merkel phoned him directly to assure him of her support”.

The account was confirmed by reports in the German press on Sunday (2 February): “The decision for Juncker has been made. Chancellor Merkel also wants Juncker to be top candidate in the European elections and supports his candidacy”, the German newspaper Welt am Sonntag said, citing consistent accounts from “informed circles in Brussels and Berlin that are familiar with the deliberations”.

As a result, Juncker is well on his way to becoming the EPP’s lead candidate but, even so, there is still a chance that the Party of European Socialists (PES) could emerge as the strongest party in this year’s European Parliament elections. In that case, Juncker could miss his chance of a top job in Brussels.

If the Socialists win in May, London intends to present Irish Taoiseach (Prime Minister) Enda Kenny as an alternative to Juncker, Welt am Sonntag reported, citing high level EU sources.

Furthermore, there is a good chance that Juncker could become the successor of European Council President Herman Van Rompuy, the German newspaper reported. “This would open up room for manoeuvre for Mr. Juncker in the coming years and is less stressful than the office of Commission president.”

Candidacy not likely for Lagarde

Speaking over the weekend, German EU Energy Commissioner Günther Oettinger voiced his opposition to Lagarde’s candidacy in an interview for Germany’s “Focus” magazine.

“Mrs. Lagarde has an outstanding position [at the IMF]. We can be happy that a European sits at the head of the IMF. I think, she is helping us the most from there,” said Oettinger, leaving his own post-election future to be determined.

On 22-25 May, EU citizens will cast their ballots to elect 751 members of the European Parliament.

But MEPs will not be the only ones to perform a game of musical chairs: 2014 will also bring about change in many of the top positions in the EU executive.