Merkel says Juncker can be approved with ‘qualified majority’ 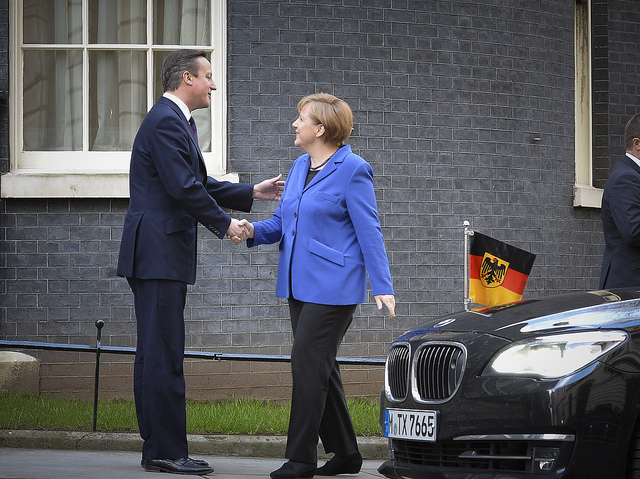 German Chancellor Angela Merkel said on Monday (2 June) she was pressing fellow EU leaders to back Jean-Claude Juncker for the post of European Commission president, but also noted it could be pushed through without the backing of all.

Speaking at a news conference with the visiting prime minister of Georgia, Merkel stressed that Juncker, former prime minister of Luxembourg, could be approved in the European Council, which groups all 28 EU leaders, with a “qualified majority”.

Under rules in place until November this year, opponents of Juncker, led by Britain’s David Cameron, would need the support of countries representing 38 percent of the population of the European Union to block him.

No one expects it to come to a vote. But Merkel’s mention of the procedure could be interpreted as a subtle warning to those who oppose Juncker, the declared candidate of the European People’s Party (EPP), the largest grouping in the new European Parliament.

“In all the talks that I hold, I am working to ensure Jean-Claude Juncker gets the necessary majority in the Council, in order to become the next president of the European Commisssion,” Merkel said.

“I am also working to ensure that this decision, even if it is controversial – and you know, the required majority, it is a qualified majority – is made in the European spirit. And by European spirit, I mean that we always work to achieve the highest level of consensus.”

Merkel, whose Christian Democrats (CDU) are members of the EPP, raised doubts about her own commitment to Juncker last week by suggesting at a news conference in Brussels that the top Commission job could be done by others.

Her lukewarm comments sparked a backlash in the German media and from her coalition partner, the Social Democrats (SPD), who accused her of succumbing to British blackmail. She has since stepped up her verbal support for Juncker.

“The chancellor cannot appear to buckle under the weight of British pressure, but for domestic reasons David Cameron needs to make his opposition to ‘unacceptable’ candidates as clear as possible,” said Alex White, an analyst at J.P. Morgan in a note on Monday. “This will make compromise difficult”.

Merkel is due to travel to Stockholm next week for a meeting with Cameron and two other Juncker sceptics, Swedish Prime Minister Fredrik Reinfeldt and Dutch Prime Minister Mark Rutte.

Italian leader Matteo Renzi and Hungary’s Viktor Orban are also cool on Juncker. At the weekend, Renzi said the former chairman of the euro zone group of finance ministers was just one of several candidates for the Commission job.

European leaders have given themselves until late June to reach a deal. Their eventual nominee must win majority support in the European Parliament to be appointed.