National Front ‘not worried’ about finding anti-EU allies in Parliament 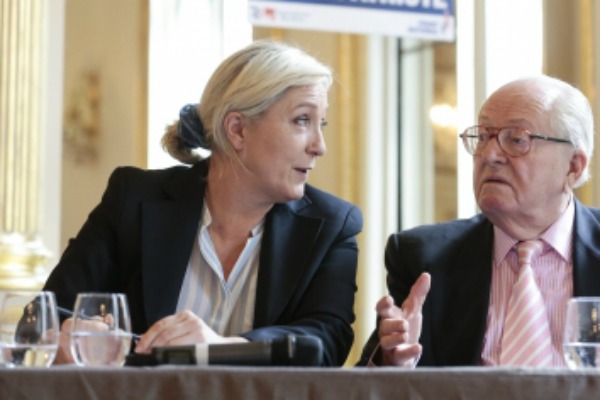 Marine Le Pen next to her father. Paris, April 22. [euractiv.fr]

Marine Le Pen is not worried about forming a political group in the European Parliament after the EU elections, saying she expects to find unexpected allies also on the far-left, with whom she shares a common aversion for Europe. EURACTIV France reports.

Marine Le Pen, leader of France’s far-right National Front party, launched her campaign for the European elections on 22 April in Paris. Besieged by Femen activists and cameras, the result was a mix of visually shocking images, and provoking declarations.

“Supporting the EU is working against France,” she said. “The [centre-right] UMP and Socialist Party have always backed the European project,” and “directives destroy the lives of our people,” Len Pen also stated.

Yet when it came to actual policies, the party, which current polls put at 22%, remained quiet, and presented no political programme, or plans for future parliamentary alliances at European level.

“For us, the campaign is national. We should not have to debate with other countries,” claimed Marine Le Pen. This is a substantial turnaround from her initial objectives. Having failed to make allies on a European level, the National Front is now in serious danger of being isolated in the European Parliament.

The National Front did not announce any alliances, which are essential to gaining influence in the European Parliament. The requirements for forming a political group are a minimum of 25 MEPs, from at least seven different countries.

UKIP and the Alternative for Germany (AfD) have already refused any alliance with the French far-right.

“I am not worried about forming a future political group in the European Parliament, and we will reveal our choice of partners at a later stage,” Marine Le Pen declared.

Apart from the Dutch Party for Freedom, led by populist Geert Wilders and the Freedom Party of Austria, FPÖ, no other European parties have yet announced plans to work with Le Pen.

Both parties have been accused of racist remarks since the European election campaign began.

The Party for Freedom fell in the polls, after claiming that it wants less Moroccans in the Netherlands.

Andreas Mölzer, leader of FPÖ, had to pull out of the European elections on 8 April following a series of racist remarks, including a comparison of the EU to Hitler’s Third Reich, and racist comments about David Alaba, an Austrian national team and Bayern Munich football player, born to a Nigerian father and Filipino mother.

The National Front has mentioned other parties, like the Brothers of Italy and Northern League, the Lithuanian Order and Justice party, and the Sweden Democrats. According to a spokesperson for the Swedish party, they have “established contact, but no decisions will be made before the European elections.”

French MEP Nicolas Dupont-Aignan and his party Arise the Republic have had more success with right-wing parties across Europe. Nigel Farage, leader of UKIP, refuses to work with the National Front, which he accuses of anti-Semitism, but has maintained relations with Nicolas Dupont-Aignan and his party. Coincidentally, Nigel Farage’s parliamentary assistant is a candidate for Arise, in the European elections.

“Nigel Farage’s remarks about us are disgraceful, especially given that Nicolas Dupont-Aignan accepted Gilles Bourdouleix into his party, someone who believes that Hitler did not kill enough people of the traveling community,” claimed Marine Le Pen.

Clearly, the National Front’s relations with other far-right European parties leave much to be desired.

Preventing the EU from progressing

When EURACTIV asked Marine Le Pen what her MEPs would offer in terms of economic policy and treaty changes, the answer was vague. However, she claimed that their goal was to “prevent the EU from advancing” and that “elected MEPs will contribute in limiting the regulations which constrain the French economy.”

She also claimed that the far-right will likely be assisted in their goal by “far-left MEPs, even though such an idea is strongly unpleasant to them.” In her view, French MEPs are elected to “defend France” at the European level, a sensitivity shared with the far-left which campaigns around similar anti-European topics.

“The European Union does more harm than good to planet earth. By consuming goods produced abroad, it drives up imports from countries like China,” she said. Although Marine Le Pen said that her party’s environmental policies would be specified at a later date, this suggests that they will focus on raising tariffs.

The issue of custom duties is central to the National Front. Two weeks ago, Le Pen argued that duties on coffee should be reduced, because coffee is not produced in Europe. However, duties on coffee are already very low.

Increasing custom duties would have negative repercussions. Countries that are submitted to higher duties would retaliate, causing a reduction in EU exports. Considering Europe’s present trade surplus, imposing high tariffs would cost the EU’s economy more, in the long-term.

The next European elections will take place between 22 and 25 May 2014. They will be the first to take place since the Lisbon Treaty, which increased the power of the European Parliament in the process of nominating the resident of the European Commission.

25 May: European elections in France