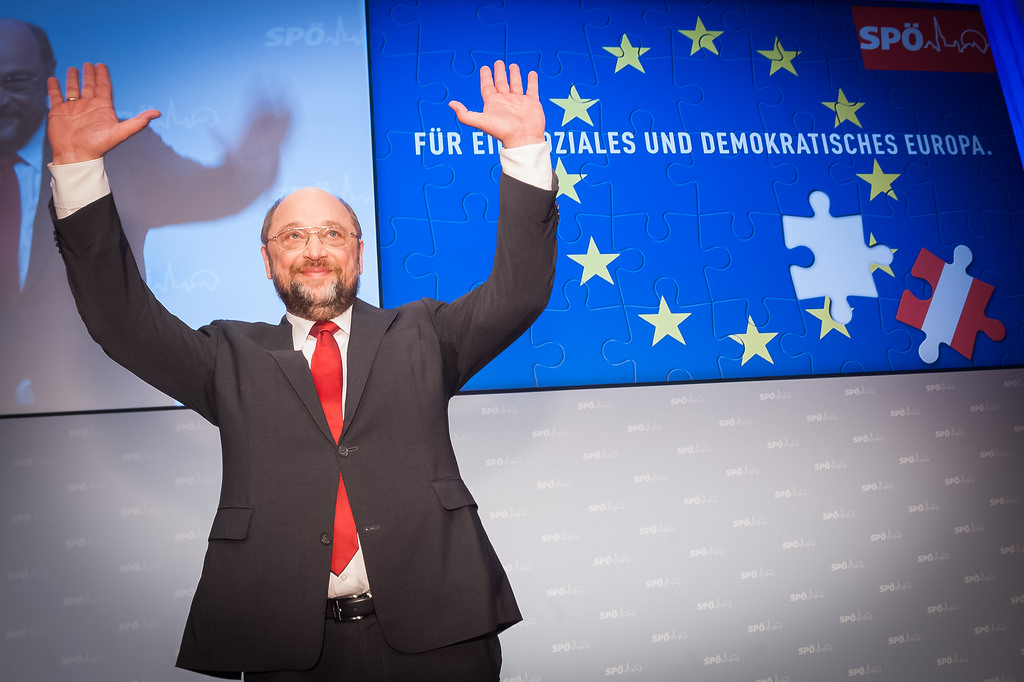 Less than four weeks before the European elections, Germany’s Wahl-O-Mat vote matching tool is online: whether or not it can mobilise voters remains to be seen, while Germany’s top candidates already seem to like this year’s edition. EURACTIV Germany reports.

On Monday (28 April), German top candidates put themselves to the test, trying out the Wahl-O-Mat in Berlin during the debut of the 2014 edition.

“Absolutely!”, answered European Parliament President Martin Schulz, not hesitating over his position on the introduction of a financial transaction tax. The Social Democratic Party (SPD) politician is the party’s top candidate in the 2014 European elections.

“Should the president of the European Commission be directly elected by the citizens?”, was another question posed by the Wahl-O-Mat.

“Yes, that is written in our election agenda”, responded top candidate from the Christian Democratic Union (CDU) David McAllister, confidently. But asked for a position on limiting manager salaries the centre-right candidate was less certain. “Good question”, he responded.

“The European Union should be understood as a community of Christian values,” or “passport controls should be reintroduced along German borders.” These are two of the 38 positions included in Germany’s latest Wahl-O-Mat tool for the 2014 European elections, 20 of which are questions also posed to parties in 14 EU member states.

Released on Monday (28 April) evening, the tool presents users with statements to which a yes, no or neutral response can be submitted. The results serve as a guide for voters to find out which party or parties most accurately represent their interests.

To do this, individual responses are compared to those submitted by all 25 of the parties up for election in May. The program’s ability to represent political preferences in numbers makes them easier to measure.

Germany’s Wahl-O-Mat is organised by Germany’s Federal Agency for Civic Education (bpb) and has existed since 2002. Like others of its kind throughout Europe, the project is an educational tool intended to motivate voters to head to the polls on 25 May.

“The Wahl-O-Mat is an activation tool”, explained the spokesman for the project’s development team. Whoever uses the instrument also influences those around them, he said, as 70% of users tend to compare their own results with those of their relatives, friends or colleagues.

In 2012, the network VoteMatch EU took on the project of integrating existing European election tools like the Wahl-O-Mat by extending the comparison to include party platforms in 14 EU countries. This project hopes to encourage voters to think about issues beyond their own borders, exposing them to party positions in the collaborating member states.

“The higher voter participation is, the lower the risk that Nazis will get into the European Parliament,” Schulz said.

For this reason, all the top candidates are seeking to promote the new online tool.

“It was fun to test my own election agenda”, McAllister pointed out, presenting his own results: 98% of the CDU top candidate’s answers coincide with those submitted by his party.

The second closest correlation according to McAllister’s scores is with the CDU’s Bavarian sister the Christian Social Union (CSU) at 81.4%, followed by their former coalition partner the liberal Free Democratic Party (FDP) with 70.9%.

McAllister only shared 62.8% with his party’s current coalition partner the Social Democratic Party (SPD), which is backing Schulz for the Commission presidency. The CDU politician’s positions only fit those of the Green party in 48.8% of his responses.

Other top candidates who attended the event in Berlin included Markus Ferber from the CSU, and Rebecca Harms from the Green Party.

Those who are not satisfied with party recommendations within Germany alone can compare their personal positions with parties from 14 other EU member states starting on Tuesday (29 April). The Europe-wide element adds to the “game-like” character of the online tool, said the Wahl-O-Mat team.

The EU has 24 official languages, whilst French, German and English are the working languages of the European institutions.