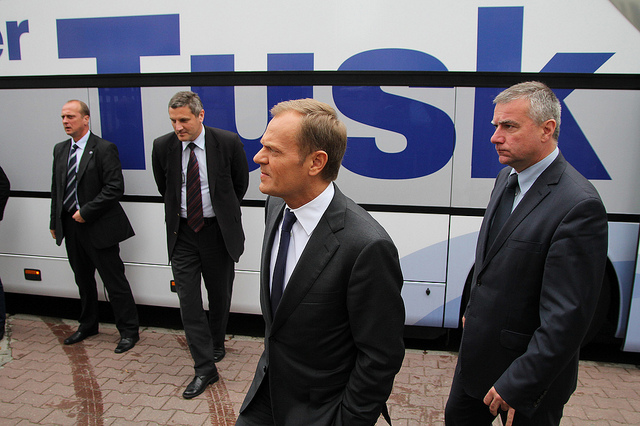 EU leaders elected Polish Prime Minister Donald Tusk on 30 August to be the next President of the European Council.  EURACTIV Poland recounts his long journey from a historian and a private entrepreneur in Communist Poland, to the founder of the Civic Platform party, and one of the leaders of the European Union.

Donald Tusk was elected the successor to Herman Van Rompuy, as the President of the European Council. It was a proud moment for the former student dissident.

Beginnings of a political career

Donald Tusk is a graduate of University of Gda?sk, and holds a master’s degree in history. After graduation, he continued his work with “Solidarity” movement, while working as a labourer and a journalist.

After the transition to democracy, Tusk established the Liberal-Democratic Congress (Kongres Liberalno-Demokratyczny), a liberal political party. He was an MP until 1993. After the failure of the LDC in the 1993 elections, the party joined the Freedom Union (Unia Wolno?ci), with Tusk becoming deputy chairman of FU.

In 2001, Tusk left the FU when he failed to become elected as the party’s chairman. Together with Maciej P?a?y?ski and Andrzej Olechowski, they founded a new party – the Civic Platform (Platforma Obywatelska). It was a more centre-right party than Tusk’s previous ones, fitting comfortably in the European People’s Party political family.

Over the next few years, Tusk centralised the party around himself. In the 2007 parliamentary elections, he was the sole party leader and his electoral successes only strengthened him. Two years of Kaczy?skis’ rule [the twin brothers Lech and Jaros?aw were respectively President and Prime Minister in 2006-2007] allowed him to present the Civic Platform as the anti-Kaczy?ski party, being modern, whereas Kaczy?ski’s Law and Justice is conservative, and pro-European, in contrast to the Euroscepticism of Law and Justice.

Despite some unwelcome decisions and criticism for lacking a bold vision for Poland’s future, a fear of Kaczy?ski’s return to power was enough to keep the Civic Platform in power. Now, as his support is dwindling, Tusk has made his latest hat trick – he has become the first person from Central and Eastern Europe to become the President of the European Council.

Polish media have welcomed the result of the Saturday’s summit with joy and pride. The commentaries stress the coincidence of the Tusk’s election with the 25th anniversary of the fall of Communism in Poland, and the 10th anniversary of the Polish accession to the EU. While it is acknowledged that the President’s position is a prestigious one, with a lack of executive power, commentators still hope that Tusk will manage to steer Europe towards calmer waters and to remember the energy of the early Civic Platform campaigns.

Becoming the President of the European Council is a proud moment for Tusk himself, but his departure from the Polish scene will leave a void. Over the last ten years, Tusk has managed to become the undisputed leader of the Civic Platform, without any serious challengers to the role of the party leader. The last person to challenge Tusk, Grzegorz Schetyna, a former Minister of Interior, failed in his bid to become the second power in Civic Platform, and is currently out of favour. He has not quit the Civic Platform though, and is still popular among rank-and-file.

The question everyone in Poland is asking now is whether Civic Platform will manage to win the upcoming elections despite Tusk’s departure. The next poll will be held on 16 November 2014, so Tusk will still be able to lead his party during the election campaign. The true test will come next year, during the parliamentary and presidential elections.

While the incumbent president, Bronis?aw Komorowski, seems certain of victory, the parliamentary elections may prove more difficult for the ruling party.

Commentators and experts on the Polish political scene are divided in their views. Some believe that the departure of Tusk will provide a new beginning for the Civic Platform which polls currently place below Law and Justice: 26% and 31%, respectively.  A need to reorganise the top of the party structure may bring new ideas and revive the energy with which party used to campaign at its beginning, in 2005 and 2007.

Politicians from the junior coalition partner note that only one fifth of the public trusts Tusk. A new prime minister will be able to start with a blank slate – and public opinion will be easier on them.

The other side of the argument is less optimistic for Civic Platform. According to some experts, Civic Platform will be unable to find its balance without Tusk and will destroy itself through infighting.

There are already the first signs of tensions – supporters of Schetyna has already called for the elections of a new party leader.  According to party regulations, the party chairman is chosen by all members of the party. Schetyna is willing to bid his popularity against anyone named by Tusk, though supporters of the Prime Minister want to wait with the internal elections and hold them only after national one, as not to divide the party before the electoral campaign.

Both sides though are certain that the current Speaker of Sejm (the lower house of the Polish Parliament) Ewa Kopacz will replace Tusk as the Prime Minister. She enjoys support and trust of both Tusk and Komorowski, so nothing should get in her way in leading Polish government at least until the elections next year – and maybe even further than that.

2 responses to “Profile: Donald Tusk’s journey to the top”