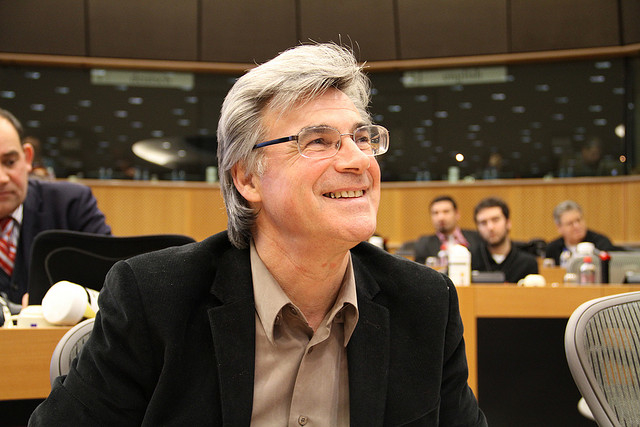 Patrick Le Hyaric, candidate for the Left Front, combines his parliamentary work with running a newspaper. The first in a series of portraits of French election candidates, by EURACTIV France.

An MEP since 2009, Patrick Le Hyaric is a special case. He is the only MEP that is also the director of a newspaper, the left-wing l’Humanité, which he has been managing since 2000.

Preventing the collapse of a newspaper that was founded in 1904 by Jean Jaurès, a French Socialist leader in early 20th century, has not been an easy task. Le Hyaric manages a busy schedule, evenly divided between his l‘Humanité‘s demands, and his parliamentary duties.

“At the paper, I do not speak of my activity in the European Parliament…. they do a good enough job here” the MEP and vice-president of the far-left European United Left-Nordic Green Left told EURACTIV France.

“I fought to bring the paper back to equilibrium. After putting in place a subscription, supplements and press aid, we have succeeded. However, it is not easy to get everything and everybody moving,” he said.

Patrick Le Hyaric comes from a communist background in Brittany.

His father was a communist activist in Lignol, a village of 9000 inhabitants which had three Communist Party cells at the time. “It was communism based on the values of justice and social Catholicism. Brittany turned to Communism because it was poor and underpopulated. People were forced to work closely together to survive, they were clog makers, worked in slate mines and also helped each other out on the fields… and they spoke together from dawn until dusk. They were communist in a “sharing” kind of way.”

Le Hyaric initially wanted to work on the family farm. He attended an agricultural secondary school and tried to stay close to his parents, but he was quickly drawn to activism and his brother took over the farm.

He began his political career as a local councilor for Lorient, then joined the Communist Party’s National Agriculture Committee and gradually worked his way up. “I wanted to stay in Brittany… but in the end, I was promised an 18 month position with André Lajoinie. I worked with him for 17 years.”

In this position, he worked on agriculture issues, the EU’s Common Agriculture Policy, and globalisation, which became his main focus, whilst dealing with the Communist Party’s parliamentary relations and assisting Lajoinie in his work as member of the French National Assembly.

Le Hyaric promises that, if re-elected on 25 May, he will dedicate more time to the European Parliament in order to push through necessary reforms.

“I have lots of respect for other MEPs with whom I have worked, like the socialist MEPs, who are socio-democratic. Something that the President of France is not.”

However, the Europe that he dreams of is still a distant reality. “We must entrust more legislative initiative powers to the European Parliament, and the President of the Commission should be elected by universal suffrage. We are moving towards this system, but we must compromise to reach it. We must also include other European institutions: the European Economic and Social Committee and the Committee of the Regions have a great deal to contribute.”

Progressive alliances in the European Parliament

In the short-term, Le Hyaric has chosen to be pragmatic in his parliamentary work, distancing himself from his political ally Jean-Luc Mélenchon at the heart of the Left Front, which brings together the Communist Party and the Left Party for the European elections.

“If Alexis Tsipras does not get a majority” he says with a smile, “and that in the second or third round we have to choose between Schulz and Bové, we will make that choice. But we cannot just do any old thing. We could negotiate a common action programme and make progressive alliances. It works in the European Parliament.”

Le Hyaric promotes a political programme which advocates restricting the EU’s tough economic policies. As the Germans are likely to refuse any reforms of the ECB, Le Hyaric backs establishing a public fund which can buy the debts of member states, or intervene in cases of emergency. For example, he would prefer to see a common fund deal with Alstom’s debt than seeing the company go under.

“I am a Jauressien, and Jaurès says that one must find the correct path, always, and commit to it. But today Europe is going down the path of regression. This is clearly not the way forward,” concluded the candidate.

Read more in our LinksDossier.