Reinfeldt steps down as Swedes vote for centre-left government 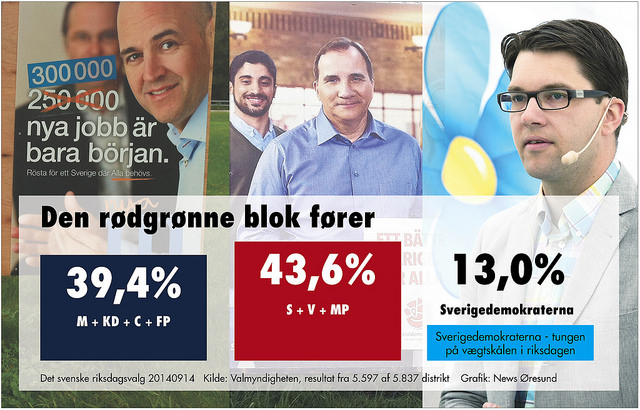 Sweden’s centre-left parties won big gains in Sunday’s (14 September) general elections. However, despite winning more than 30% of the votes, Stefan Löfven, the Social Democrats’ leader and the country’s next prime minister, will form a minority government in a hung Parliament after the far-right Sweden Democrats became the country’s third-biggest party.

The Social Democrats, together with the Left Party and the Environment Party, received around 45% of the votes, while the centre-right coalition, The Alliance, won around 38%. Swedish Prime Minister Fredrik Reinfeldt’s conservative party, Moderaterna, at 23%, lost more than 7% of the vote since the last elections.

Meanwhile, the anti-immigration, far-right party, the Sweden Democrats doubled its mandate, to 13%.  Voter turnout increased, at an estimated 86%.

Reinfeldt, who has been in power since 2006, acknowledged his party’s poor showing, and announced that he’ll be stepping down both as prime minister and as party leader.

57-year-old Stefan Löfven, Sweden’s next prime minister , has said his government won’t be relying on the votes from the Sweden Democrats. This means he will either suffer many defeats in Parliament, or needs to form a grand coalition like in Germany, working together with centre-right parties, political commentators and experts said.

“We need to invest in the unemployed, in education and in welfare. Now we need solidarity,” he added.

Löfven has been characterised as “a classic Swedish Social Democrat”. He was an orphan as a child, but was later adopted by a foster family. Despite not having an education and having only worked as a welder, Löfven rose to the top, first by becoming the chair of the Swedish Metal Workers’ Union and later as party leader for the workers’ favorite party, the Social Democrats, in 2010.

In the election campaign, Löfven promised to tackle the unemployment rate, which is around 8% in Sweden, slightly lower than the EU average. However, the unemployment rate among youth, in some regions of the Scandinavian country, is above 25%. Immigration policy, and improving Sweden’s educational system were also hot topics.

Despite the success of the Sweden Democrats, all the other political parties in the Parliament have sworn that they won’t cooperate with the far-right party. However, as results from the different municipalities were gradually revealed on Sunday night, party leader Jimmie Åkesson was very cheerful.

“Now we’re Sweden’s third-biggest party,” Åkesson said at his group’s election party. “We have doubled our mandates since the last elections and I think it’s amazing. We’re going to be the absolute king makers,” he continued.

Over the last week, the Swedish election campaign was everything but boring. On Thursday (11 September) during a live TV debate, Löfven gently ‘pushed’ the leader of the Centre Party, Annie Lööf, when she walked to him to give him papers on nuclear power in Sweden. That prompted Reinfeldt to say that Social Democratic men are “arrogant and don’t know how to behave.”

On Sunday, the Swedish tabloid Expressen declared on its front page, “Vote today, but say no to racism”. The paper was subsequently denied access to the Sweden Democrats’ election night party.

Despite the good elections result on Sunday, the Sweden Democrats had a difficult campaign. The party was forced to withdraw some candidates over racist comments, including one local politician who stated that asylum seekers who has raided an asylum home “should be shot in the head”.

Meanwhile on Thursday, Swedish public broadcaster SVT also revealed that Åkesson lost 500,000 Swedish crowns (€54,102) this year on obline casino games, which is more than he earns per year from being member of Parliament and party leader. Åkesson, who has said he wants to become prime minister, denies being addicted to gambling.

Sweden's conservative Prime Minister Fredrik Reinfeldt won the general elections in Sweden on 6 October 2006. His party, Moderaterna, has since let a centre-right government, called The Alliance, together with the social liberal Centre Party, the liberal People's Party and the Christian Democrats.