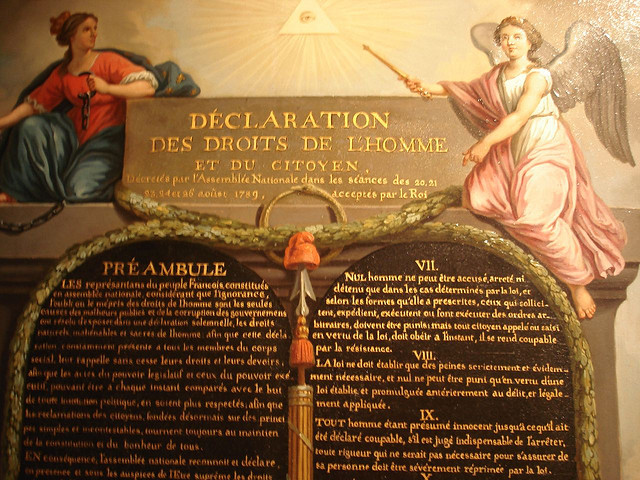 The Declaration of the Rights of Man and of the Citizen (Déclaration des droits de l'homme et du citoyen) of August 1789. [Hotels Paris Rive Gauche/ Flickr]

Political observers from across Europe believe that France’s image will be harmed if the far-right National Front party wins the EU elections. France is already considered the “sick man of Europe” and partners are worried that the country’s influence on the European and global stage could be further dented. The EURACTIV Network reports.

Jean-Christophe Cambadelis, the leader of France’s ruling Socialist Party, declared on Sunday (18 May) that “France will be faced by global astonishment” if the National Front (FN), comes out first at the European elections this weekend.

“The land of human rights will suddenly become the land of exclusion,” he warned.

He is not alone. Outside France, the rise of the far-right is reason for concern.

Although experts concur that the FN’s rising popularity stems largely from the economic crisis, German analysts also fear that the rise of the French far-right will weaken the EU’s foreign and security policy.

“One must question what is actually happening in France and why the French are suddenly voting for a party that many categorise as right-wing extremist,” said Dr. Stefan Seidendorf, responsible for the Europe department at the German-French Institute in Ludwigsburg, Germany.

“The economic crisis is more of a challenge in France than in other EU countries. Issues of migration and the treatment of minorities play an important role,” he observed.

However, Seidendorf believes the FN’s predicted victory will not further weaken France whose influence in Parliament is already small because the country sends the wrong candidates to Strasbourg. According to Seidendorf, French MEPs do not take their Parliamentary work seriously enough, showing a destructive attitude.

Regarding the FN, the party is currently not part of any political group and therefore barely exerts any influence in the EU Assembly, Seidendorf continues. Even if the FN were to get 20 MEPs, the other 55-60 French MEPs will continue to support EU legislation in their different European political groups. Fewer active French MEPs would affect France’s negotiating weight in the European Parliament, especially compared to Germany, which will still have 99 MEPs. And although the UK and Italy are also likely to see an increase in the number of Eurosceptic representatives, it will be to a lesser extent than France.

In Greece, the rise of Marine Le Pen is considered dangerous and “repulsive” both for Europe and France. New Democracy, the ruling centre-right party, attributes this to the “failure” of the Socialist French President, François Hollande. The centre-left party, Democratic Left, believes that this phenomenon goes against France’s democratic past.

“It’s precisely like Greece, where a neo-Nazi party has chances to get more than 10% of the vote,” the Democratic Left candidate Andreas Papadopoulos told EURACTIV, referring to the populist and nationalistic Greek party, Golden Dawn.

“It is repulsive for any country, but especially for a country that has deep democratic traditions, the country of the Enlightenment. Marine Le Pen does not abide by any principle related to Enlightenment. It is obviously a dangerous phenomenon and if she does well in the elections, the EU will not be able to ignore it,” he added.

“It is proof of Francois Hollande’s decline, as we deal more with his personal life than his political one. Marine Le Pen’s rise is also driven by France’s divided centre-right party, the UMP, which has focused on its internal reconstruction and not on the country,” said Ioannis Smyrlis, the Secretary General of the International Relations department of New Democracy.

“She is extreme-right and dangerous for Europe and France,” he concluded.

In Bulgaria, the National Front is considered a sister of nationalist Ataka Party, albeit the French force is seen as less extremist.

Bulgarian media was surprised when Marine Le Pen distanced her party from Ataka, a party famous for its anti-Turkish and anti-Roma rhetoric. She criticised France’s former Minister of , Pierre Moscovici, for the Socialist Party’s tolerance of “the real far-right”.

This is one of the many statements that effectively make any future collaboration between the National Front and Ataka impossible.

For most central European countries, the impact of the National Front vote will be limited by record high absenteeism levels.

This is not just the case for France. French participation levels are in freefall, as absenteeism rates reach 61%. But there are other countries where absenteeism is even greater.

“The Brits are not at all interested in the European elections in their own country, so they are not pressed to know what is happening in others. The media here concentrates solely on UKIP, which does not just reject the EU, but all politics: a classic protest vote,” said Eric Albert, London correspondent for Le Monde.

“In this context, the National National Front is a distant problem. Having said that, those who look closely into European politics can make two conclusions: France is the ‘sick man’ of Europe, the National Front vote proves this; (and) the European project is staggering, because even in France, Euroscepticism is on the rise.”

Polish media does not give much attention to France, but instead focuses on the UK and Germany, where there are strong Polish communities.

Outside Europe: Switzerland, Japan and the US

Switzerland, although not concerned with rising populism in EU member states, is well aware of the impact that the European elections can have at home. Swiss media follows the EU elections and increasing Euroscepticism closely. The EU elections will shape future relations between Bern and Brussels, which have been turned upside down since a vote in February which saw a majority of Swiss people vote “against mass immigration”. This means updating current bilateral agreements with the EU.

In Japan, the rise of the FN is seen as a direct reaction to fears about immigration. Japanese society relates to France’s rising far-right movement, because of similarities between France and an isolated Japan that fears Asian immigrants, especially from China. “Japanese media focus on the clash between the two big French political parties. However, it does not believe that this reflects the population’s sentiment, which also fears immigration,” explains Hiroaki Miyagawa, the Paris correspondent for the Japanese newspaper Mainichi.

In the US, the media continues to cover political developments in France as something strange and distant. “Having been damaged by the election of a socialist president, Marine Le Pen’s anti-European and nationalist arguments will not be enough to revive France’s waning image in the US,” said an AFP correspondent, who also claimed that Americans had a tendency to distrust anything that undermines capitalism. The rise of the National Front, with promises to leave the Eurozone and increase protectionism, is not consistent with ongoing talks for a transatlantic free trade area. The advance of America’s Tea Party movement has influenced politics in the US and contributes to trivialising the rise of extremism in Europe.

This would make the European elections a de facto race for the Commission president seat, would politicise the campaigns and could increase voter turnout, they say. Read more in our LinksDossier. Other politicians believe that choosing a top candidate is not the ideal solution. Van Rompuy has called for caution numerous times: the European Council could choose a different candidate from the party that wins.