Schulz: ‘My lack of experience is an advantage’ 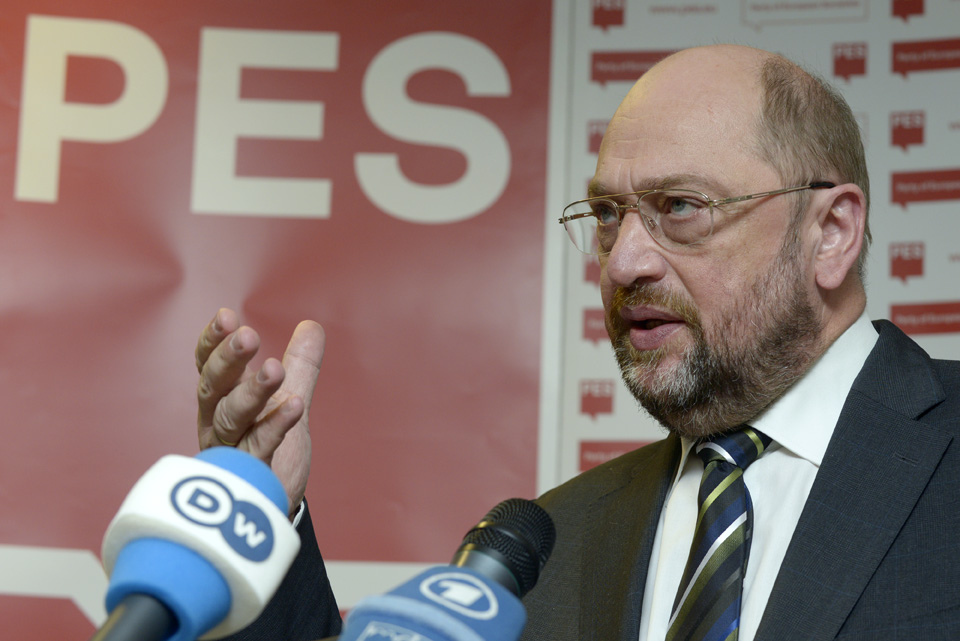 Martin Schulz, the socialist candidate for the May EU elections, launched the European socialist party’s campaign in Rome over the weekend under a motto of power redistribution – Brussels should only address the “big” topics and give citizens more room for manoeuvre. EURACTIV reports from Rome.

If the Party of European Socialists (PES) were to sum up this year’s European elections on a cheat sheet, it would read: ‘less is more’ – ‘always speak with a common voice’ – ‘explain the world’s complex issues in a simple way’.

The party’s election congress in Rome last Saturday (1 March) closely followed this pattern. In the vote over a top candidate there was only one choice: German MEP Martin Schulz, current president of the European Parliament.

There was widespread support for the 58-year-old. Delegates from the otherwise-scattered PES group, consisting of 33 member parties, submitted 368 votes in favour, 2 votes against, and 34 abstentions. The latter group belonged primarily to the British Labour Party, who – in view of the upcoming 2015 parliament elections in the United Kingdom – want to give the Eurosceptic David Cameron as little room for attack as possible.

But making the Social Democrats the strongest power in the European Parliament is not Schulz’s only goal. He also wants to become the successor of Commission President José Manuel Barroso.

Schulz: ‘I want to reform the Commission’

Schulz began his political career as Germany’s youngest mayor in the small town of Würselen in the state of North Rhine-Westphalia. Next, he shifted to the European Parliament, becoming the institution’s president in 2012.

As a result, Schulz has little experience in government – at least in comparison to his competitors from the European People’s Party (EPP). The conservatives will select their top candidate on Friday (7 March), choosing either former Luxembourg Prime Minister Jean-Claude Juncker or the current EU commissioner for the internal market and services, Michel Barnier.

But the self-confident Schulz sees his inexperience as an advantage. “I want to reform the Commission. For this, a new view of the administration is needed. My parliamentary background and my basic experience as mayor will be very helpful in this regard,” Schulz told EURACTIV.

The fact that Schulz is a German, is “not a matter of course” said the head of Germany’s Social Democratic Party (SPD), Sigmar Gabriel, in Rome. Rather, it is a “sign of trust in German social democracy”, the vice chancellor said.

The fact that even social democratic parties in southern European countries are backing Schulz, makes it clear that they see him as a “dedicated European”, said MEP Matthias Groote in an interview with EURACTIV.

But PES President Sergei Stanichev might pose another problem for the upcoming election campaign. In an interview with EURACTIV France, Jean-Michel de Waele, a political science lecturer at Brussels university ULB, explained why Stanichev is apebble in Schulz’s shoe.

The reason can be traced back to dwindling support for Stanichev back home in Bulgaria and the indirect support he gets in the Bulgarian parliament from the right-wing Ataka Party. On top of that, the EPP have criticised Schulz over a conflict of interest involving a €60,000 contract awarded to Stanichev’s wife.

Schulz denied any connection between Stanichev and the EU election campaign. “If Stanichev has political problems, he should please settle them at home. However, that doesn’t play a role in the next months of the campaign,” the German Social Democrat said.

‘Reconcile the EU among voters’

In Rome, Schulz did not tire of showing off his European profile. Portions of his speech before the delegates were held in four different languages.

At the same time, he painted a picture of the future in which the EU is leaner, closer to the citizens and socially more fair, an EU which reconciles itself with voters. As it stands, the Commission tends more towards restricting people’s lives, Schulz pointed out.

For this reason, the power of the EU must be redistributed, Schulz explained, saying: “While people do feel EU regulation has an affect on their daily lives, they do not feel as though they have any influence. In that case it makes sense to consider restoring competences to the member states, regions and communities.”

If Brussels wants to meet its international commitment to reduce water consumption, it does not make sense to regulate shower heads, Schulz said, indicating: “Water use in northern Sweden is completely different from that in southern Spain”.

Henceforth Brussels should be limited to concentrating on the “big questions”, such as the fight against tax evasion, youth unemployment and climate change, Schulz argued.

“120 million Europeans live in poverty or under its threat. That is shameful. 27 million Europeans who want to work cannot find a job”, the EP president explained. Youth unemployment must have top priority in the coming years. In part, the necessary funds should come from the financial transaction tax and resulting from the fight against tax fraud.

“Multinational companies cash-in on billion-euro profits without having to pay taxes. That is a scandal. Taxes must be paid where profit is gained”, Schulz said.

Prosperity and growth were the common denominator in Rome. Whether from Italy’s newly designated prime minister, Matteo Renzi, or Austrian Chancellor Werner Faymann, the event’s dialogue was dominated by promises of a better future, in particular for young Europeans. Other pressing topics, like foreign policy, were not even mentioned, even though, the congress took place in the shadow of the ongoing crisis in Ukraine. Only isolated speakers referred to Europe’s historical responsibility with regard to its eastern neighbour.

“The EU was created as an attempt at peace. Whoever looks at Ukraine today, knows what happens when Europe’s power for peace does not take effect”, said Gabriel.

“In the future, Europe should not only secure peace and prosperity internally, but must also grow closer together. Europe will only have a chance at being heard in the world if it stands together,” Gabriel said, accepting the perhaps empty phrases of the unanimously accepted election manifesto. Neither Gabriel nor other social democrats could agree on concrete demands or even a resolution.

The issue of data protection was also masterfully circumvented and not even mentioned once in the five-page manifesto. Its predecessor from 2009 contained 55 pages.

Birgit Sippel, data protection expert in the European Parliament and second on the SPD’s European candidate list, was forced to do without the issue. “We must focus in on certain key points in the elections. We cannot come out with a basket of 20 political areas. That would overwhelm people”, Sippel told EURACTIV.

Shortly after being named the top candidate, Schulz received opposition from several factions in the European Parliament. They are calling on Schulz to give up his office as Parliament president without delay.

“The role of head of the Parliament – the only democratically elected institution in the EU – should not be mixed up with the clear party politics involved in a candidacy-role for European Commission president”, explained the chairman of the Greens/EFA group in the European Parliament, Rebecca Harms and Daniel Cohn-Bendit.

But Schulz intends to continue – as both Parliament president and top election campaigner for the PES. Several thousand voluntary activists stand behind him with an ambitious campaign.

They have taken Barack Obama as a role-model with #knockthevote: planning to go from door-to-door along with candidates in the 28 member states.

“We want to knock on people’s doors – on real and virtual doors”, explained Marije Laffeber, deputy secretary general of the PES. In social networks and in personal discussions the activists will do the work of convincing people to go the ballot box.

According to Schulz: “Every percent more in election participation is another percent for us.”

Elections are contested by national political parties but once MEPs are elected, most opt to become part of transnational political groups. Most national parties are affiliated to a European-wide political family so one of the big questions on election night is which of these European groupings will exert greater influence on the decisions taken in the next legislative term.

The European Council must take the election results into account when choosing a nominee for the post of president of the European Commission, the executive arm of the EU.

0 responses to “Schulz: ‘My lack of experience is an advantage’”