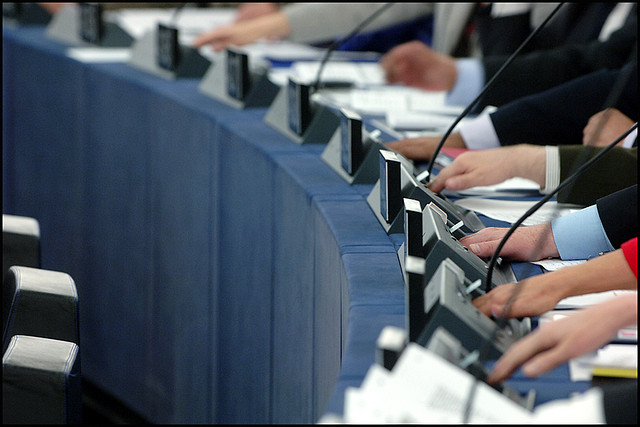 The President of the European Parliament will be elected by secret ballot today, 1 July. Martin Schulz is the favourite to beat the three other candidates, having already secured a coalition of 479 MEPs. EURACTIV France reports.

The next President of the EU Parliament will be voted on by secret ballot today.

“We wonder why. Choosing a president is an important vote,” said an expert from the European Commission.

Article 169 of the European Parliament’s rules of procedure outlines that nominations are done by secret ballot, or when requested by at least one fifth of the Assembly.

Secret vote for all nominations

The European Parliament is no stranger to chain voting on legislation, either by raised hand or electronic voting, as it pushes through so much legislation. An MEP sometimes has to raise his or her hand 50 times in one morning – a real challenge.

Resorting to secret voting for an institution that takes pride in its transparency is an exception. The reason for the secrecy is through fear of pressure from other MEPs. Although the secret ballot will also be used on 16 July when voting on the new president of the European Commission, it is unlikely to be used thereafter. Indeed, it is considered risky.

Three of four candidates are left-wing, for a right-wing parliament

The secret nature of the vote has left it open to much speculation. “I have no intention of voting for him, regardless of my party’s instructions. He voted to reduce the European budget in late 2013, which really goes against my beliefs,” said a French MEP.

The vote is unconventional: three of the four candidates are from the political left, even though it is widely acknowledged that the right won the EU elections. The British Conservative’s candidate, Sajjad Karim, is the only candidate from the right and has little chance of coming out on top due to the isolated position of his party within the parliament.

The European Greens decided on 25 June to present Ulrike Lunacek from Austria. Lunacek is running because “it is important that the European Parliament does not boil down to accepting or not a package of strategic jobs,” she says.

The far-left candidate, Spain’s Pablo Iglesias, based his candidature along similar lines.

Martin Schulz’s nomination seems like a sure thing, thanks to a deal between the Parliament’s three main groups. The European right (EPP with 221 MEPs) and the liberals (ALDE with 67 MEPs) will not be challenging the Socialist Party (191 MEPs), because deals have already been struck for other EU top-jobs.

The position can then be contested by the Liberal’s charismatic leader, Guy Verhofstadt, who seems more interested in a political position than a representational one.

“The outgoing president is the first to give the presidency a strong political role, and dragged the European Parliament out of the shadows,” said Charles de Marcilly, Head of the Schuman Foundation in Brussels. The role is no longer symbolic, which explains why it is so coveted this year.

Although Martin Schulz is the favourite to win today’s vote, the rules of procedure of the European Parliament stipulates numerous rounds of voting if he cannot get an absolute majority (376 votes).

The vote will be conducted by the interim President, Gianni Pittella. Parliament rules were quickly changed in May 2009 to prevent the eldest MEP from organising the handover of powers. It was, and still is, Jean-Marie Le Pen, the founder of France’s far-right party, the National Front.

Newly elected MEPs will sit in the Brussels on 1 July 2014. This is the first time since the May 25 European elections.