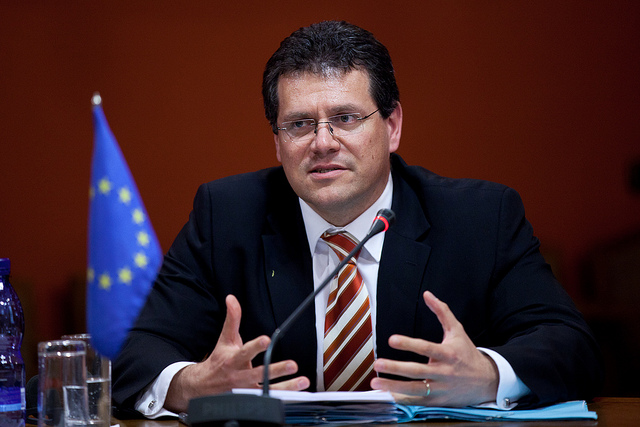 During his hearing, Maroš Šef?ovi? leveraged his experience as Vice-President of the European Commission for inter-institutional relations, especially when it came to dealing with MEPs, and his familiarity with Commission policies. EURACTIV Slovakia reports.

“In transport infrastructure, we need to think 20-30 years ahead,” the Slovak Commissioner-designate told MEPs in his introductory speech. He tried to sell the portfolio as being key to the EU’s competitiveness, both to MEPs and back home in Slovakia, where Šef?ovi? imagined obtaining an “important economic portfolio”.

“A fulfilled pre-election promise,”  Maroš Šef?ovi? dubbed his assigned portfolio. Running at the top of the Social Democratic Party Smer-SD list in Slovakia, he attracted the highest number of votes, however under the lowest electoral turnout in the whole EU (13 %).

Social issues high on the agenda

A significant proportion of questions tackled social issues in transport. Maroš Šef?ovi?? insisted that any modernisation in transport infrastructure should not happen to the detriment of social standards, highlighting the need for social dialogue in EU transport policy development.

Concerning the mobility of persons with disabilities, he referred to the efforts of Commissioner-designate Marianne Thyssen, aimed at tabling a European Accessibility Act.

Looking at Šef?ovi?´CV, filled with diplomatic posts, a Swedish MEP raised questioned whether he is the right man to fill a position that will have impact millions of physically “hard working” people.

“I have lived in a country where, in the past, summer manual work in state companies was compulsory for every university student,“ Šef?ovi? replied. “I know what a hard work is.”

Building on his previous question, the Swede asked about social dumping in road transport. Faced with the competition of truck drivers from Eastern Europe working for 1/3 of the local wage, many firms went bankrupt in Sweden, the legislator said.

Social dumping needs to be addressed, the Slovak nominee answered. “We will look into how we can simplify the rules and make them clearer, because this way their enforcement will improve. National authorities must help, because it is up to them to enforce.”

The ECR coordinator addressed the problem of Russia charging European airlines for flights over Siberia, which goes against the international arrangements.

The problem is long-term, since Russia did not honour its pledge to scrap the fees before joining the WTO, replied Šef?ovi?. European companies pay Russia 300 million euros annually, while Moscow subsidizes Russian airlines. “I do not think this is right. We need to convince members states to speak with one voice on this,” he said.

One MEP told Šef?ovi? that the EU’s space policy was an “expensive, prestige space project” at the cost of taxpayers’ money that does not bring benefits to ordinary people, and only serves as a “pathetic” attempt to compete with the Americans.

“I do not agree with your description of the EU space policy, Šef?ovi? replied. “I am convinced, we need our space program, we need our autonomy, it has nothing to do with prestige, we need it for our high-tech industry, for our transport system, to address congestion and even for banking industry.”

German efforts to introduce tolls for foreign drivers could inspire populists from other member states to go through with the re-nationalisation of member state roads.

Queried about this possibility, Šef?ovi? said he needs to see what the German government is going to propose exactly.

“We, in Europe, are good at building infrastructure, put we are getting poorer in maintaining it,” he said. “We need a system that charges every user.  We should think how we can modernize it. Distance system is fairer than (a) time–based system,” he argued. “We have the technology, but it it very sensitive to member states.”

“The system of non-discrimination is in the treaty and is dear too me,” he added.