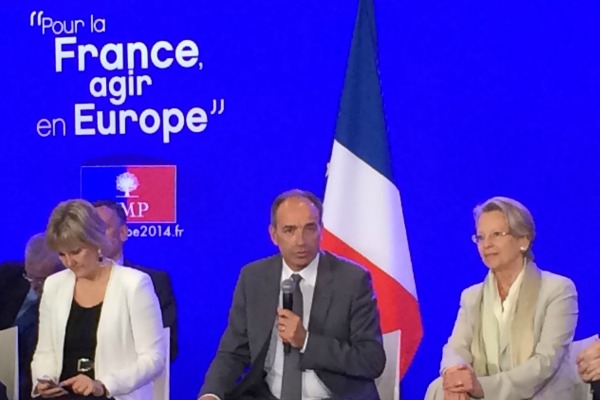 France’s centre-right UMP presented its platform, along with several candidates, for the European elections last week. But the leading opposition faction is divided, as debate on Europe rages within the party, and its programme refers to an exit of the Schengen area. EURACTIV France reports.

The UMP finally unveiled its political programme for the European elections on Thursday 24 April, but did not announce all of its candidates. The party still has to choose its representatives for the overseas departments and territories of France, and looks likely to wait until the last moment (2 May) to finalise its list.

The UMP’s European campaign required a lot of preparation, and sparked debate at the heart of the party, which is still struggling to present a united front on European issues.

Jean-François Copé, president of the UMP, stated on Thursday that “if you represent the UMP, you do not just say any old thing about Europe”.

‘We are not a populist party’: Copé

Disagreements are rife within the party, even among candidates for the European elections. Rachida Dati, candidate for the Ile-de-France consittuency and mayor of Paris’s 7th arrondissement, was not present for the launch. She recently supported Henri Guaino, former councillor to Nicolas Sarkozy and member of the French parliament, who declared that he would not vote for the UMP in the European elections because Alain Lamassoure was top of the candidate list.

“I will not vote for the embodiment of a political line contrary to my beliefs and the interests of my country,” Guaino stated. Rachida Dati’s response was that “Henri Guaino was an important voice in the UMP,” showing little solidarity for her fellow candidate.

Laurent Wauquiez, mayor of Puy-en-Velay and former Minister of European affairs, recently claimed that Europe had to be “exploded” and advocated on behalf of protectionism.

“We have had intense debates, and some ideas did emerge… but the party will not endorse them,” Copé said. Referring to protectionist calls within the UMP, he cited Alain Juppé, a leading centre-right figure of the party in the 1980’s and 1990’s who said that it was “a stupid idea and he was right!”

“Others argued for a Europe of six, without Luxembourg… this is all well and good but completely absurd, so it must stop: we are not a populist party, we are a governmental party”, Copé stressed.

The first proposal of the programme backs a Europe that is “certain of its borders”.

The UMP wants to put in place a “common discipline on borders and a Schengen policy by appointing a Commissioner for immigration”.

The programme claims that “without serious advances in the next 12 months, we will have to suspend France’s participation in the Schengen agreement”.

When EURACTIV France asked Copé about the modalities of an exit from Schengen, he answered: “Schengen does not work well and lacks political guidance, which results in porous borders. It is also because France is not being heard in Europe.” Copé is conscious that his party is not in power and therefore cannot make France exit the Schengen area. Nevertheless, the party wants to push proposals in the European Parliament to alter borders.

“We could increase financial support to Frontex, which is allowed by the Lisbon Treaty allows and should already have been done,” claimed Michèle Alliot-Marie, a prominent member of the UMP.

“When I was in government, I asked that we postpone the accession of Bulgaria and Romania to the EU, and that was granted. But today, France says nothing on the matter, and furthermore it lets itself be overwhelmed by migration flows,” stated Brice Hortefeux, UMP candidate in the European elections and former Minister of the Interior. Hortefeux also pointed out that the number of deportations and expulsions in France fell by 25% whilst regularisations have increased by 30% in 2013.

The rest of the UMP’s political programme is less surprising, including a Small Business Act and Buy European Act, which would give industrially productive countries preferential access to public procurement in the EU. This is a response to the Buy American Act, which requires the United States government to favour US made products in its purchases.

“It is essential that the European Central Bank, as well as its fight against inflation and for monetary stability, should promote economic growth and job creation,” confirmed the UMP, which wants “fiscal and social convergence to be at the heart of the European Union”.

The UMP calls for a Europe calibrated according to the skills of each member state: Finland and the UK would focus on nuclear power, the southern countries on immigration issues, and the UK, Spain and Ireland on maritime issues. It is also campaigning for the EU to adopt a common defence policy and pool defence resources.

The UMP, France’s leading mainstream conservative party, is the last French political party to present its programme for the European elections.

As opposed to previous elections, the UMP will not campaign with the French centrist party UDI, who have chosen instead to work with their centrist allies MoDem under the banner of “The Europeans”.

The UMP plans a short campaign lasting just under one month. Hundreds of meetings are planned, as well as the printing of 6 million leaflets and posters. The campaign will end with a large meeting on 21 May 2014.