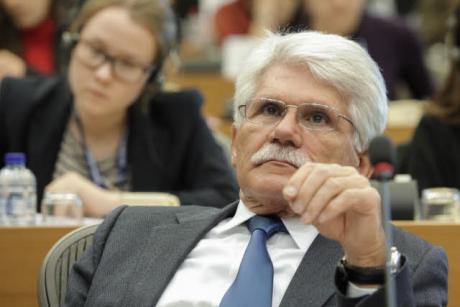 Portuguese MEP Vital Moreira is the country's most active in drafting reports, putting Portugal in first place in the VoteWatch ranking. [EP]

Pro-Europeans in Germany will be satisfied with the results of a new study: German MEPs are the most diligent – at least in submitting co-decision reports – and on average MEPs from the 15 “old” EU member states are considerably more engaged than their colleagues from the 13 “new” members. EURACTIV Germany reports.

Conducted by researchers from NGO VoteWatch Europe, the study evaluates attendance and voting behaviour of officials in the European Parliament.

But German MEPs, in particular, were among the most productive. In the context of the European Parliament’s co-decision procedure (officially “ordinary legislative procedure), officials from the Federal Republic composed the most reports on average during the current parliamentary term, which is due to end after this month’s elections.

Results show around 0.8 co-decision reports on average per German MEP.

Ranking at the bottom of the list are Malta and Lithuania, whose MEPs did not contribute a single report to the legislative procedure up to January 2014.  The same applied to MEPs from the youngest EU member, Croatia, which joined in July 2013.

The study assesses the parliamentarians’ activities, according to several indicators. In addition to the number of written reports, researchers took into account opinions, reports amended, parliamentary questions, the signing of motions for resolutions, and participation in roll-call votes.

Population-wise, the study’s results reveal another trend: MEPs from highly populated member states usually showed mid-range levels of activity, while officials from small states sometimes belonged to the most active and sometimes to the most passive. The Baltic States and Malta received the weakest average scores.

First place for Portugal is a “quirk”

Upon closer examination, however, the results were skewed somewhat due to an outlier in the results for co-decision reports. Despite the markedly high activity of German MEPs, the table showing the report numbers does not rank Germany at the top of the list.

Instead, the Federal Republic is only in second place, placing just under Portugal. Southern European MEPs have contributed an average of 1.9 reports to the co-decision procedure since 2009, more than double the rate of their German colleagues.

Nevertheless, this result should be taken with a grain of salt. “Portuguese MEPs drafted the most reports, thanks largely to a procedural quirk which has handed a large number of rapporteurships to Vital Moreira, Chair of the International Trade Committee,” the study said in a press release on Tuesday (6 May).

Concerning roll-call votes, Austria ended up with the highest participation rates from MEPs, with over 90%. Slovakia and Luxembourg followed with only slightly lower percentages.

These results are telling, according to the study, as roll-call voting participation is a good indicator for attendance in plenary sessions.

German MEPs took part around 87% of the time, on average.

Meanwhile Malta, Greece and Lithuania showed the worst performance. Every fourth MEP in their ranks did not participate in the roll-call votes.

Representatives from Portugal, Greece and Ireland – all crisis states – turned out to submit by far the most parliamentary questions to the European Commission and Council of Ministers. This activity is a useful instrument among MEPs, the study indicates, to direct the institutions’ attention to a certain concern.

Here too, a pair of Portuguese members stands out of the crowd: Together, Diogo Feio and Nuno Melo submitted more than 1,400 parliamentary questions.