Jan Zahradil is a Czech politician for the Civic Democratic Party. He has been a Member of the European Parliament since the Czech Republic entered the European Union in 2004. Zahradil also served as Member of the Chamber of Deputies from 1998 to 2004.

It has recently been revealed in the Czech media that you have decided to stand for the President of the European Commission. On your Twitter account, however, you stated that you are not interested in this position. So, what is your explanation?

In the previous elections in 2014, the European Parliament invented the so-called “Spitzenkandidaten” system, which means that each of the European political parties will be represented by one electoral leader. It is intended to make the European elections more attractive.

The problem is that, at the same time, the European Parliament wants – and this is where I disagree – for the future President of the European Commission to be only chosen from these Spitzenkandidatens.

This is something our group disapproves of because we prefer to stick to the European treaties which state that the President of the Commission is picked by the European Council. So, such narrowing the scope for manoeuvre – which the European Parliament is attempting to do by bending the treaties to its favour – is something we disagree with.

I am therefore deliberately saying yes, I wish to stand for this election and be the ECR (European Conservatives and Reformists) candidate, but this does not mean that I consider myself a candidate for the President of the European Commission.

However, the Treaty of Lisbon states that the European Council, when nominating a candidate, must consider the results of the European elections. How else can this condition be met?

The European Council members always used to meet and discuss a prospective candidate until they made their final decision. In this way, former Commission President Jose Manuel Barroso was elected.

I have the impression that a new clash between the European Council and the European Parliament is now approaching, as the German Chancellor Angela Merkel agrees with appointing Manfred Weber (Chairman of the Group of the European People’s Party, EPP) to the role of EPP Spitzenkandidat, adding however, that this does not guarantee him the position of the Commission President.

French President, Emmanuel Macron is also in opposition to this proposal. So, it can be expected that those large countries will be strongly against making the winning party’s candidate automatically the President of the Commission. 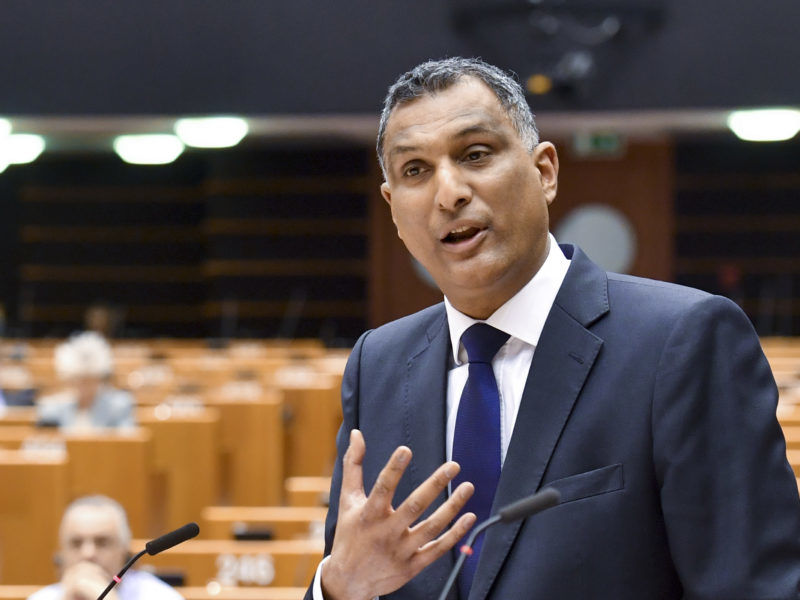 “I would like to see a deal where we couldn’t perceive the UK or the EU as winners or losers. Where the UK is no longer a reluctant tenant of the EU but we are good neighbours,” ECR chief Syed Kamall told EURACTIV Poland.

One of the arguments in favour of introducing the Spitzenkandidaten system is to boost the EU executive body legitimacy. Isn’t this a right way to strengthen the influence of European voters on who will lead the Commission for another five years?

I do not think so, because I am convinced that even those candidates who pass their party selection procedure and who are selected as Spitzenkandidaten on behalf of their political groups, are known almost exclusively in their native countries. I recognize however that if Angela Merkel stood for the Commission chair, perhaps most Europeans would know her.

It seems obvious that a name itself does not generate more popular support, and last European elections clearly proved that the Spitzenkandidaten system did not work at all.

Another reason to apply this procedure once again is to increase the popularity of European elections. Slovakia and the Czech Republic have the lowest voter turnout in the EU. How else can we ensure that more voters come to the polls in May?

I am not entirely nervous about the low turnout in some countries. Some people simply see it this way. Many of them apparently think that they cannot influence anything through elections to the European Parliament. Those really interested in the EU will come to the polls, and I always say that anyone who wants to find some information about the EU has countless ways to do so.

There is enough information about the European elections in the media.

We have a bicameral parliament in our country and there is also a low turnout in the Senate elections. I do not see this as a tragedy. Of course, the legitimacy of the European Parliament is not high, but the attitude of not voting at all is also legitimate.

What led you to decision to run for ECR lead candidate?

I think we (ECR) have a chance to claim a “common sense” position between the two extremes. The first, anti-EU extreme, is set to dissolve or to leave the Union. On the other hand, there is a fanatically pro-European extreme that wants to deepen European integration and unify everything; from taxes and social systems, to building a European army.

We do not want either of these two outcomes. Unlike the extreme anti-European parties, we advocate that the EU brings lots of benefits: a single market, a common trade policy, a customs union and a common border protection policy.

But, there are things we do not like: excessive bureaucracy, efforts to regulate almost everything, the overproduction of European legislation, the ambition to become a global political force, which is mainly promoted by France and Germany. We think for instance, that member states should have the freedom to pursue a foreign policy which best suits their own interests.

We disagree with plans to introduce a common asylum policy because that can only lead to redistribution of migrants and quotas. These are already off the table for now but there are debates about some sort of optional solidarity. There are therefore some policies we disapprove of and which we will try to do our best to get rid of.

I feel like after many years, this is finally the right time to reform the EU. Change is in the air and whoever gets hold of the momentum can succeed in the upcoming elections. 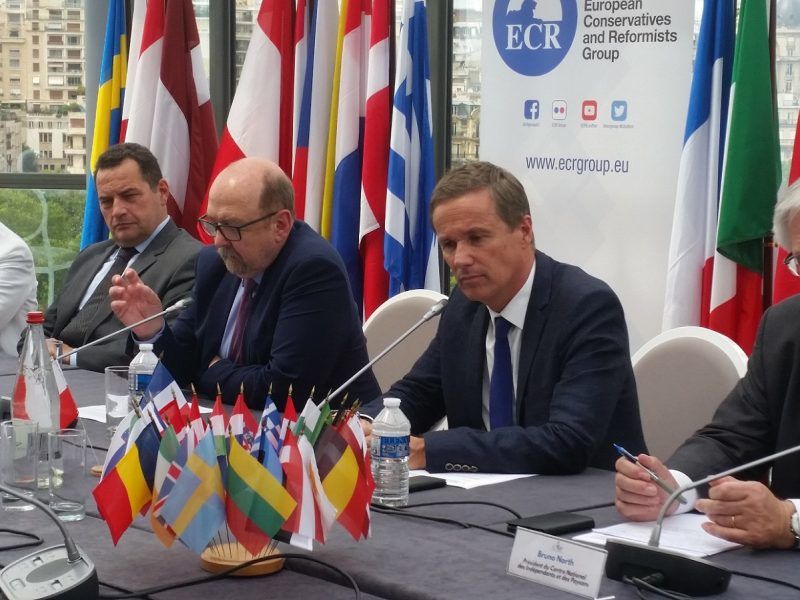 How big will be the regrouping of political forces in the European Parliament?

I expect a significant realignment. It is known that our group will lose twenty British MEPs after Brexit. We are aware of it and we must consider it when shaping our future faction.

The decline of the Socialist faction is generally expected, and it is almost certain that the European People’s Party will weaken too, although not that dramatically.

We have also witnessed how Emmanuel Macron persistently sends different ambassadors to the European Parliament, to attract the socialists, the people’s party, and the liberals, in order to build his own faction and European background. Hence, I expect a great regrouping and we want to  make the most of this opportunity.

Aren’t you worried about the future of the ECR group in the European Parliament?

We now have 76 Members and we would not only like to keep our current position, but we would like to grow in order to maintain our position as the third largest group in the European Parliament. Nevertheless, despite this reassembly of the forces I just mentioned, we think it is still realistic. I am certainly not worried about the future of the ECR.

Thus, the question is, how do you want to replace the British MEPs in the ECR? Which European parties do you see as your potential allies?

In any case, the Eurosceptic factions will collapse as UKIP and Nigel Farage are leaving. There are some parties that do not feel comfortable where they are right now. For example, not everyone who is critical of the EU wants to stay in the same group with Marine Le Pen, because it has a bad reputation. These parties will look for a new safe harbor and we will gladly offer it to them.

There have recently been rumors about ECR’s interest in cooperation with Italy’s Lega party, led by Matteo Salvini. Is it still the case?

This is definitely a party which we will speak with. It is the ruling party and the strongest right-wing body in Italy. Obviously, there are a number of differences between us, I’m not saying that it is a done deal, but we will certainly negotiate.

The movement never hid its admiration for Benito Mussolini. Even the chairman of the League, Matteo Salvini, used one of Mussolini’s famous quotes on commemoration of his birthday. Couldn’t this harm your political group?

Given that the EPP was not damaged by the fact that Mussolini’s granddaughter, Alessandra Mussolini sits with them, I think that our contact with the League will also not hurt us.

Doesn’t it bother you personally?

Even in the EPP, nobody has ever had a problem with Mussolini’s past or her relatives.

Have you been in touch with the representatives of the member parties of the ECR? How do you see your chances of becoming an ECR’s lead candidate?

The talks have just now begun. Before the election, which will be in October, we still need to clarify the nomination procedure. Only when I know who my opponent is, I can guess what my chances will be. But if I did not believe I had a chance, I would not be a candidate.

What will be the key topics in the upcoming European elections?

I hope that this will not be all about the migration crisis, although it will surely be a significant topic. For us, as net recipients of the EU budget, the question of the future financial framework will certainly be very important. We will emphasize legal cleansing in the EU. It was already promised by the previous Commission President Barroso, but then he forgot about it. One of our recurring themes will therefore be to clarify and streamline the EU legal order. And then certainly to maintain a flexible and multi-tier Europe.