Conservative chancellor Sebastian Kurz, who called for fresh elections on Saturday over the affair, said Kickl would have to leave office to ensure a “complete, transparent investigation” into the scandal that has ended a coalition many on the European right had held up as a model ahead of key European Parliament polls later this week.

Kurz’s FPÖ deputy, Heinz-Christian Strache, stepped down as vice-chancellor and party leader on Saturday after recordings published by German media showed him offering government contracts in return for campaign help to a fake Russian backer in a villa on the Spanish resort island of Ibiza. 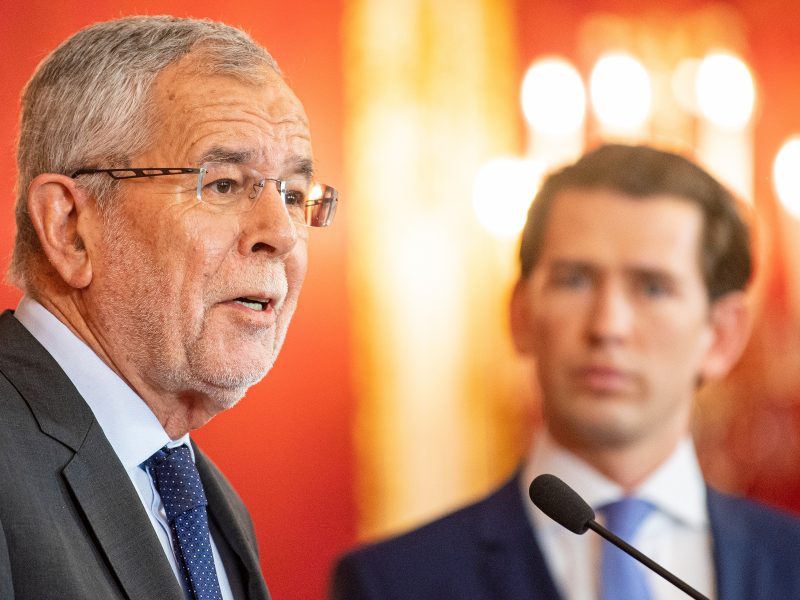 Elsewhere in the footage, Strache appears to hint at ways political donations could escape legal scrutiny.

The other ministers who are now set to follow Kickl out of the government include his colleagues at the foreign, defence, transport and social affairs ministries.

Kurz said the vacant posts would be filled with experts or senior civil servants until the elections which President Van der Bellen has suggested be held in early September.

A date will be fixed after Van der Bellen has spoken to all party leaders.

Norbert Hofer, who is infrastructure minister and took over the FPÖ leadership from Strache on Sunday, said Kickl had done “nothing wrong”.

Kickl was FPÖe secretary general at the time when any political donations would have been made. Strache on Saturday denied the party had received illegal funds.

“I feel very sorry that such a great government project ends so soon… I think this government was very popular,” Hofer told a press conference earlier Monday.

Kurz has said the recordings were the final straw in a string of FPÖ-related scandals, which have dogged the coalition since its formation in late 2017.

The most damaging recent controversy linked to Kickl was last year when the interior minister ordered raids on the country’s own domestic intelligence agency BVT.

Numerous documents were seized, raising fears among Austria’s Western partners about the possibility of leaks to Moscow.

The FPÖ has a cooperation agreement with President Vladimir Putin’s United Russia party.

Thousands of people demonstrated in Vienna against the government at an impromptu gathering in front of the chancellery on Saturday, as well as at a pro-EU rally on Sunday.

The 1999 song “We’re Going to Ibiza!” by the Dutch group the Vengaboys has also made it back into the Austrian charts, ranking third on iTunes and 75th on Spotify on Monday.

In an emotional resignation statement Saturday, Strache said he had been “stupid” and “irresponsible” but was the victim of a “targeted political attack”.

In the recordings — of unknown origin — Strache and a colleague from his party, who has also resigned, are seen talking to a woman purporting to be the niece of a Russian oligarch.

They discuss how she could invest and gain control of the country’s largest-circulation tabloid, the Kronen Zeitung, and install editorial staff who would help the FPÖ’s 2017 election campaign.

In return, Strache held out the possibility of awarding public contracts.

The Kremlin on Monday denied any involvement.

Waves outside of Austria

The scandal has already made waves outside of Austria as Europe prepares for European Parliament elections from 23 to 26 May.

Manfred Weber, the lead candidate of the European People’s Party (EPP), the largest grouping in the European Parliament, said the scandal showed that “these extremists must not be able to influence our Europe”.

German Chancellor Angela Merkel has also warned of the dangers of far-right politicians “for sale”, who wanted to “destroy the Europe of our values”.

The scandal may also dent the prospects of the far-right populist alliance marshalled by Italy’s Interior Minister Matteo Salvini, in which the FPÖ plays a key part.

Marine Le Pen of France’s far-right National Rally (RN) distanced herself from Strache, saying he had made a “grave mistake”.