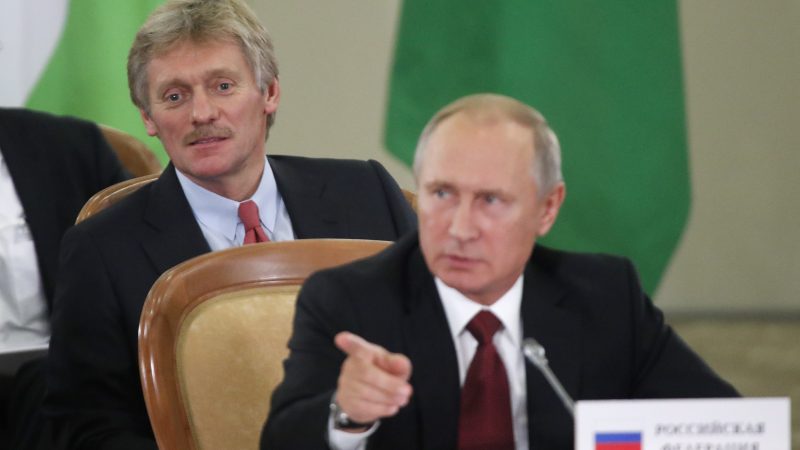 File photo. Russian President Vladimir Putin (front) and Kremlin spokesman Dmitry Peskov (back) attend a session of the Council of Heads of the Commonwealth of Independent States (CIS) in the Black sea resort of Sochi, Russia, 11 October 2017. [Pool/EPA/EFE]

A daughter of Russian President Vladimir Putin’s spokesman is working as an intern with a deputy on the European Parliament’s security and defence sub-committee, the French MEP told AFP Monday (25 February).

Aymeric Chauprade, who is also a member of the parliament’s foreign affairs committee, emphasised that Elizaveta Peskova, who is studying law in France, had no access to confidential documents.

Chauprade is Vice-Chair of the Europe of Freedom and Democracy (EFD) group, in which the largest force is UKIP, followed by Italy’s Lega. He was elected to parliament on the far-right National Front ticket with Marine Le Pen in 2014, but has since left her party and her ENF (Europe of Nations and Freedoms) group.

Parliament spokeswoman Marjory van den Broeke added that “in fact, Mr Chauprade himself has never had access to confidential documents.”

“Elizabeta, daughter of Dmitry Peskov, Putin’s spokesman, began her internship in November 2018” and will leave in late April when Chauprade’s term ends as well, he told AFP.

Here the aide of a French MEP and the daughter of the Putin's spokesman Yelizaveta Peskova shooting with the Chechen Spetsnaz and dancing with the Chechen warlord Kadyrov.@Europarl_EN should vet these aides and interns better, this is unacceptable.#EU #Russia #Peskov pic.twitter.com/fhukaR3L2y

Peskova cannot attend closed-door debates nor participate in the work of an EU/Russia delegation that Chauprade belongs to, he claimed.

But Christine Revault d’Allonnes-Bonnefoy, a French Socialist MEP, told AFP she was “alarmed”.

“This is really shocking. The daughter of the Kremlin’s spokesman is not just anybody. I am surprised this hiring was validated by the parliament personnel service,” she added.

Chauprade was an observer to Moscow’s referendum on Crimean annexation, and told AFP: “I have never hidden that I consider Crimea to be historically Russian.”

Meanwhile, the European Union expects to be targeted, in particular by Moscow, during the parliamentary elections in May.

The Kremlin press service was not immediately available for comment on the internship.

incredible. Peskov's daughter, 21 year old Elisaveta, is now an intern at @EuropeanParl, as assistant to French MEP Aymeric Chauprade. Chauprade was one of the French politicians brought to a Moscow "family values conference" at Malofeev's expense in 2014.

Peskov on Tuesday defended his daughter’s internship, saying it was nothing unusual and had “nothing to do” with his job.

“This is about an ordinary student and a normal internship,” Kremlin spokesman Dmitry Peskov told journalists in a daily briefing.

“It has nothing to do with my duties and my work,” he added.