Orbán, who has long flirted with far-right leaders from across the continent while professing loyalty to the centre-right European People’s Party (EPP), said he could no longer support Manfred Weber after he “insulted” Hungarians.

On Monday evening (6 May), Annegret Kramp-Karrenbauer, leader of Chancellor Angela Merkel’s Christian Democrats, signalled that the anti-immigrant, hard-right Orbán had crossed a river.

“With his behaviour in the last few days and the meeting with (Italian Deputy Prime Minister Matteo Salvini), he has given a clear sign that he will leave,” she told Reuters. The EPP had tried to build a bridge to Orbán, she added, but he had chosen another route. 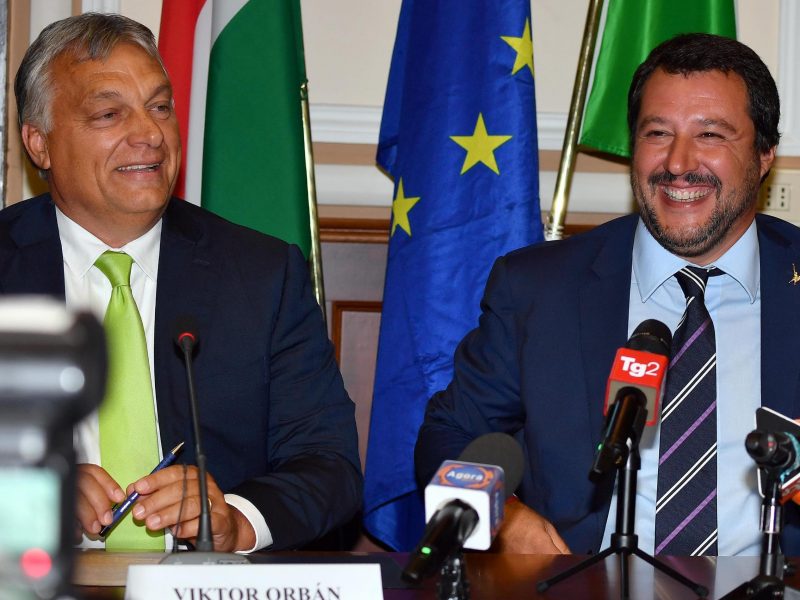 Losing Fidesz, whose grip on Hungarian politics means it delivers a large bloc of legislators to the European Parliament, would weaken the EPP after May’s European Parliament election, potentially costing the bloc its say over who succeeds Jean-Claude Juncker as president of the EU’s Executive Commission.

In March, Weber, a fellow German conservative, brokered a compromise under which Fidesz was suspended but not expelled from the EPP over concerns that it had violated EU principles on the rule of law.

Orbán did not say who he would back instead of Weber, but many analysts saw in the Salvini meeting a sign that the two anti-immigration populists wanted to set up a far-right group together in the European Parliament.

Orbán gave as his reason for dropping Weber a month-old interview that had been extensively reported in government-friendly Hungarian media at the time, making it plausible that Salvini’s visit last week was the real trigger.

In the 29 March interview, Weber said he would not accept office as commission head if he needed the votes of Orbán’s Fidesz party to do so, telling German ZDF television he wanted votes from across the spectrum to advance a centrist agenda.

Orbán cast Weber’s remarks, described by a Hungarian junior minister as an “insult to Hungarian voters” and widely reported in Hungarian media the day they were made, as an insult to the Hungarian people as a whole.

“Weber has said he does not want to be commission president with the votes of the Hungarians,” Orbán said, adding that this meant he could no longer support Weber – even though he was still describing Weber as an “outstanding” candidate five days after the original interview.

Orbán, who has cast the impending election as a choice between pro- and anti-immigration in Europe, has urged mainstream conservatives to forge an alliance with populist, nationalist groups after the vote.

The EPP has 217 lawmakers in the 750-strong EU legislature, 12 of them from Fidesz. Polls suggest it will lose seats but remain the biggest group. Far-right, populist parties are expected to perform well.

“Loyalty is an important political category,” Orbán said. “We would like to stick with the community where we have lived and worked so far. Unless this community tells us that our presence is no longer required.”