By Christoph Sebald and Robert Steenland 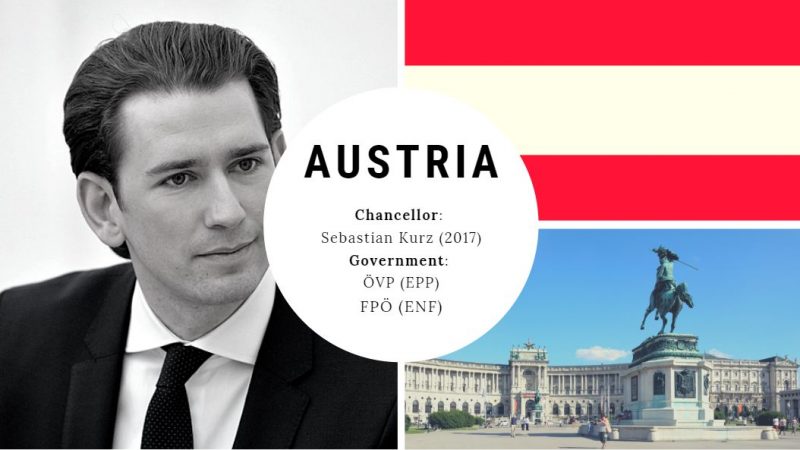 Austria joined the EU only in 1995, having traditionally been a neutral country, but has been part of the eurozone (1999) and Schengen (1997) areas since their inception.

Like Germany, Austria was occupied after WW2 and hosted Allied and Soviet troops until 1955, when it pledged its neutrality status. Following the end of the Cold War, it sought membership of the EU, for which it organised a referendum in 1994, where two out of three people voted in favour.

With a population of almost 8.9 million, it represents around 2% of all EU citizens (without the UK). Eighteen (2.7%) Members of the European Parliament are elected in Austria (nineteen after the UK’s exit).

In a sign of the country’s ambivalence, 38% of people regard EU membership as neither a good or bad thing. However, more people (70%) support the euro and feel (75%) they are EU citizens.

Austria has a strong and solid economy, confirmed by the European Commission’s (EC) latest autumn and winter forecasts that expects positive growth dynamics to continue, albeit recently slowing down like most of the EU countries. Austria also features robust economic indicators. It’s total GDP was €369.9 billion in 2017, around 2.8% of total EU27 (without UK) GDP.

Austria’s current political system is based on the Second Republic founded in 1945, which only fully regained independence in 1955 through the Austrian State Treaty, which resulted in the withdrawal of both Allied and Soviet troops. A Declaration of Neutrality by the Austrian Parliament prevented the country from joining any military alliance.

Austria is a federal parliamentary republic with a bicameral parliament. The most important political figure is the chancellor (currently Sebastian Kurz) who is the head of government. The head of state is the president (currently Alexander Van der Bellen), who has a symbolic and ceremonial role.

In recent years, the local political scene has been polarised over the issue of migration, as Austria is both an important destination and transit country, which brought the country in the centre of the migrant crisis in 2015.

Mainstream parties struggled to appeal to voters, many of whom opposed the grand coalition of the social democrats (SPÖ) and Christian Democrats (ÖVP), which have historically ruled most Austria’s post-WW2 governments.

Consequently, neither the SPÖ nor ÖVP party candidate reached the 2016’s presidential elections’ second round. Instead, Norbert Hofer of the far-right Freedom Party (FPÖ) faced off against Alexander Van der Bellen from the opposite side of the political spectrum – the Green Party – which resulted in a narrow win for the latter after the second round had to be repeated.

To reverse the trend, Chancellor Werner Faymann (SPÖ), who presided over a grand coalition with the ÖVP since 2008, decided to step down in 2016. He did so in favour of outsider Christian Kern, which led to regained political momentum against the FPÖ, the party which was back then leading in the polls.

However, the ÖVP, polling third at the time, soared in May 2017 after the then 30-year-old Sebastian Kurz took over. Kurz was foreign minister at the time and a rising star. He soon pulled the plug on the grand coalition, prompting snap elections.

This, together with the strategy of adopting FPÖ’s anti-immigration policies put his party in pole position for the parliamentary election in October 2017.

The election resulted in a coalition government composed of the ÖVP and FPÖ, led by Kurz. Ever since, the government has steered a pro-EU but anti-immigration course that has proved popular with a majority of the population.

It did upset its EU partners, however, and they were surprised by Austria’s refusal to back the UN Migration Pact in October 2018 and the fact that Austria’s Foreign Minister Karin Kneissl invited Russian President Vladimir Putin to her wedding amidst tense relations with Russia over the Ukraine crisis.

Recently Prime Minister Kurz made plans to have the Federal Office for the Protection of the Constitution and Counterterrorism (BVT) report to him directly, following the decision of other European spy agencies to curb ties, over the close relations the FPÖ (which controls the Interior Ministry) has with Vladimir Putin’s United Russia party.

Moreover, while the coalition has so far proved relatively stable, the ÖVP and FPÖ will fight each other for the European Parliament elections, in which the latter has made an alliance with Italy’s right-wing populist Matteo Salvini that opposes further EU integration, whereas the ÖVP is in favour of a stronger reformed EU.

The issue of whether to abolish the right of veto by EU member states on foreign policy matters has proven to be a dividing issue as well in the coalition. Therefore, as the future of the EU is being discussed and Mr. Kurz has called for a new EU treaty, it’s unclear whether the coalition will be able to come on terms on this.

Just days before the elections, a corruption scandal dubbed ‘Ibiza-gate’ shook the FPÖ, with Interior Minister Herbert Kickl being fired in the fallout that has brought down the government. All ministers from the country’s far-right party resigned and Chancellor Sebastian Kurz was forced to called for fresh elections.

It is likely that the affair will affect the outcome of the European polls.

Traditionally, smaller parties tend to receive relatively more support during EP elections compared to national parliament elections. Nonetheless, it will be the main parties of ÖVP, SPÖ and FPÖ that are expected to win nearly all MEP seats.

Based on most recent polling, it is expected that Kurz’s ÖVP (part of the European People’s Party/EPP) will end up first and win six (up one) out of the 19 total MEP seats for the EP. The party has enjoyed steady support of between 29-30% in the polls,

The SPÖ (part of the Progressive Alliance of Socialists and Democrats) will maintain five seats for the S&D political group with circa 27% support.

The FPÖ, which has lost some support since joining the ruling coalition, will nonetheless increase its number of MEPs to five (up one) with 23% support for the European Alliance of People and Nations (EAPN, formerly the ENF), which is to be formed after this year’s elections around Italy’s Matteo Salvini from Italy.

The liberal NEOS is expected to retain its current one seat for the Alliance of Liberals and Democrats for Europe (ALDE) with 8% support.

Things look bleaker for the Greens, who surged in 2014’s EP elections to almost 15% of support but did not pass the electoral threshold in the 2017 national election. This was a resulted of a split in the party, which led to the creation of a new party by former member Peter Pilz, which entered the parliament instead.

While the Greens have recovered in the meantime, they are expected to win just a single MEP with 7% of support (down two) for the Greens/EPA grouping. On the other hand, Pilz’s list for the EP elections is not expected to make it as the party polls below 2%.

Overall, the mainstream social democrat and Christian democrat parties will acquire most seats and remain dominant. However, this also shows the continuing popularity of the current governments’ right-wing direction and confirms that ÖVP’s move to adopt FPÖ’s more right-wing policies under Kurz has paid off.

Christoph Sebald works as an EU-Project Manager at the Ruhr Regional Association, as well as a guest lecturer on EU-Multilevel Governance at the Ruhr-Universität Bochum. He holds a double degree master in European Governance.